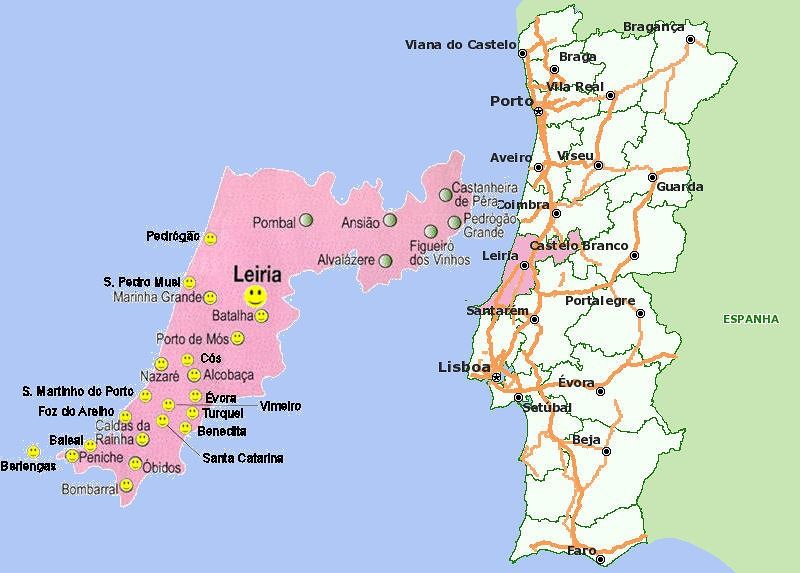 It’s the best of Portugal because…it’s mine, but I hope that, after your visit, you’ll agree with me.

Centrally located, and by the coast, Leiria district is strategically positioned to act as a touristic hub for a wide visit to Portugal. The district is minutes away from Lisbon, Coimbra or Santarém, and less than two hours from Porto, Aveiro or Evora.

More than that, it has some of the best attractions of Portugal. According to my personal preferences, here my local stars:

If you have time:
Vieira de Leiria, Praia de Pedrógão, and, of course… Turquel.

The first agricultural school was in Alcobaça, and the place from where agriculture spread to all the country, is still the capital of the most tasteful peaches and other fruits, though in a decreasing quantities, due to price competition from abroad.

However, the gem of town is the Monastery, that comes from the beginning of Portugal, and was the agricultural school.

Alfeizerão is a small village close to S. Martinho do Porto, in the old days at the edge of the water, that receded to the present distance.

To be absolutely honest, Ataíja has, for me, a single interesting point – a very, very good restaurant.

Is it enough to recommend it?

If you had to choose a single thing to see in Portugal, my advice would be: Batalha.

Only 10 km from Leiria, and 17 km from Fatima, this small town is the place for the best Portuguese masterpiece of Gothic churches.

​Batalha is also a fast growing economy, with several business centers, siding the main roads of the area.

Benedita was a village that fifty years ago grew at top speed, to become one of the biggest and richest settlements in Alcobaça county, bypassing the city of Alcobaça.

​Development slowed down, but Benedita keeps being a lively place, and one of the best places to buy cutlery and leather goods.
​

Loosing to several more visited places in the area, like Óbidos, Nazaré or Alcobaça, this fast growing town also has its interesting points.

For the lovers of sweets, Cavacas das Caldas are an exclusive pastry.

I forbid myself to show the most typical ceramic artifact of Caldas da Rainha. You must enter any of the several shops to see it, but… you’re right – that’s it.

In several sizes and capacities.

​The main beach of Caldas da Rainha, Foz do Arelho, mixes a large oceanic beach, generally with strong but regular surf, and a lagoon, with a large stripe of sand serving both sides.

At short distance from Óbidos, it gathers thousands of dwellers in summer, being visited all year around by those who want to eat the seafood locally produced.

With only a few hostels, it takes advantage of the well located campground, and the apartments for short term rentals.

The district’s capital, Leiria, it is not its main attraction, but it is a convenient hub for easy access to most of them.

​Furthermore, as a matter of fact, it has its own charms (not only the castle and the old quarter), justifying a stop for one or two days.

Marinha Grande is an industrial city, that in the 18th century became the capital of glass manufacturing.

For long a very ugly city, with the boom of tourism, the spectacular glass production led to great investments embellishing the city.

The show of glass is almost lost (only my friend Poeiras sem to keep working and the industrial plants don’t allow visits), but Marinha Grande is nowadays a nice city, with the glass museum as a special gem

Martingança is not a tourist destination, but is a growing industrial small city, with a good restaurant and… good friends.

​Do I need more to visit it?

​”Lost” in the middle of Aire and Candeeiros National Park, Mendiga is a combination of pure nature with tranquility.

A thermal city, Monte Real has an Air Force base, that local people wish to see transformed in a commercial airport to the central Portugal (why not?).

​It would be a very good idea, but meanwhile, it is only an extra attraction for some lucky kids, regularly allowed to visit the base, while the senior visitors seek thermal treatment.

Said to be created by Phoenicians, Nazaré is ethnically different from all the other Portugal.

The traditions, the costumes, the language, everything distinguishes them, and the site is magnificent, with a sea that was my dream in all my first 20 years (and more).

It shares with Portimão the top of the best places to eat sardines ( I know… I know… Peniche and Sesimbra don’t agree with me! But someone must occupy third and fourth places).

​Nazaré is a must in all the circuits in central Portugal.

Maybe the most visited attraction of the district is also the more distant from the capital (if we forget Berlengas, still farther, in the ocean).

​ Only 8 km distant from Caldas da Rainha, the walled city of Óbidos is a well maintained medieval town, giving name to the nearby lagoon.

Until 2017 I think that I only passed once in Pedrógão Grande, without stopping – I did it a few kilometers ahead, to stay a couple of nights in Pedrógão Pequeno, in the other side of Cabril Dam.

After the terrible fire of 2017, curiosity and solidarity mixed to take me to the suffering area in a free weekend.

Pedrógão Grande showed as a nice island in a black sea of ashes, but life went on, and recuperation had already started.

Somewhat ironic the signs at the entrance, celebrating the firemen. Locals recognize their effort and importance, but not even them could save dozens of people and their belongings.

The most important harbor in the centre of Portugal, Peniche is, obviously, a city devoted to fish.

Grilled sardines or “caldeirada” lead thousands to the local restaurants, while the trip to the Berlengas archipelago are a restricted challenge to a few hundreds a day in summer.

Politically Peniche is a symbol of repression, due to the use of the fort as a political prison during dictatorship.

​The visit is possible, and compelling.

A large beach, it is not one of the best in the district, because it is windy and the sea is rough.

​Not so crowded as the main beaches in the area, it is used by families and youngsters, attracted by the sportive activities in the beach and the good camping.

A beautiful bay progressively narrowed and shallowed, by the sand deposits, is one of the highlights of a coastal trip, allowing a stop between Foz do Arelho and Nazaré.

​If you want to swim, in S. Martinho do Porto the water is not very clear but it is the safest of our west coast.

A very old and small village, S. Pedro de Moel was for centuries a summer destination, combining the sea with the national forest.

In the middle of last century it started to grow, mainly with summer houses, the reason why it will probably have more houses than inhabitants today.

The sea is rough, as commonly in the west coast, but the calm of the well planned village keep attracting faithful visitors.

The house of Afonso Lopes Vieira, a good poet and a remote cousin is interesting to visit.

How many times did I stop in Tornada?

One thing I do remember:

99% of the times were to eat in Cortiço.

​(The 1% were in 1962 to fix the broken car that took me from Leiria to play basketball in Caldas da Rainha, and in 2017 to take a couple of pictures)

With so many wonders in Leiria district, who is the guy, crazy enough to recommend… Turquel?

And for a single reason – it’s the best place to see… us.

Home town is home town, and Turquel, without special attractions it’s close to everything and proud of its hospitality.

​Really, it’s not a bad idea, but, please, announce yourself in advance!

Vimeiro is a calm and welcoming village close to Turquel. Not much to see and do, but a nice population trying to produce the best fruits.

With a reasonable success.