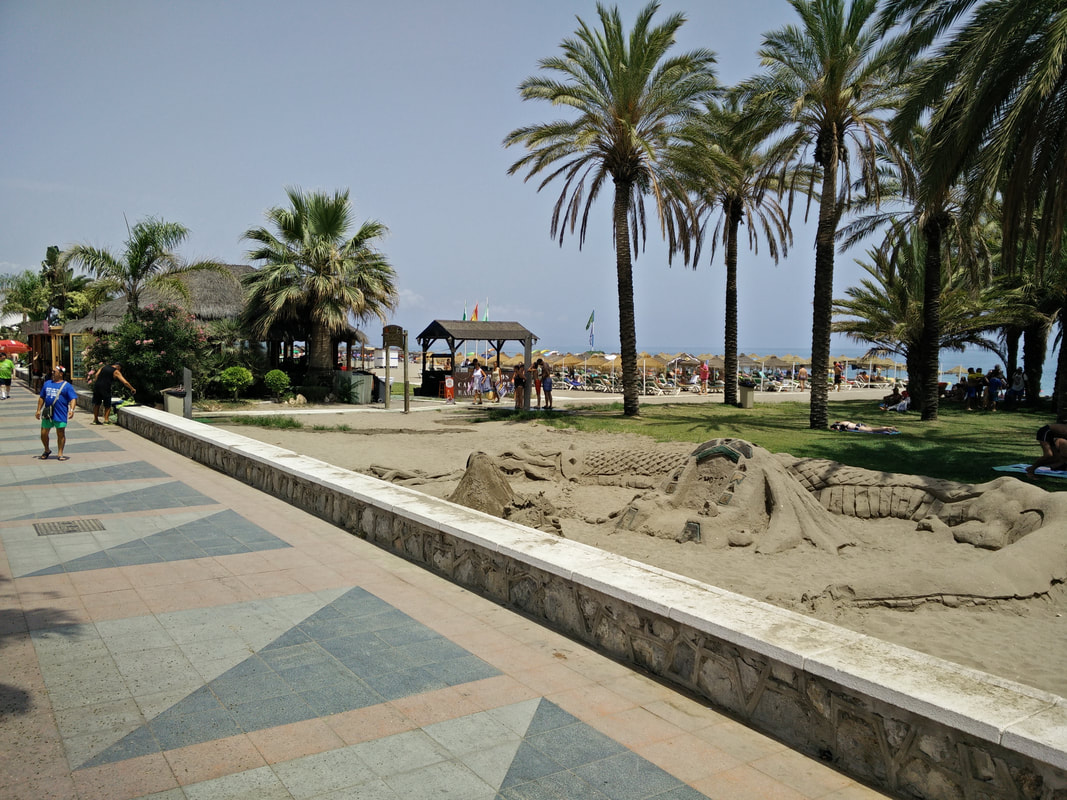 Torremolinos is one of the easiest places to describe:Beach and sea, and sea and beach.

​Near them some hotels, punctuated with shops, and several hundred reddish people moving from them to the beach and vice-versa.​

A long stripe of sand, with less people then expected, calm warm water, and the hotel just across the street.What else do I need for a relaxing week? Carihuela, Bajondillo, Playamar are just names for the different areas of the long sequence of beaches, almost until Malaga.

It’s good to forget the car!

​Even lunch can be in the beach, in one of the many stalls that line it.

The centre of Torremolinos has two good beaches – La Carihuela and Bajondillo. The only visible difference is… location, side by side. The first time we stayed in Bajondillo, and, by commodity or by the first good impression, it was my natural preference in the second visit.

It is wide, safe, and the restaurants in the sand a good place to eat.

In a world where local commerce is fading, strangled by the big malls, it was a surprise to see the many shops surviving in the central area of Torremolinos.Of course, tourism is the main reason, but it doesn’t explain everything, because most shops offer general articles, denouncing a large residential community.

​Torremolinos is,nowadays, much more than a long beach gathering pale people from north of Europe.

Torremolinos got the name from the many disappeared water mills (molinos) along the coast, and the tower than can still be seen in S. Miguel, built around 1300 by the Arabs ruling Malaga.

Despite its growth towards touristy exploitation, Torremolinos still keeps some few details from its origin.Too much commerce around, too much modern adding, but… there is still something.

​Not much, and to be honest, people don’t care – beach is everything.

The main commercial area in town is the pedestrian street of san Miguel and the same name square, dominated by the church.

​It is a Neo-classical simple structure, with the typical white walls used in Andalucia.

Once more in Torremolinos, to confirm that it has not much to see and do besides beach and nightlife.Well, not exactly – behind my hotel there’s a handsome building that was declared Historic Landmark in 1991 by the Andalusian Government.

Though showing a Moorish look, it is a pastiche built in 1925 for Antonio Navajas Ruiz imitating mudejar style.

Ok, it is not ugly, and… it is different, being used, nowadays by the local council.

The entrance is free, though a donation will be welcome.

in Torremolinos
| Tags: To see