You are in: Home » in World » in Europe » in Portugal » in Center » in Leiria District » in Leiria » Walking in Leiria 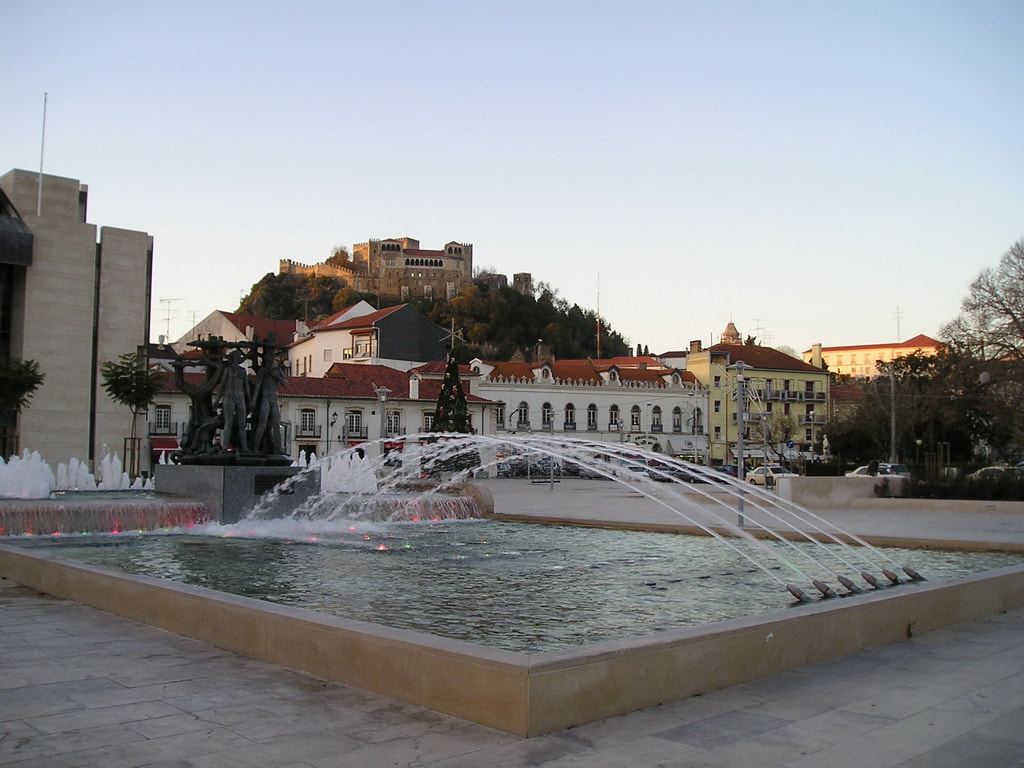 Leiria is a fast growing town, almost halfway from Lisbon to Coimbra. This makes it a good hub for traveling in the central area of Portugal. The best highlights are outside town (see my Alcobaça page for a wide list). However, Leiria has several interesting attractions, and many hotels, where the seasonal prices don’t change much.

Between the new commercial avenues and the castle, a small part of the town still keeps the traces on antiquity. Easy to stroll provide good views and ambiance

For almost 50 years I postponed the idea of climbing this hill and have a look to the sanctuary.

It happened now, but I was unlucky – it was closed.

However, I didn’t regret the effort – the Baroque stairs are simple but nice, in harmonious integration with the chapel form the 16th century.

​As expected, the views from the top are great.

This convent, two or three hundred meters apart from the centre, was built in the 16th century, still holding a Baroque facade.

The incidents of history made it become part of a military headquarters until very recently.

Now, the local authorities are preparing the recuperation of the cloisters, but the church may already be visited.

​In the back stands the church of Nª Srª da Encarnação.

Right in the centre of town, we have the “Fonte Grande” (Big Fountain) or fonte das Carrancas.

When in 1962 I went to study in Leiria, the lady that rented me the room warned me that “Who drinks the water of Fonte Grande will marry in Leiria”. I took it as a challenge, drunk the water, and… married many years later in Batalha, with Fernanda, from Turquel as me.

​I never met the kind lady again, but I’m sure that, if I did, she would insist: “See? Batalha and Turquel, belong to where? Leiria district!”.

​All those years passed the water keeps running in this Baroque fountain, and people keeps marrying… Well, not much! Shortage of water?

Today it is a cultural center, including a theater, and keeps being… a beautiful building.

At the entrance of town, from south, a small square facing the Palace of Justice and other official buildings is a nice and cool spot, with king Afonso III’s statue in the middle.

Traffic restrictions put this charming square out of each day’s life for most locals, bur this did not damage the place, by the opposite.

It’s nice to walk in this square, exploring the narrow old street, starting on it, and the remaining shops of the traditional commerce.

​Cafes and esplanades give good ambiance to the place.

In the centre of the city a small garden was my first reference when, in 1962, I moved to study in Leiria.

​That garden remains untouched, in a city where the only green area is the stripe following both sides of the river.

Though a little bit uncharacteristic (I think!), this square still keeps a few old buildings, and watches most commercial activities in town.

Banks and big commercial chains have the financial capacity to recover the old facades respecting the former architecture, and that saves the personality of the area.

Tower of the cathedral

I heard in Pula that the local church was the only one with the tower far from the main building.

I already knew Leiria, where the tower is very far from the cathedral, as you may notice in the picture.

Why does it happen?

Because the church was built in the 16th century, and in 1770 the monks decided to build a tower so that the bells could be heard as far as possible, and the steep hill of the castle was a good chance to win highness saving in the construction.

Don’t expect many surprises in your visit to the castle. It was built by D. Afonso Henriques, our first king, as a way to establish a defensive line against the Arabs, but his war with Galicia allowed the Arabs to take advantage of the withdrawal of the armies to the North, recovering Leiria twice.

In 1142, after regaining definitively Leiria, d. Afonso Henriques, ordered to strengthen the castle’s defenses and his follower, D. Sancho I, already around 1195, sent up the city walls.​

Despite the excellent work of a local architect, Ernesto Korrodi, recovering several wall and spaces in the castle, It’s now an almost empty place, allowing a good view over town.​In your way up or down notice the curiosity of the church with the tower far away from the building.

Several times remodeled, this church was about to be demolished, after being sold to the adjacent milling company.

​Recently some interesting paintings from the 15th century where displayed, which means that it will survive, being now open to the public.

Building, destroying, rebuilding along centuries leads to this situation: all the windows in S Francisco church, in the centre of the city, are different – curious, but not nice…

The old industrial activities have been successively expelled to the outskirts of the city, or even further (lately… abroad).

A few (really few) signs of that industrial area remain.

​Are them to be kept, saving the old images of the city, or are just waiting for their turn to disappear?

Leiria grew quickly to the west, occupying the plane fields along the river.

​Many traditional houses and settlements were sacrificed to the big blocks, however, a few old buildings were left behind, some of them beautiful enough to justify the question: till when?

When I lived in Leiria (50 years ago) “Maranchão” was a warning – a place not advisable in the outskirts of the city.

Now is a gardened area inside the growing town, with imaginative spaces for kids.

in Leiria
| Tags: To see