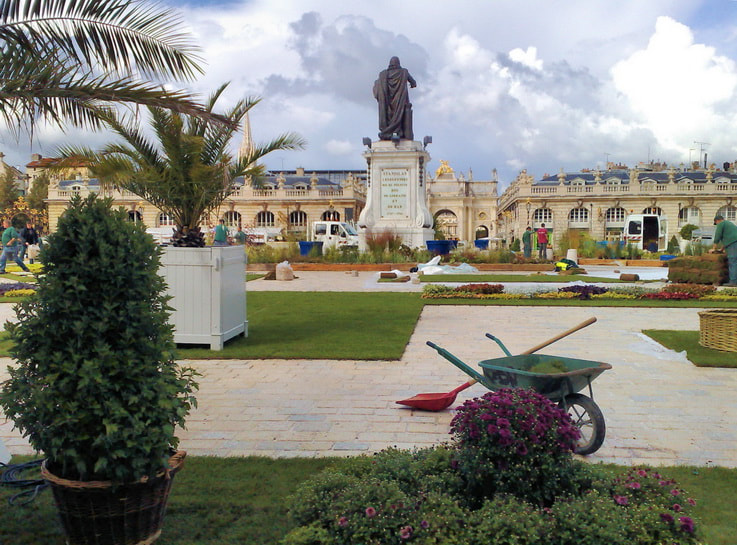 In my first visit to Nancy I was surprised by the harmony and beauty of the city.

My new digital camera brought some good photos that, in the computer… gone.
​
This second time I was more careful and the pictures are safe. But the rain only abandoned me for a few moments, and the colors were lost. That means that I need a third visit to Nancy.

Stanislas statue stands alone in the center of a large and empty square.

Sometimes, people decide to embellish the square, and an artificial garden is displayed around the statue. Still beautiful! But… come closer! Look at the garden! What do you see?

Grass, flowers and… glass! Lots of elements in glass, mixed with the natural flowers, combine perfectly, and remind us that Nancy is a must in glass art.

Confusing, is what I can say.

Looking Roman, in the decoration, I cannot link this door from the 18th century, to Stanislas.

​My fault, of course!

​In the way to/from the train station, evidencing the signs of the intense traffic that crosses it, it doesn’t make justice to what is expecting you at the end of the street.

Impossible to catch in a photo, the architectural harmony of the square and the richness of the details demand a personal observation.

​I had the privilege twice!
​

The great harmony of Stanislas square owes much to the art of Barthelémy Guibal, the creator of the two fountains celebrating Neptune and Amphitrite that close two corners of the square. Precious details.

Right beside Stanislas Square, this other square, respecting the geometry of the 18th century is… ugly!

​I mean, both extremes are beautiful with Herè’s arch connecting with Stanislas Square, and the harmonious Charles de Gaulle square at the other, but the middle is wide, empty, and with a neglected image! I think that something is missing there.

The old residence of the governors of Lorraine, was a palace from the 18th century, that seems closing the square of La Carriere, when you enter from Stanislas square.

​Closed to visit (?), when you approach, you may notice that it makes part of an independent complex, facing a large round area delimited by some arches, named De Gaulle square.

The triumphal arch with the architect’s name was built with Stanislas square, honoring Louis XV, and connects Stanislas and La Carrière squares.

​Enhancing the perfect geometry of the squares, it frames the central part of both dominant buildings in each square – City Hall, and Governor’s palace.

The most remarkable building in the old quarter is this medieval door, once a prison. I don’t know why, but the door is much more beautiful from inside than from outside, the same happening to Stanislas door.

​There’s a small lantern from the 17th century above the gate that contained a bell used to ring the hours of the day, and to call the population for public executions.

This beautiful square, near the train station, is the start (or end) of the most commercial area, and, with other motifs, it is the place to the BNP Paribas, one of the best examples of “Art Nouveau” and the school of Nancy.

In Maginot Square, surrounded by some good examples of Nancy’s art nouveau, there’s an interesting temple, identified as “protestant”.

I don’t know its story, but it’s funny to notice in its facade the niches created to hold images of the saints, left… empty, as a result of the protestant concepts (I think!).

​No doubt, we are facing an “adoption” of a catholic temple (I think, again!).

My first visit was in winter, and I skipped it.

The second one was in summer, and I went there: raining!

​A quick visit, and a promise: next time, if under the sun, I’ll appreciate the details.

Once, twice, you pass in front of this cafe, repeating the same thought: “nice building”.

Then, you read something telling you that it is one of the most distinguishable samples of the school of Nancy.

The third time, you look again, and update the thought: “Very nice building”.

​If you decide to enter, you may have a drink or a meal (expensive, I think) or just to appreciate the decoration.

The centre of town shows two different areas: the perfect geometry of Stanislas square with its surroundings, and the narrow streets of the medieval quarter.

​Close to each other, it’s easy to visit both areas in a single day.

Nancy is a case study, and a showcase of the best ever done in Art Nouveau.

​All over the city is possible to see several examples, respected by the volumes of the adjacent buildings, as a signal of modern respect for the city’s history and art.

This church from the 19th century, in a neo-gothic style, is one of the outstanding buildings of the old city.

It was undergoing hard recovering work when we were there, so we didn’t visit.

The cathedral of Nancy was… a disappointment.

In a very beautiful town, the word to describe the first impression of the cathedral was… dirt.

Only the grids, matching the style of Stanislas square gates, oppose that negative sensation.

​Inside, things are different, and Rococo details are present in the Neoclassical and Baroque styles, mixed in the construction.

A Portuguese that we met in Vannes-le-Chatel, advised us that we should try to visit this house.

We went there, but unfortunately, it was not opened to the public, demanding a previous booking (See the details in the site École de Nancy).

We only appreciated it from outside, and realized that it is mainly a symbol, because, all around it, there are many other beautiful samples of Nancy School of Art.

Integrated in a modern quarter, this baroque church of the 18th century faces a popular market, showing a different look of the city, closer to the common European cities.

Built in 1593, the church suffered several transformations, the hardest one during the revolution, when it was transformed in a warehouse for straw.

​Returning to religious use in 1801, it keeps the Baroque style from the works in the 18th century.

Close to the cathedral and far from the old town, this door seems out of context, without any connection with the missing old ramparts.

​It seems that Victor Hugo had to help Émile Galé, to save it from destruction, in the 19th century.

The canal that serves Nancy is not only a useful resource, but also a garnished spot. Boats and flowers fill and surround the water, in a discreet but nice harmony, with the bridge as a good sightseeing and photographic point.

Out of our plans, this church peeping “over the shoulder” of Majorelle Villa, attracted us by its exotic look.
We visited it and discovered that it is a new (100 years old) Roman-Byzantine church, inspired in the Sacre-Coeur in Paris.
​Large, with a nice interior with great stained glasses.​

A discreet statue near the train station, in Place of Republique, calls our attention, with a golden heart atop a pile of iron hearts, clearly reproducing the style of the iron works in Stanislas square.
It invites us to read, and doing that I found that it is a recent work of the artist Jorge Orta, created in 2002, to celebrate a convention of organ donors.
​Good work!

Saint-Leon Church​
Close to the train station two high towers called our attention.
​They belong to the Neo-gothic church of Saint-Leon, built in the 19th century, and dedicated to the bishop of Toul, who became Pope Leon IX.