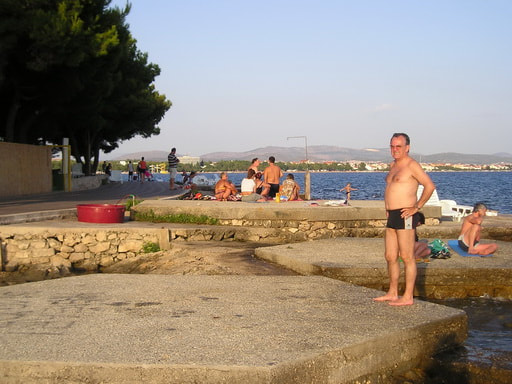 Before leaving home I checked all the hotels, and discovered that in Sibenik area we would stay in a beach hotel in Vodice.

Upon arrival (this time early enough to have a swim, we went straight to the beach… I mean: to the sea shore.

There was no beach, only some concrete formations by the water.

​No problem I dive from one of them!

But where? The water was shallow with rocks everywhere. Searching carefully I found a narrow pebble entrance that I used to enter the sea. Slowly advancing, when the water reached my waist it was time to swim.

Wrong! Two seconds later my knee hit a rock, and another, and… I had to come out.

But how? Using both hands and feet I crossed the irregular rocks back inland, ending with two cuts in left hand, one in the left feet, and the knee… and in the pride…

​Be careful! Look exactly where you are going to bath.