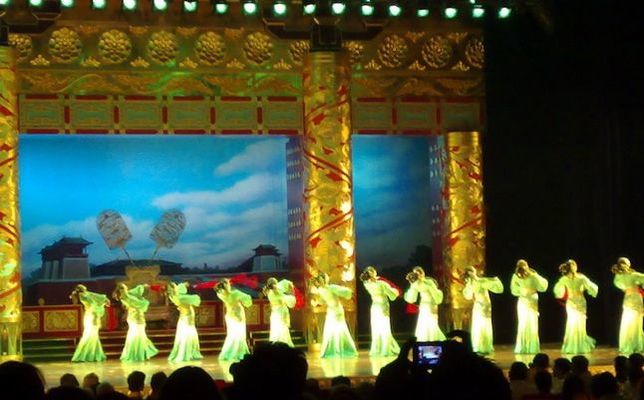 The strongest memories of Xi’an force me to say:

Put this in mind:

If you go to Xi’an and miss this superb show, I will not talk to you anymore!

The room is large and beautiful. People sit around tables, in a mix of theatre and restaurant that announces noise and movements during the show.

Imagine that, reading the list, you state: Port wine. It can’t be serious!
Being Portuguese, of course I tried to laugh about the thing, investigating what the hell they call “Port wine”. Can you imagine?
Well, it was… Port wine. Portuguese. True and honest!
A good company for a noisy and agitated show, I thought.
WRONG!

Eating drinking and talking was BEFORE the show. When it started, the silence was respectful, and we could enjoy each detail, including the nice set of musician ladies in a box, the colors, the dances, the music, the Port…

Where did this small girl learn this English, how does she know that, of course, accepting the flower that she gently offered me I had to offer her back… some generous RMB?

Is this already a sophisticated selling technique? A part of a scholar program?

“Thanks dear girl! I will offer it to my wife!”

One thing that I noticed is the rigour used by the workers in their jobs: In shops, restaurants, everywhere, the staff lines the corridors, occupying predetermined places, and standing rigid until a client needs their service.

In a long and empty store (yes, it happens also), sometimes, it looks like a handsome military parade.

​One of the 3753 shops I had to enter: Language is no Barrier

On the 14th day of August 2007, it took place in Xi’an an extraordinary assembly of the Women International Organization in China, with the following plan of work:

After 6 hours of useful discussion, it was possible to reach an agreement, approved by 64% of the votes. The final document will be written in the next weeks, and translated to “Poltuguese”.

Note: The meeting was not open to the public, so the only possible image was taken by a Portuguese paparazzo.

China bets in tourism, and the museum of Xi’an is a good sign of it.

Modern and functional building, with merchandising dominating all entrances and meeting points.

The prices… well, the prices… (Follow the example of an English member of our group that bought several things for less than half of the demanded price: show some dollar bills, and… bargain, bargain, bargain…)

One of the worst aspects of many escorted tours is shopping. We are always taken to selected (pricey) places where the guides expect to collect their commissions.

In many cases the time devoted to commission collecting equals the time to all the other planned visits.

They respected the obligation of taking us to see the artisans at work (and that is also important in tourism), but they didn’t exaggerate. The visited places were selected, we covered everything that should be seen, but never felt dragged into shops. This factory in Xi’an was a good example. Several techniques demonstrated, sympathy in all the explanations, but no one was pushed to buy whatsoever.