You are in: Home » in World » in America » in Brazil » in Bahia » in Salvador » Pelourinho and upper city 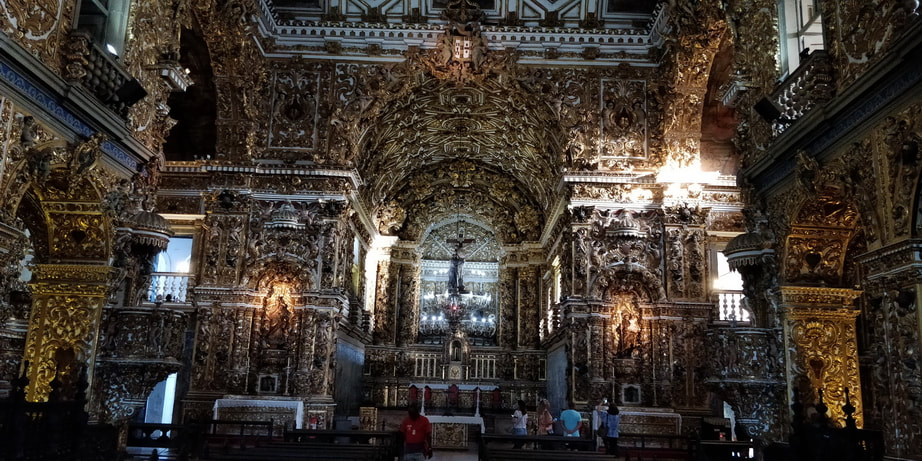 With almost 3 million inhabitants, Salvador is the third city of Brazil. Because it was the capital at the time of the great slavery flow, it remains the greatest cauldron of cultures.

​
Portuguese colonial construction is well present, and the dichotomy of the high and low city creates a diversity of image that enriches the visit.

Pelourinho is, at the same time, the name of Salvador’s most historical quarter, and of its most charismatic square.

It is in Pelourinho that, night and day, vibrates the Brazil  of the frenetic rhythms, and its craftsmen give body to creations where Africa and Portugal are well present. It is not possible to visit Salvador without a few hours in Pelourinho

The iconic image of Salvador is this wide, steep and irregular Portuguese walk, surrounded by well preserved buildings of Portuguese colonial design, in vibrant colors, with evidence to the House Museum of Jorge Amado, and the church of Our Lord of the Blacks.
Music was present everywhere, and it seems to be usual, night and day, along all the year.

The top of Largo do Pelourinho, is enclosed by a large blue house, former residence of Jorge Amado and now home to its Foundation.

There is gathered his literary collection, organized by the Nucleus of Studies and Research, a non-profit organization that ensures the management of space.

Satisfying the wishes of the writer, who wanted a living space, there is an event area, a theater Cafe with the name of his wife, Zélia Gattai, and a shop where cultural items are sold.

During the time of slavery, blacks were accepted into the temples, with some restrictions, performing their worship activities on side altars.

​Since the seventeenth century they were organized in confraternities, like whites, and the Confraternity of the Venerable Third Order of the Rosary of Our Lady, was authorized to construct its own church.

It was begun in 1704, and built with the money and labor of blacks, free and slaves, (although I doubt the blackness of the artists responsible for the altar and ceiling). We could not visit, not proving the guide’s information that there would be saints … blacks, something I’ve never seen referred to in any of the texts I’ve read.

Less promoted than Pelourinho, Largo do Cruzeiro, forms another important architectural and historical complex of Salvador, where Portuguese colonial architecture is well preserved.

Around the cross, typical of the urban participation of the Franciscans, the animation is constant

The convent of San Francisco, in Salvador, was founded in 1587. The current church began to be built in 1708, with its dazzling interior in gilded carving.
​
it is indispensable to enter, to, after walking through a cloister with curious images in tile panels that show the effort of men to combat the wear and tear of time, to be overwhelmed by the opulence of a dense and wonderful decoration in gold, the top of the Baroque.

It is common in the Baroque the presence of the gilded carving, beautifying the altars; less common is its use in a generalized, almost obsessive way, covering almost everything, only the ceiling and one or another pillar escaping this ostentatious decoration. More than enchanting, the beauty of the San Francisco church crushes the visitor

The visitable part of the old convent is a cloister without great refinements of architecture, but richly covered by tile panels, that the time goes degrading, but without erasing the histories that they count, allowing the constant work of recovery

Why two side by side churches dedicated to the same saint? I don’t know!
I only know that, next to the beautiful and rich church of San Francisco began in 1702 the construction of this new church, with a facade of much greater beauty (maybe there is the answer), and which is the only one in Brazil with high-reliefs
After successive transformations, its interior seems today to be a neo-classical carving that I would have liked to see, but, by the late hour, or for other reasons, I could not enter.

Founded in 1979 with a carnival group, the band Olodum, with its intense percussion, supported several renowned artists, until Michael Jacson projected them worldwide.

Today, Casa do Olodum, already visited by more than 500 thousand people of all origins and conditions, occupies a three-storey building: on the ground floor there is a shop selling souvenirs of the Olodum brand. On the first floor are the services, and in the second a small auditorium.

Connecting the squares of S. Francisco and Sé, this large square, whose central zone we could not see because it is under maintenance, is surrounded by a rich set of churches and palaces, which make it an inescapable point of long delay in the visit of Salvador

In one of the tops of the Terreiro de Jesus (and also topping Largo da Sé), this beautiful church, the most important church of the religious organization, is the counterpoint of the good use in Portugal of resources from Brazil to build the most impressive monuments of the 18th century, like Mafra palace or the church of S. Roque, for instance.

Made with Portuguese stone in the 17th century, this is the fourth version of church installed on the site, and features a Mannerist style.

The present temple of the Brotherhood of St. Peter of the Clergy, which emerged in Portugal in the fifteenth century and installed in Salvador in the following one, was built at the beginning of the 18th century, with royal support, which did not prevent the works from finishing only a hundred years later

It follows the artistic trends of the time, in a transition between the rococo style and the neoclassical.

Also, located in Terreiro de Jesus, the church of Venerable Order 3rd of São Domingos Gusmão had its construction begun in 1731, presenting a facade in rococo style. Its interior has neoclassical carving, that replaced the primitive baroque carving.

It underwent alterations in the 19th century, which eliminated the golden carvings from the ceiling but kept the painting “trompe l’oeil”.

It has a valuable artistic collection of Bahian artists and jacaranda furniture.

In 1808, the Prince Regent Dom João authorized the installation of higher education courses in Brazil, and created the School of Surgery of Bahia, which was named the Faculty of Medicine of Bahia in 1832.

The Faculty occupied part of the College of the Jesuits, in the Terreiro de Jesus.

After a fire that forced the construction of a new building, the architectural ensemble was classified, and now houses only the faculty secretariat.

We attended at Pelourinho to a show, in a restaurant, after a good dinner.
It was a short performance of a single hour, based in folklore (only African – I was hoping to see how they did treat the Portuguese roots, without any luck) that ended with a fabulous demonstration of capoeira. ​I already knew the art, saw several exhibitions, but nothing alike – they were really astonishing!

At the top of the square, overlooking the lower city, the Cruz Caída, a monument designed by Bahian artist Mário Cravo,  was inaugurated in 1999.

12 m high, it celebrates the disappearance of the former Church of Sé, the Primacial do Brasil, built in 1553 and demolished in 1933.

Built in 1549, the year of the founding of Salvador as the first city and capital of Brazil, this square is, historically, the most important in Brazil, since it was the seat of government for more than two centuries. Today it houses the City Hall of Salvador, the Rio Branco Palace, the access to the Lacerda Elevator and the Belvedere of the Fallen Cross, with a beautiful view of Todos os Santos Bay.

Near the square, the Holy House of Mercy of Bahia, in Salvador, was founded in 1549, the same year that the city was founded, housing the Church of Our Lady of Mercy.

The present Church was built in 1653, with successive decorative works from 1722.

Reading the history of this palace is almost like reading the history of Brazil, so connected it is to many of the most important events. This centralism cost him attacks, destruction, reconstruction, subordinated to the standards of the time, the last of which began in 1912 and gave him the beautiful current image.

​Inaugurated on December 8, 1873, on the initiative of businessman António Lacerda, it was the first elevator in the world to serve as public transportation and the highest of its kind.

It connects the square Tomé de Sousa in the historical center to the square Cayru, in the Commerce district, thus linking the so called Cidade Alta and Cidade Baixa.

We did not use it because we were warned that the views it provides do not match expectations, being best appreciated from the outside, from both plans.

in Salvador
| Tags: To see