You are in: Home » in World » in America » in Brazil » in Bahia » in Itaparica » Itaparica – Big island by Salvador 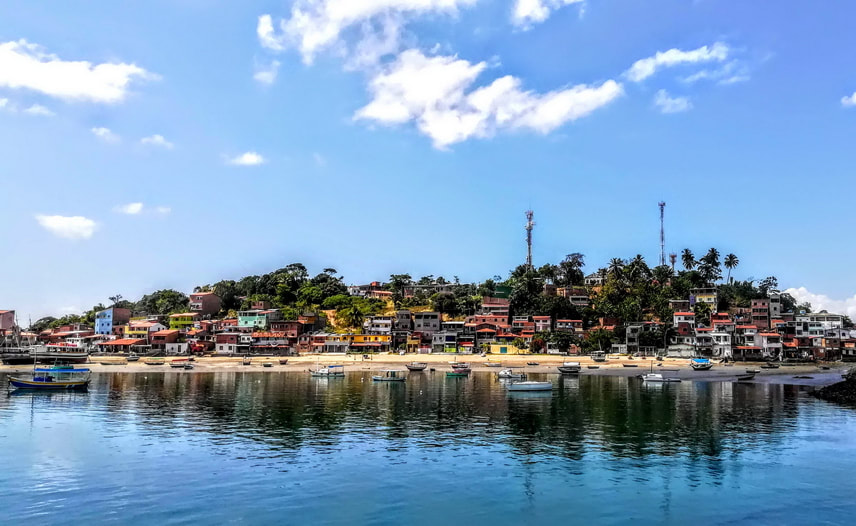 If Salvador closes the bay to the east, Itaparica, the largest island, does it to the west. Being almost obligatory point of passage for the Morro de São Paulo, we had a very general view, that gave us the idea that beaches and agriculture stand out there.

We saw only a few small beaches, but so calm, so appealing, so beautiful that they left us with the idea that, far from the hustle and bustle of big tourism, a dream vacation at Brazilian prices could be achieved here.

In the rural landscape of Itaparica, the palm tree emerges as a dominant culture, present everywhere.
I confess that to my European eyes palm and coconut trees can sometimes be confused, especially when, as it was the case, I was searching the fields for a loaded papaya – which I did not see.

Will it be a poor excuse to return to Brazil?

After an hour of boat, to cross the 14 km of sea to Itaparica, the return to the mainland on the way to the Morro de São Paulo is done discreetly, in an area where the mangroves dominate.

The landscape changes, but for a short time, and the palm tree becomes queen again.

Admirer of our Nazaré, one of the most beautiful beaches in the world, I knew that there was a Nazaré in Brazil, but I never thought to visit.
We passed there by bus, and even without other stops than those imposed by the traffic, we could see that it is a poor village, without great attributes or beauty. Sorry brothers, Nazaré is much better in Portugal.

To our surprise, the access to the boat back to Salvador was made in a different place of arrival, in a place called Vera Cruz.

​Small, but well-arranged, it left a sneaky but nice image

The sunset is in Portugal a period of long minutes, with a slow loss of light, while the night takes care of everything.

I was prepared for the most abrupt sunset in Brazil, where the change of color is very fast but passing through the same patterns of beauty.

​It was, thus, the farewell of Itaparica

in Itaparica
| Tags: To see