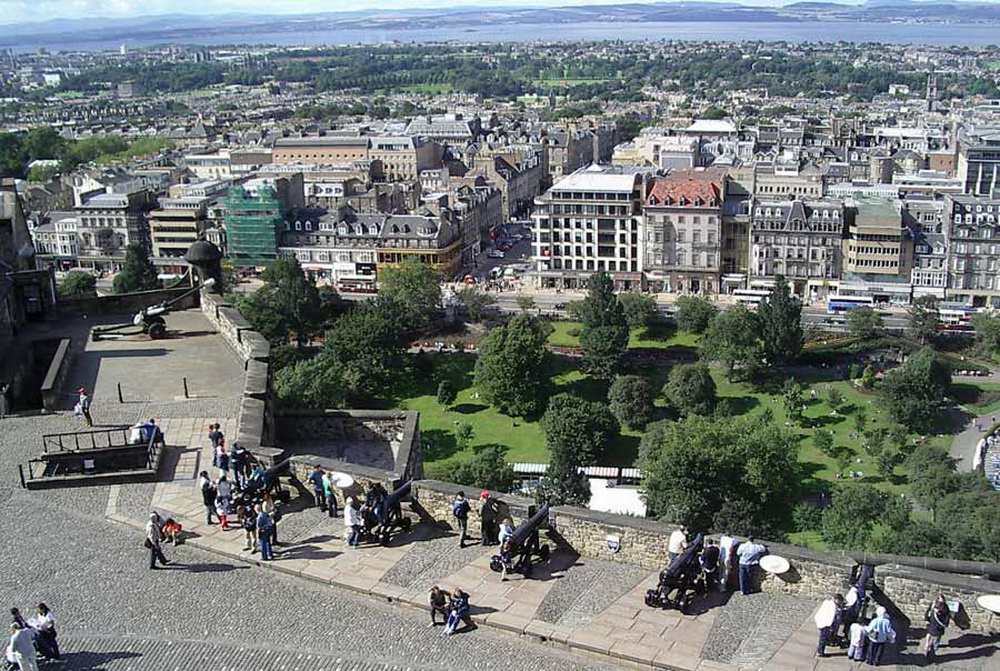 We spent only a small weekend in Edinburgh, not enough to see the town.

The two towns, we may say, since we have an historic town perched in the castle hill, and around it, and a modern town in the plane north of it. We only saw the first, with a very positive impression. The castle is magnificent, with excellent sights, and the royal mile has a very British ambience.

When I said (in my Intro notes) that I would come back, it could be for the tattoo.

​The castle impressed me a lot, but as an appreciator of folk arts and dance, I think that the tattoo that happens each year in the castle, would be “the cherry on top of the cake”. I’m not going to tell you anything about the castle, because you may find it for yourself in the link below, but, how am I go to convince Fernanda to come to Edinburgh in August for the festival?

The Royal Mile connects the castle with Holyroodhouse, and is the main touristic path in Edinburgh.

Lined with services to tourists (gift shops, bars and restaurants), here and there we see a classified building or a church, with evidence to St. Giles Cathedral. A nice walk for everyone of us, except Fernanda who was sick.

Directions: Runs downhill from the Castle to the Palace of Holyroodhouse

Once a church, this building from the 19th century in Gothic style kept its high tower. Is is used in public events, and it has a restaurant in regular operation. A couple of hours was enough to get a comment from a Scottish VTer that explained that it was his high school. In edinburgh-royalmile… I read: “This Gothic style building was built between 1842-1844 by Augustus Pugin (1812-1852) and James Gillespie Graham (1777-1858) to originally house the General Assembly of the Church of Scotland, the kirks presiding body.

​The Tolbooth Kirk’s impressive octagonal spire at 74m (240ft) is the tallest in Edinburgh.

Mercat Cross was, in the old days, the central meeting place in the market where Royal proclamations and other official announcements were read.The cross atill has parts of the original from the 14th century standing in a shaft from the 19Th.

Directions: Next to St. Giles’ Kirk

Facing St Giles cathedral in the Royal Mile, there’s a statue identified as “Duke of Buccleugh” that, for me, meant… no one. Trying to identify him, I read that he was Walter… something… Scott, and that obviously mean something for me (and everybody else in the world). reading more, I notice that… it was a coincidence – sir Walter Scott lived from 1771 to 1832, and this gentleman from 1806 to 1884. I believe that the duke’s father was a great admirer of the writer, but his son keeps being for me, just what he was when I met him in Edinburgh – someone in a statue.

The cultural reference to Scotland, Walter Scott, couldn’t pass without a significant monument in the capital.

Soon after his death, in 1832, the movement began, and in 1844 was finished this elegant tower 60 meters high.

​The statue in Cararra marble is a small white detail in the dark structure.

Next to the entrance to the castle, this centre is an attraction well conceived and planned to please adults and children. The tour is simple but pleasant, the tasting demonstrations are quick but concise, and the shop is large and varied. We had lunch in the restaurant, at a reasonable price, with a common meal (nothing to remember or complaint). Just one thing went wrong: We bought a pack of whisky candies, tasted them upon arrival in Portugal, and felt sorry for not buying a full container.

I would have appreciated a show with folk dances but there was nothing going on in town during our visit.

I tried to replace it with live music, and, also hard to find we could go to a bar not far from the hotel.

Walking in town, I noticed that the dark general look of the day was kept during the night, with a discreet illumination, and only a good surprise here and there.

Yes, I know that it was fall, in summer it may be different, but that’s what we saw…

Walking in Lauriston pl, at night, in search of a place with live music, (I found it!), we passed by a well illuminated building that we couldn’t identify.

​Only back home I discovered that it is Heriots school, using a palace that a century ago was a hospital.

We were short in time, and only saw the buses when most of it was gone. I don’t know if would have been useful or not in our case, but it uses to be a perfect solution for those who can only allow themselves a glimpse of a city.

It’s easy and pleasant to meet someone, here and there, playing the traditional pipe in Edinburgh. One coin is appreciated and fair.

Back to Edinburgh page
in Edinburgh
| Tags: Memories, To see, Transports