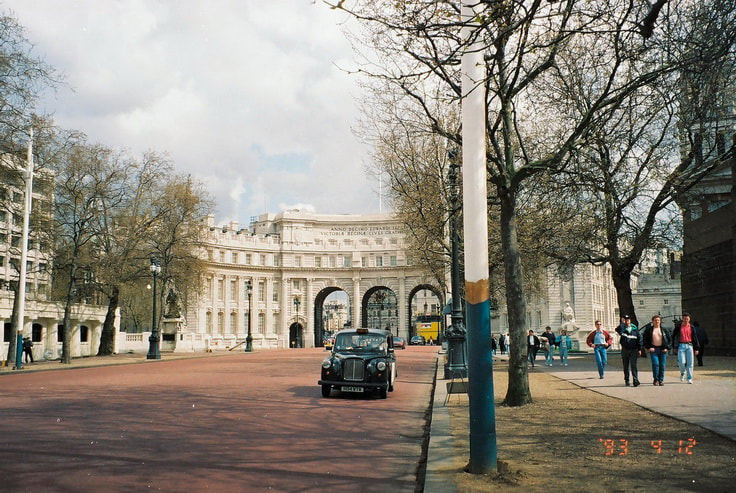 “London is the kindliest town in the world. If you doubt it try this: put yourself in a corner with a map in your hand and looking lost, and someone will come at once to help you.”

I read this pearl in a touristic prospect in Barcelona, and didn’t believe, but remembered it years later, when I couldn’t find the Ashley Gardens in London, and made a test.

It worked, do you believe?​

Are the English really so predictable? How can you explain that hours later I almost was arrested by standing upon a wall close to Buckingham Palace, watching the changing of the guard, amidst at least other 20 people? Am I that ugly?
Well, London is always captivating, and I went back years later and will again each time I can.

The heart of London, Trafalgar square is a wide and harmonious square, where everybody meets, to make a short break, and prepare the next stage, under Nelson’s supervision from the top of his column. To Piccadilly or from Piccadilly?

In the old days, this building should impress by its size and strength. Nowadays, surrounded by the high monsters of modernity, it is only an historic curiosity. It surely deserves a visit, and inside, you will feel back that sensation of power and domination.

​The only thing that may become boring is the long visit to the huge collection of weapons, most of them so similar that you feel like being in a armory instead of a museum. Maybe that’s the idea…

One of the attractions in the Tower of London are the Yeoman Warders, usually called Beefeaters.

​Once a guardian force to take care of prisoners and guard the crown jewels, they are, today, a sort of guide or public relations, always available to a smile or the mandatory picture.

Watching the children walking in the park, I remembered an impressive image of my first visit to London: In Hide Park, a small aperture in the clouds provided a tiny spot of sun in the lawn. There, more than 30 deck chairs, were occupied by British (I presume), enjoying the sun. As the clouds slowly moved, the chairs hit by the shade were moved to the other bottom, assuring some more minutes of sun. Thus, the pack was slowly advancing along the park, always in the sun, and always with someone walking to move his chair. Nothing special, you say. But that was the first time I deeply appreciated the Portuguese sun.

​Hide park is a world, where several experiences may be lived, from the calm of people relaxing under the furtive sun, to the free assemblies in its corner.

Tower Bridge is one of London’s best known landmarks for more than 100 years.

The middle of the bridge can be raised to allow the boats to pass, what nowadays happens less than once a day. From the top there is a great view on the centre of London, with a display with the story of the bridge, and the original mechanism used to raise the bridge, however, the entrance is not cheap. (Actually closed… it seems)

Do you really expect that I write something about the parliament Houses and Big Ben? What for?

​Even if you have never been there you risk to know more than me, such is the popularity of them. At least from outside, the only sight that I had.

​Changing of the guards

It is a “must see” in London the changing of the guards, in the royal palace.

​Many hundred people compress against the grids, to see a show that, in the palace’s yard, has not much to see. Part of the changing, daily at 11.00, the other each two days, at 11.30, the show is mainly in the surrounding avenues, with the parade of troops and bands to and from the ceremony.

Let me tell you a story that defines English (and ashamed me):​

I was in Whitehall and saw a band, with the big black hat, coming down the avenue. I stepped forward into the avenue and inclined myself framing the scene, waiting for the band to approach enough to fill the picture.

​​When I finished I looked back, and shame on me: three lines of cars were stopped behind me, the crazy guy who forgot that in England traffic is by the left hand. All London waiting for my picture, without honking or any other sign of impatience.

I visited the National Art Gallery in 1971. After that, with the kids, some other museums seem preferable. However, I remember the quality of the collection, and specially, my friend João with an open mouth in front of a Giotto’s painting, from the 14th century.

That’s one of the museums that children adored. They didn’t notice the imposing building (I did) but the exhibition was extremely attractive. The trend were dinosaurs, well documented there. After the disappointment of dinosaur’s parade in Disney World, the comfort of the authenticity.

Why did Ali Baba come to my mind?

I may be unfair, but I felt really uncomfortable in Victoria and Albert Museum. I felt that the display had too many pieces, somehow mixed, resembling more a receptor’s warehouse than the proud exhibition of respected pieces of art. It was a quick visit, but that was the strongest sensation.

in London
| Tags: To see