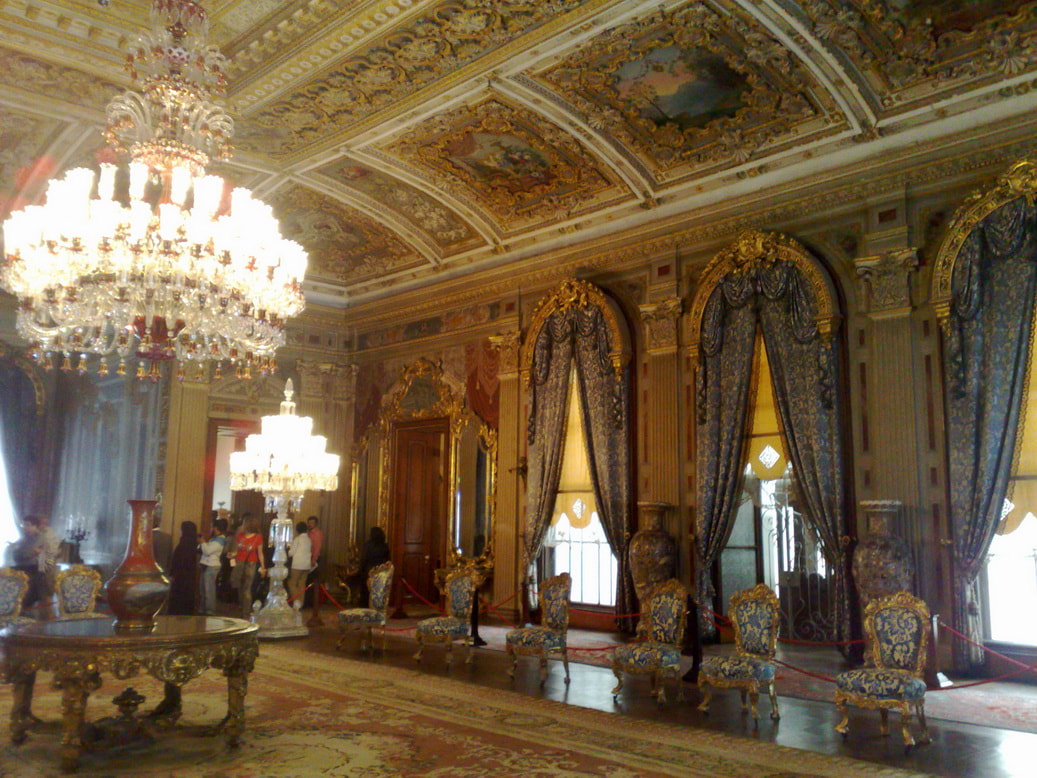 It was a small disappointment, the visit of harem.

In Topkapi, this is the most harmonious and beautiful area, and I was expecting the same – no way.

The area visited by the sultan still keeps some beauty and richness, but the remaining area is poor and somewhat neglected, compared with the male part of the palace.

​Sultan’s mother has a distinctive treatment but far from the official opulence. I think that the visit should be done in opposite order, starting by the harem and reserving the official area to the end.

I had to visit the Asian side, and, in a quick look, tried to find any difference – I didn’t.

As a matter of fact that continental separation is only a convention, without any differences in landscape, people or construction.

The bridges that connect them have that special meaning – only a few meters of water separating two parts of the same country, the same people, the same city.

​Only one difference – history and tourism are mainly in European side.

I know Turkish folklore, and understand the large diversity of the people, creating great differences in music and costumes from place to place.

We had a great dinner with folk dancing in Ankara, but nothing in Istanbul.

In Topkapi I saw a couple of nice girls, in costume, but the barrier of the language didn’t allow me to understand if they were going to dance or coming from dancing.

​I had their picture… and that was all.

​Poetry in a strange language

This is hardly a place for foreigners. We were there searching for a alcohol allowed restaurant, and found ourselves in a very dark tiny bar, eating by candlelight, with three people talking in the corner.

When we heard a light applause we finally discovered that it was not exactly a common conversation: a lady was reading a Turkish text (poetry?) and the two men were listening, applauding and commenting it in the end.

Well, it could be interesting, but not for us, the “barbarians” understanding only Portuguese, English, French, Spanish, Italian and Norwegian.

However, the meal and the beer were reasonable, the wine awful, the prices acceptable, and eating in the dark made us laugh.

I know the big importance of Ataturk in modern Turkey.

It is not surprise his presence everywhere, in official places and political instruments, but I noticed that popular respect follows the same high level of reverence.

​From taxis to touristy gadgets he is always present.

In my second visit to Istanbul I had the opportunity to visit Volkswagen’s “local empire”.

Big organization, big buildings, big commercial image, but the top of it was a relic – a Beetle car covered with stones.

Precious? Not so precious?

I don’t know, but the car was there, and if you decide to buy it I hope that you’ll invite me, to see how do the stones behave facing the wind.

Istanbul is a very big city, that keeps growing all the time.

​Though the central area seems somewhat controlled (thanks God, thus preserving some authenticity), there are a few “islands” where skyscrapers grow side by side, and construction continues, larger and higher.

Near the blue mosque, we decided to walk a little along some secondary streets, and it was a pleasant surprise – cleanliness, traditional construction, good taste.

Well, we were still in a touristy area, but… it was good!

A big maze, it’s the ideal place for shopping in Istanbul.

The shopping lovers have everything there, their companion may enjoy the site. Much more organized than the Islamic souks, the place keeps the oriental touch, and bargaining is the general sport.

Don’t miss it, but have a look at street markets too

Some typical yards inside walls are used to display art and crafts, using the beauty of the scenery to promote the works.

These cozy places bet in quality and design, far from the “chinawork” that fills the touristy stalls everywhere.

The prices are, as expected, higher than in the banal markets.

​Maybe the most beautiful yard that we visited was entered by accident, when searching for the closed Roxelane baths.

Taksim is the centre of modern and nightly life in Istanbul, and, to be honest, an ugly square.

Furthermore, it is bigger than it seems, very irregular, with a garden squeezed in the middle, and it may become tricky at night.

It happened to me, coming back to the hotel by the “wrong” side, finding a close way, with two alternatives: crossing the empty dark garden, or turn all the way back.

​This was my decision, and then I noticed how tired I was…

Back to Istanbul page
in Istanbul
| Tags: Memories