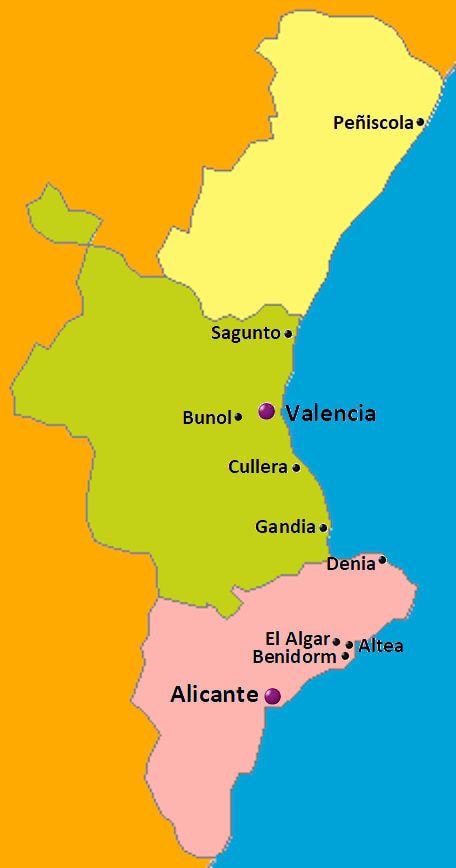 Benidorm is one of the favorite Spanish beaches amidst the Portuguese, and I was no exception, having been there several times.

The first one was just driving along the coast, passing also in Elche, Alicante and Cullera, before skipping Valencia to return to the coastal road that passes near Sagunto and Castellon, to another stop in Peñiscola.

Several years later I returned with the kids, driving southbound, after a bad experience in Valencia (my car was assaulted), stopping in Gandia, Denia and Peñon de Ifach, before a reaching Altea, where we stayed a week.

The boys enjoyed Benidorm, and we had to return for a week a few years later.

Time enough to travel around, seeing Alfaz de Pi, Fuentes del  Algar (where, recently, I returned with my larger family – grandsons), and Guadalest.

The kids grew (and went alone to the adventure of Bunol festivities), and added a third generation to the touristy team.

It was the three generations that spent together in 2017 more ten days in Benidorm.

​Well, I think that it’s enough, but… who knows?

A small town with character, very… very quiet (as I needed) close to Benidorm, and more.

​We walked a little at sea level, with the idea that the steep hill, topped by the cathedral would be nice, but, with two small kids, we preferred to stay by the sea, or to travel around by car, so, we saw not much in Altea

Yes, I know that Benidorm is a confusion, exactly the opposed of what urban people seeks – a calm, empty beach under the palm trees.

We live in the country, and for us, changing is exactly the opposite of those needs of townspeople.

Benidorm was the choice in a few occasions, always meeting expectations.