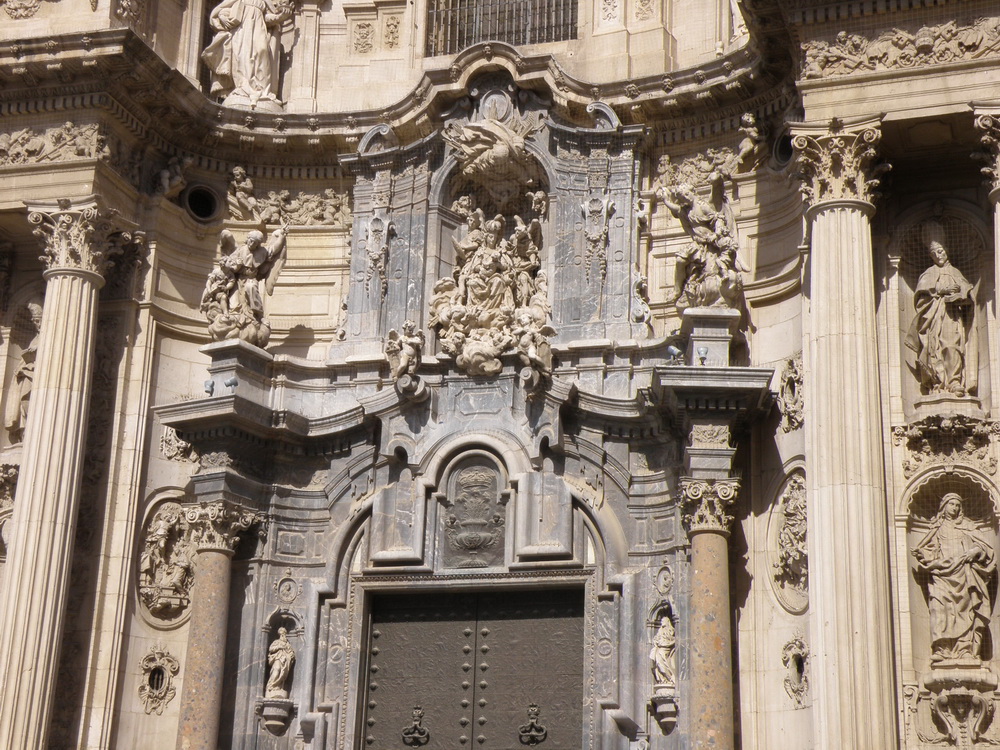 For several times I passed in Murcia, blaming the many villages that surrounded it, forcing a slow traffic that delayed the long trips that I was doing.

This year I spent a week in La Manga del Mar Menor, that gave me time enough to go and have a look.

I enjoyed the city, specially its splendorous cathedral​

Its facade and bell tower are absolutely impressive.

​Its richness is due to the several centuries that lasted its construction – started in 1394 it was only finished in 1791, with the successive styles joining the construction in perfect harmony.

In Cardenal Belluga square, next to the cathedral stands the Episcopal Palace.

It is a must in the architecture of the 18th century in Murcia.

Several expert from other cathedrals collaborated in its construction.

It is made up of two joined buildings, the so called Martillo (hammer) and the main body, clearly influenced by Italian Mannerism.

​The balcony doors of the facade reproduce the architectural solutions of Michelangelo for the Farnese Palace, in Rome.

If we forget the cathedral, the most beautiful place in Murcia is this square.

With a very rich history, it is surrounded by wonderful constructions, from the church with the same name, to Almodovar palace, Banco Central, casa Cerdà and more.

​Decorating the square a small monument celebrates the human rights.

I was curious about this building from the 19th century but… couldn’t see it.

It was covered to maintenance, and the only free angles were covered by trees.

Bad luck. However, i read that it was several times rebuilt, recovering serious damages from fire in the 19th century.

​The last one was in 1985, introducing new resources that, behind the old facade allow a very intense activity in modern cultural life of town.

I couldn’t see Romea theater, under maintenance but could appreciate the nice square that faces it, with a few esplanades and restaurants whose density didn’t spoil the look of the square, with the palace of Gonzalez Campuzano now used as a tourist office.

Who was Fernandez Caballero? An old man whose statue in Romea place forced me to read, and discover that he was a local musician born in 1835, returning home in 1903 after a long and important work in Zarzuela music that he took around the world.

​To be honest, I must confess that I like Zarzuela, but couldn’t identify any of his works. I will pay more attention in the future.

The San Juan de Dios church, from the 18th century. is also today a very interesting museum, with Baroque carving and paintings.

Close to the cathedral, and next door to the Church of San Juan de Dios, the former San Fulgencio Seminary, built in the 18th century, was recently restored and now is the home of a secondary school.

The main facade gives public access to the cloisters.

Dating originally from the 17th century, the church was rebuilt in the 19th and not much remains from the original.

​In the civil war most of its rich contents was stolen and only part of them could have been recovered and are displayed again.

Giving name to one of the most beautiful squares in Murcia, Sainte Catalina church is one of the oldest in town.

It was built in the 16th century, from a Muslim mosque, in Mudejar, a compromise between Muslim and occidental architecture.

​Some other nice elements compose this historic square, with evidence to Ramon Gaya museum and La Union and Fenix monument.

​Several artists worked in it, but the most uncommon detail is the selling of freshly- baked cakes by the Sisters of the Enclosed Order, through a revolving hatch, that I couldn’t confirm locally.

As many other in Spain and Portugal, this Catholic church replaced a Muslim mosque in the 13th century, however, the actual building was started in the 17th and finished in the 18th centuries.

​That’s, maybe, the reason why it mixes Renaissance details with Baroque, with a rich interior.

One of the most important monuments in Murcia is this monastery, coming from the 14th century.

Built in location of a former Muslim alcazar, the remains were preserved, adding Muslim details to a Gothic cloister and a Baroque church.

​Nowadays it houses also the museum of Santa Clara.

This church built in the transition from the 15th to the 16th centuries was demystified, and it is now used for exhibitions of art, mainly Baroque altarpieces and images, its visit being conditioned by that use.

In Baroque style, this church coming from Muslim times, was deeply transformed after 1736, when the new style was adopted.

​ The facade is one of the jewels of Baroque for its singular conception.

It’s free to enter, but it demands a little bit of something that I didn’t have – time.

​It has one of the best collections of pré-history in Spain.

The most interesting streets in Murcia are calle de Traperia and calle de Plateria, at its side.

​Starting (ending for me) in the cathedral, they define a pedestrian area with lots of monuments and commerce, fairly representing the centre of town.

The Royal Casino in Murcia is a precious building in Arab style, carefully recovered in 2009.

​It is something not to be missed, even you decide not to risk a euro in the slot machines as I did. I surely recommend you to read the detailed information following the link indicated below.

As usual in Baroque, a discreet exterior hides a rich interior in many monuments.

​That’s the case of San Miguel, a church built by the end of the 17th century, a church that you must enter.

Lining Segura river, Glorieta, a rectangular and flourished square, with cardinal Belluga statue, is backed by the beautiful building of City Hall, with the palace of the archbishop closing one of the tops.

​With a Neoclassic facade, the palace was built in 1848.

The old Arab Alcazaba was a palace by the river, strategically located out of the centre to easy the escape, if needed.

In 1266 it was conquered by the Christians, but the palace remained until 1500.

After that, large transformation gave place to a large rectangular square, limited by City Hall and the Archbishop’s palace.

​Two statues and lots of flowers give the place a nice and colorful look.

A grain silo from the 15th century was later used for other purposes suffering several transformations during the 17th century.

​After being a court, it is now used as the city archives.

Close to the river, a market built in the beginning of last century keeps being used, with important role in local distribution.

​Vegetables, fish and meat are regularly sold, in a place where some works in 1975 to improve the inner conditions didn’t harm its Modernist look

Flanking Verónicas market a delimited place is signposted as “a Punic wall”.

​Well, there’s a very old wall with not much to see or to understand.

​Excavation seems to go on, so maybe… one day…

Flanked by the Malecon, a 15 Km long walkway three meters above the ground to protect the city from flooding, the river is a landmark, with several natural and artificial interesting details – at least in the central part of it.

Back to Murcia page
in Murcia
| Tags: To see