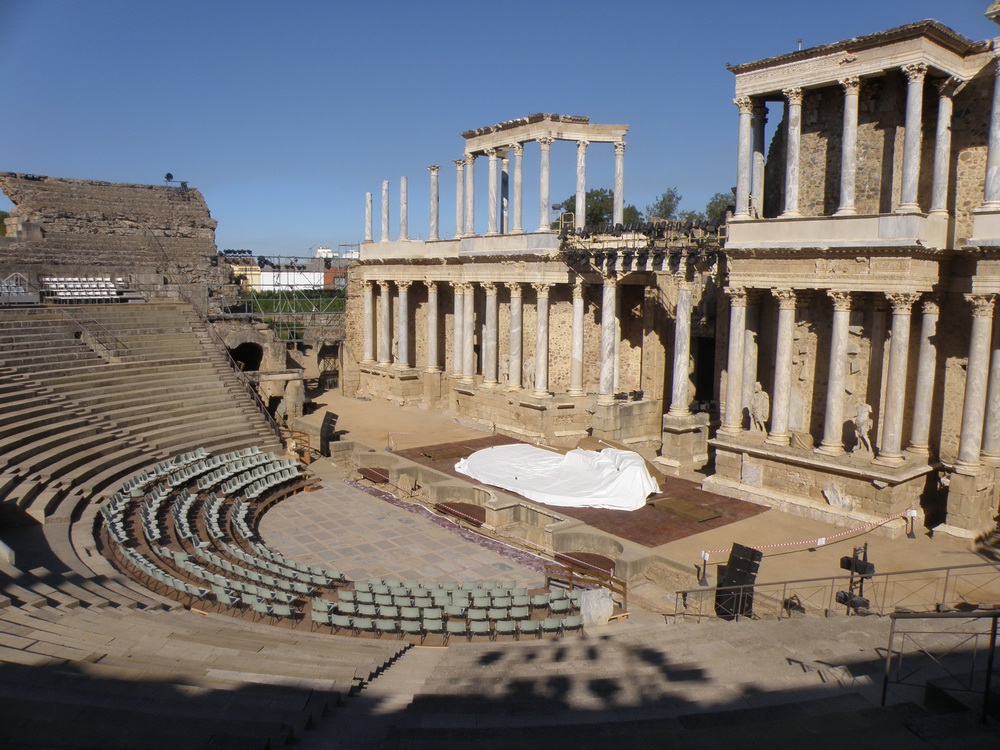 For several reasons, I always skipped Merida in my trips to Spain. It was too close to be a final objective, and a little out of all ways to the other main targets.

This year, my way to Torremolinos allowed three days, and one of them was finally dedicated to Merida.

​Not a deep view, but a general overview of a small and nice city where the Roman Empire hides under each rock, or behind every tree.

I will start now to describe my day, with natural evidence to the magnificent Roman theater.

The top attraction in Mérida is the Roman Theater, a construction started by the consul Vipsanius Agrippa in the years 16 to 15 BC, and renovated at the end of the 1st century or early 2nd century AD probably by Trajan.

​In the 4th century Constantine I introduced new decorative-architectural elements and a walkway around the monument.

With only a small detail called “the seven chairs” visible atop the earth that covered it for centuries of abandon, the excavations started in 1910, and the reconstruction in 1960.​

However, since 1933 that the ruins are used to Merida’s Classical Theater Festival.

​It surely deserves the visit, and if you may get the company of a 3 years old child as I did, you will have the surprise to find what the eyes of a child can find in a adult’s place. So funny!

Just beside the theater, and visit able together with it, there’s a larger amphitheater, not so well recovered.

It seems to have been built in the year 8 BC, to be used by gladiators and wild animals.

The signs of digging and reconstruction are well visible in all the complex.

​House of the amphitheater

When you travel short in time, with a kid and a shopaholic, something as to be skipped. For instance, this ruins.

I know that most tourists do the same for different reasons – they are close to the main ruins (and, I think, sharing the same ticket) but with a separated entrance. I knew that, but… no way, and I’m sure I would have appreciate the visit: the houses seem to be well recovered, displaying interesting mosaics.

​OK. It is in the list for the second visit. Besides, excavations seem to continue…

In the central area of Roman Emerita Augusta was built a temple with granite from local quarries and coated with stucco, surrounded by columns on all sides.

At the end of the fifteenth century, a Knight of the order of Santiago, Don Alonso Mexía, , built a palace on the ruins of the Roman temple. Part of the remains of the main façade of the Renaissance palace are still visible.

In 1972 the building was expropriated with the intention of recovering the ancient Roman temple but, subsequently, it was decided to keep part of the Palace by its unquestionable patrimonial value. Those options, facilitated excellent state of conservation that the temple actually shows.

With lots of Roman remains popping up everywhere, Mérida created the Archaeological Museum in 1838, that was replaced by the National Museum of Roman Art in 1986.

I had no time to enter, so the only image that I caught is that I found it one of the bigger and uglier houses in town. However, I’m fair enough to accept that my taste is not universal, and that the really important is the collection that… I didn’t see.

It seems to be a lively place, as a centre for diffusion of Roman culture, with conferences, colloquia, exhibitions, and many other national and international events..Address: C/ José Ramón Mélida

Scattered along town several groups of ruins enhance the rich history of the city almost two thousand years ago.

​This complex, in the middle of the commercial area, dominated by the temple of Diana, also include a portico, the temple of Mars, and baths.

“It’s just to have a look”, the common argument that usually forces me to stop by a shop, came once more, when, exiting Mérida, a Chinese shop appeared in a roundabout, close to the highway.

I must confess that, this time, it didn’t bother me much, because, in the roundabout, the general Marco Agripa was standing on his horse.

Waiting for the legions to come?

He didn’t tell, however, I found out that the statue was created in 2007, to celebrate the politician that, charged by the emperor Octavius to build the theater, decided to give to Emerita Augusta the image of Rome.

I was in Mérida with a 3 years old child, so, the small train was my first plan to visit the city. I took it so seriously that, before leaving, I checked the films made by users and posted in Youtube. What a deception! Everything that I could see in those amateur films were ugly streets with a distant look of the aqueduct. I lost the enthusiasm, and the train became just a detail that we could add to the program, if the visit was difficult, if the child got tired, if we had time to spend, if…

​We saw it passing by, but walking was better. However, if… you have it there.

Memories of Merida – A small city

Back to Mérida page
in Merida(Sp)
| Tags: Memories, To see, Transports