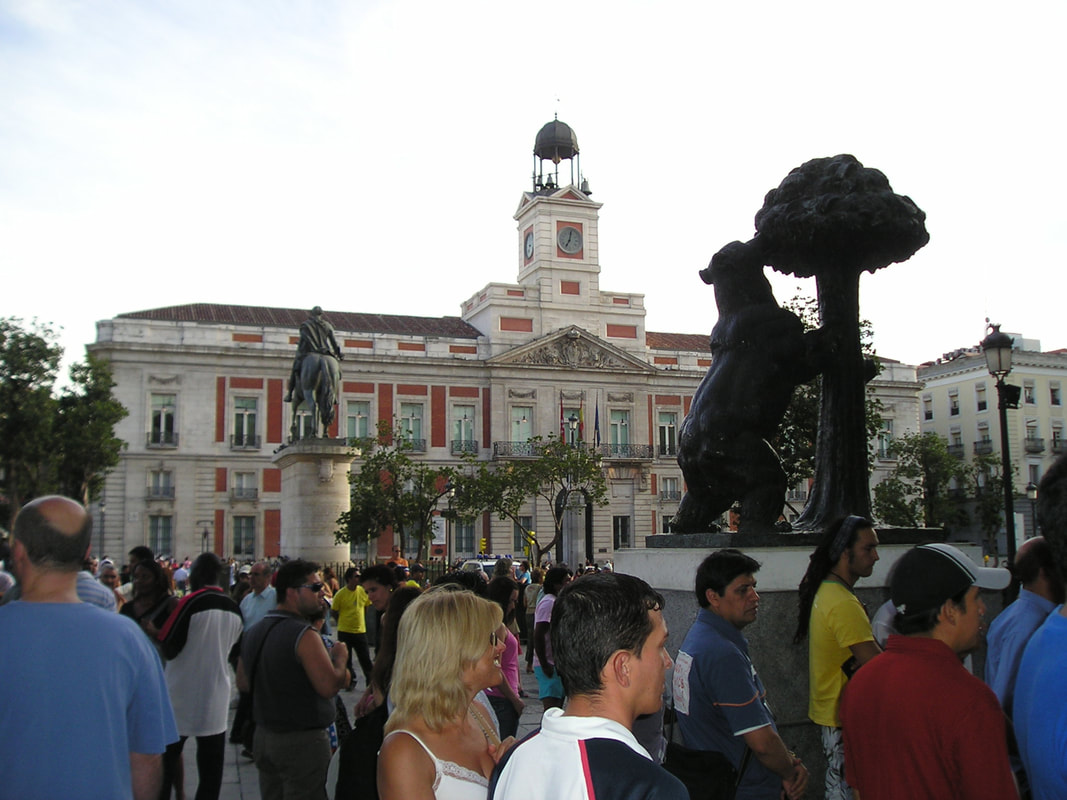 Madrid no me mata

Yes, Madrid is a beautiful town – but, even in Spain, there are some other that touch me deeper.

Yes, it is a lively town. But where in Spain do you find a town that sleeps at night ?

Yes, History shines in the city, but history is loved and preserved even in the small villages of Spain.

One of the most beautiful places in Madrid this square is dominated by the central fountain, created in 1782 and dedicated to goddess Cibeles.

​Around it Cibeles palace, Bank of Spain, Buenavista palace and Linares palace compose the “living room” of real Madrid supporters, and the main meeting point for tourists.

Built in 1778 by king Carlos III as one of the entrances in town, this monumental door was designed by Sabatini.

In 2001 Madrid was the World Book Capital, and that was the pretext to embellish the square, adding the gardens and lights that still may be seen.

A strange construction near the royal palace, is an Egyptian temple, rebuilt in 1972.

It was originally in Aswan, and would be lost due to the dam’s construction. UNESCO made an international call to save it (and some other).

To thank Spain for the cooperation saving Abu Simbel, Egypt offered this temple to Spain in 1968.

D Quixote de la Mancha is the central figure of this central square, and the only detail that allows me to link it to Spain.

​The architecture is somewhat closer to central Europe, and the place is too quiet and “cold” to Spain.

One of the most beautiful parks of Madrid is centrally located, close to Alcallá and Atocha station. In the long walkings across Madrid, this is a really good place to rest a while and…breath.

Officially the royal residence the palace is only used for state ceremonies, since the royal family lives in Zarzuela, a palace in the outskirts of town.

We didn’t visit it, but could appreciate one the gardens, Sabatini gardens, whose name comes from the architect that designed the stable demolished to build the gardens in 1930.

Church of Santa Teresa and José

Portuguese are soccer lovers, jealous of the better games played in Spain.

It’s common, for those who may, to travel to Spain only to see a game (or a bullfight). Madrid and Barcelona are the top destinations, with Real Madrid and Atlético de Madrid dividing the capital.

​In the central quarter of Arganzuela, this stadium belongs to Atlético, and it was the first one to have individual sits to all the people allowed – 70000.

Madrid is big, but its visit shouldn’t be completed if you miss some of the nearby attractions that make part of Madrid’s community.

​Escorial (a must see) and Aranjuez are quiet places for a break in town’s hustle.

A way for a different look of Madrid is the cable car that links Paseo del Pintor Rosales to Casa de Campo, passing over Rosaleda, and Manzanares river.

It offers a different perspective of the city and a few monuments, but, once arrived in Casa de Campo, unless you want to breath for a while in the woods, or visit the amusement park, the solution is… to return.

About one hour driving north of Madrid a high cross in the mountains of Guadarrama signs the location of this fascist monument to the death of civil war, in a place called Valle de los Caidos.

​Why not? We must keep good and bad memories. Go and have a look, and don’t forget, ten kilometers distant Escorial is another kind of religious monument.

Back to Madrid page
in Madrid
| Tags: To see