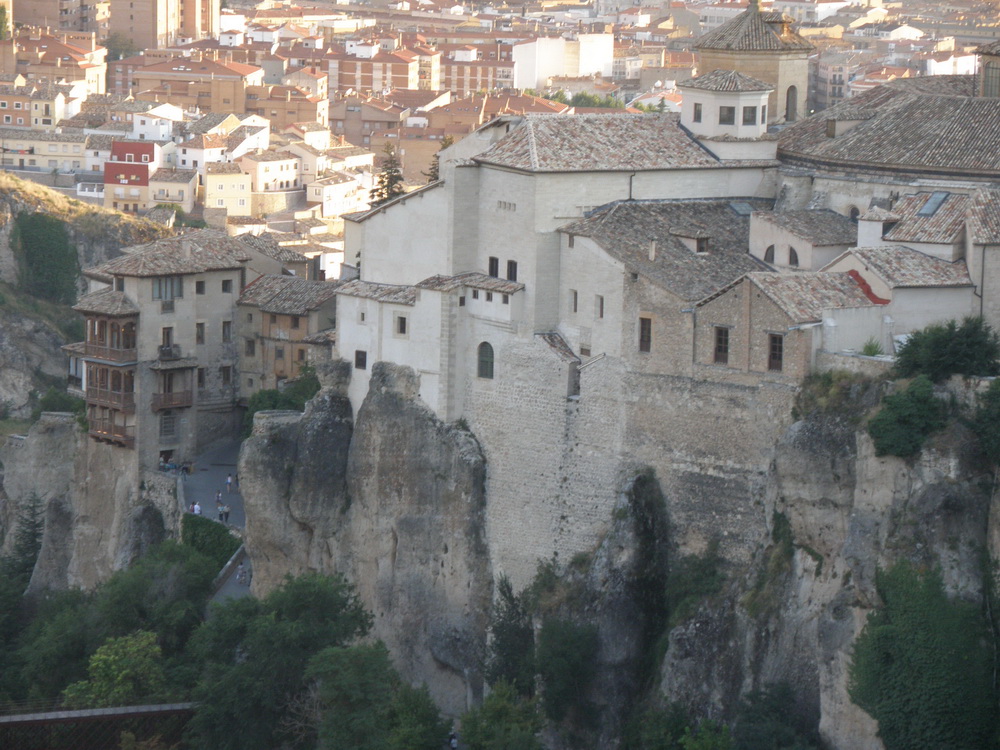 I wished to visit Cuenca.

Fernanda wanted to spend a week in a southern beach of Spain.

​What’s the best way from Portugal to the south of Spain?

Through Cuenca… of course.

The fact is that even Fernanda enjoyed very much this visit and didn’t complaint for the few more kilometers. Cuenca was a good capital to European culture in 2016.​

UNESCO heritage since 1996, Cuenca has in this square at the entrance of the historic site, its dominant point.

​City hall, a baroque building with three arches giving access to the square, and the cathedral of “Nuestra Señora de Gracia”, from the 12th century, are the most remarkable buildings in this harmonious square.

Generally one of the remarkable buildings in Spanish cities, this official palace is not an exception.

​Closing the main medieval square – Plaza Mayor, its arches filter the access to the old quarter around the castle, and gave to the square an ambiance of intimacy and tradition.

Alfonso VII of Castilla conquered Cuenca from the moors and the mosque was, as usually, transformed in a Christian church. Influenced by the Normans (the Spanish queen, Leonor Plantagenet, was daughter of the English king) it was built in first French Gothic, but the facade was later replaced in neo-Gothic, trying to reproduce the original, eliminating some baroque transformations.

​It’s forbidden to take pictures inside.

The castle of Cuenca is a city inside the city.

​There’s not much to see in the remains of the original Arab fortress, but the whole is nice and allows splendid views over the city, the Huecar valley, and the hanging houses.

A convent from the 16th century, located at the castle’s entrance, was occupied since 1602 by the “Carmelitas descalzas”.

​Nowadays it is used by the Internacional University “Menendez Pelayo” and the museum of the foundation António Perez.

Strolling along S. Pedro Street is a very good experience – the old city is around you, with typical houses and gardens, with many monuments nearby.

​There’s no way to miss it, if you walk from Plaza Mayor to the castle.

Located a little bit out of town, in a steep hill facing the hanging houses, this monastery from the 16th century merges a Gothic structure with renaissance decoration.

​Only the church and cloister show the initial image, everything else is later adding.

The most famous bridge in Cuenca was built in 1902 in iron and wood.

It is 100 meters long and 40 meters above the river level, coming from its deep bottom.

​Maybe the high reputation of the new one comes from the excellent views that it allows.

The image of Cuenca is given by the “casas colgadas”, a rank of old houses atop the edge of the canyon carved by Huecar river.

Nowadays they are, obviously tourist attraction, housing a museum and a restaurant.

​They may be seen from several angles, the best being St. Pablo bridge or the castle, where we didn’t go, but… wait for a new tip – Tito will go.

In a previous tip I wrote that the best angle to see the hanging houses was from the bridge.

Tito went there and brought a couple of new photos that confirm the common idea.

​We missed that angle, but it’s about time for the youngsters to help the old guys, isn’t it?

There’s no reference about this old tower destroyed in the 19th century during the battle against Napoleon’s soldiers and rebuilt in 1926.

​It has now a Mudejar style (maybe because of its Moorish origins) and suffered a final adding in 1968 to get a fortress look.

Located outside the historic centre, this church from the 16th century, also known as San Anton church, is owned by the city council.

​It has two different facades, one of the Plateresque, and Rococo decorations inside.

In the low part of the city, the river is cool spot, nice for resting or water sports.

There’s an artificial beach, but I think that bathing is not the main use of the river.

​The landscape is nice, with dramatic cliffs, some of them with hanging houses behind the vegetation.

Far from the sea, Cuenca used Jucar river to create an artificial beach.

The space is small, but a clever solution was used to collect clothes and belongings at the entrance and storing them out of the beach.

​It seems to work!

More than 20 Km out of town a very well promoted park may be… a nice stroll or a touristy trap.

I read that it looks like Cappadocia, and that is insane.

It is nothing special, but if you like an easy walk in natural environment, then it may be a very interesting option.

​The trail is easy, less than 3 Km long, and the rocks do show some odd shapes, feeding the imagination of those who gave names to each section or single rock.

This is a very easy and interesting trail, for a short walk.

Located a few kilometers out of town, this is very well signposted and prepared to people of all ages.

​The appreciation of the many shapes of the rock formations advise a calm walk.
​You must know exactly what you are about to see – this is not a tourist trap, but… almost!

I read somewhere that this place was very similar to Cappadocia.

Well, Cappadocia is fabulous, and that drove me to the place, for a disappointment.

​The comparison is absurd. This is a trail in nature, 3 Km long, with a few strange rock formations. If you are aware of that, then you will appreciate it, because it is an easy trail, and one of the most interesting that I have seen. If you expect more than that…

The river is small, but with a clever preparation they take all the possible advantages of it. In a cool landscape, with the hanging houses above, it is a good place for paddling in all kinds of small boats.

One of the most remarkable details in Cuenca is the dramatic combination of history and nature.Monuments, canyons and river compose a strong combination, with breathtaking views in many points.

​No matter what you like, I’m sure you will find something interesting in Cuenca and its surrounding area.

Back to Cuenca page
in Cuenca
| Tags: To see