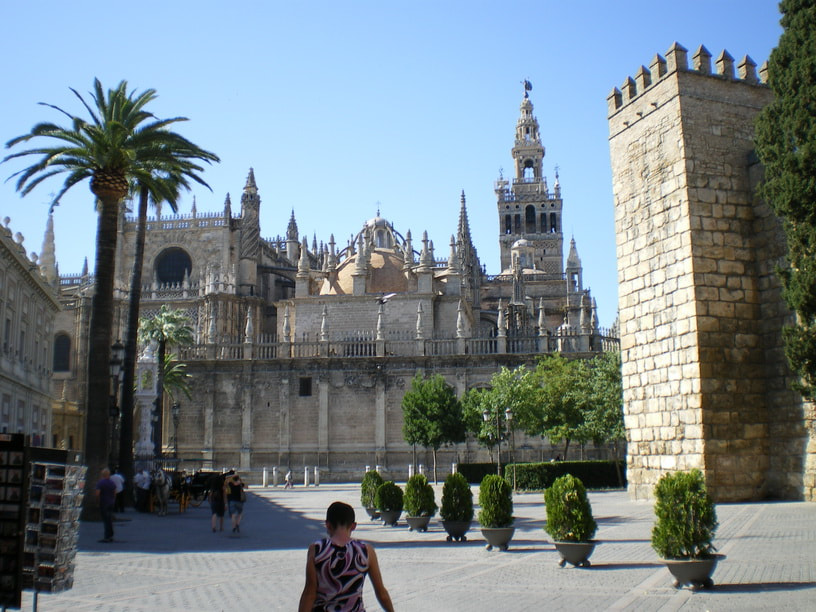 The international image of Spain connects us to Andaluzia.

Sevilla is the heart of Andalucia.

Inner Sevilla
Not to be missed, the narrow streets, the interior “pateos”, flowers everywhere, cast iron windows, I mean… Spain at its best.

It deserves two different visits: in the afternoon, protected from the sun, to feel colors and shapes, and by night, to “live” the city, and watch “flamenco” in one of the many “tablaos”.

Well… this was my vision in summer.

I’ve been there again in winter, and… less flowers, closed “pateos”, but always pretty, and always… spanish.

This one of the most visited places in Seville, and I visited it in 1963.

​Of course, I don’t remember much of it, and tried to visit it again this time. No way, time was not enough to enter!

Contrasting with the narrow streets of the quarter, this small square is one of its the larger spaces.

​In the centre of the square, the cross of Cerrajeria, a remarkable metalwork from the 17th century, marks the place of the former church of Santa Cruz

After the Christian conquest of Seville this city became one of the greatest Jewish communities in Spain. Santa Cruz was one of their quarters, and, though their four synagogues were transformed in churches, their signs are still present.

Alfaro is just another beautiful square of Santa Cruz quarter, close to Juderia, with a nice palace, but the main attraction is Murillo gardens.

The landmark of Santa Cruz is the beauty of the inner “pateos”, decorated with flower pots. In winter it looses something, because the “pateos” are closed and with less flowers.

Time to enhance the iron works in doors and windows.

Discreetly located in one of the narrow streets of Santa Cruz, this two floors building is one of the most important of Baroque in Seville.

It has a peculiar courtyard with high level arcades.

​Built in the 17th century and originally a residence to priests, it houses today Velasquez centre.

The second church of Seville, in size, St. Salvador church, was built in the end of the 17th century in Renaissance style, with several Baroque altars.

At the northeastern entrance of the typical quarter a small square is covered by the usual esplanades, facing Altamira palace and the church of “Santa Maria la Blanca”.

Giving name to the square, this neoclassical church was built in the 18th century. It is a little bit out of the main touristy places, and it was closed when we passed there.

The square at the end of Constitution avenue is bordered by beautiful buildings, with evidence to Town Hall, a Renaissance building with a Plateresque facade.

​I don’t know if it is possible to visit it.

The avenue facing the cathedral is remarkable – wide, bordered by some of the most beautiful buildings in town, I think that it concentrates, all the time, about half of Seville’s total visitors.

This perfect example of Gothic architecture, enriched with the Muslim tower of Giralda and “pateos”, it’s a cool place in the furnace of Seville, with lots of treasures to justify a long and relaxing visit, with special evidence to Colon’s tomb. Built in the beginning of the 15th century, it is the third largest church in the world, and so beautiful, that I must not waste your time describing some of the beauties that you need to discover locally by yourself, with the help of a good guide.

However, if it means nothing to you, there’s another reason to approach it – It is also the central place from where horse ridden carts depart, covering the touristy area in the easiest way to do it.

The minaret of the old mosque was kept when, in the 16th century, the mosque was demolished to build the cathedral.

Later on, an earthquake destroyed its top, replaced by a belfry and topped with a four meters high statue that turns according to the wind.

​Giralda is a Spanish name to weather vane.

The only things that remain from the mosque built in the 12th century and replaced by the cathedral are the tower – Giralda – and the adjacent cloister, called Pateo de los Naranjos because it is all planted with orange trees.

The Muslim origins can be clearly seen in one of its doors, called Puerta del Perdon.

For more than 40 years I don’t enter the Alcazar, with memories fading.

It was supposed to be this time, but it was closed in January 1st.

​ Bad luck, but it there will be more times in Seville.

Inside the walls, the only visitable area of the closed Alcazar in January 1st, was this square, whose name comes from the tradition to display there the flags of the royal visitors to the palace.

Surrounded by the cathedral, the Alcazar and the Royal Archives of India, this wide square is the main hub of all touristy movements in Seville.

It has an image of the Virgin in the centre, but its name comes from another small monument close to the archives.

​It is surrounded by several palaces, such as the Hotel Alfonso XIII, the Tobacco factory, or the “Casa da Moeda”.

Sentinel by the river

Once covered by golden tiles (hence the name – Torre del Oro), this almost round tower was used to protect the harbor, with a chain that closed its entrance.

Today, it houses the Naval Museum.

Maybe getting its name by opposition to its neighbor, the tower “del’Oro”, this octagonal building comes from the 13th century and has recently been recovered (I didn’t see it in all my previous trips), though not yet suitable to visit.

In 1929 a very beautiful building was made near Maria Luísa park, for the Spanish-American Exhibition.

Today, it is used by the government, and it is a great detail, contrasting with the green of the park, generally easy to visit because of its proximity to the historical centre.

PLaza de Espanha and its surroundings were suffering strong restrictions, caused by many current works.

The beautiful tiled panels in the Plaza were covered, but they reproduced the originals in the fences.

A nice idea, but suggesting that the works are there to last.

The pavilion of Seville to the Ibero American exhibition of 1929 became a theater and a casino. I didn’t enter, but couldn’t resist to the building’s nice look.

The old Seville pavilion in 1929 Latin American Exposition has a selected restaurant “Café de Casino” where, sometimes, there is live entertainment.

For a long time I didn’t go there, because I had no time, but could see from distance that some of the buildings that I visited during EXPO 92 still stand in the island. I know that the area around the lake was transformed in an amusement park.

More than using the attractions installed in the park, I was curious to compare with the original that I still have in memory.

Well, visiting with the grandsons, who has time and attention to comparisons? They had big fun… I mean, we all had big fun.

in Seville
| Tags: To see