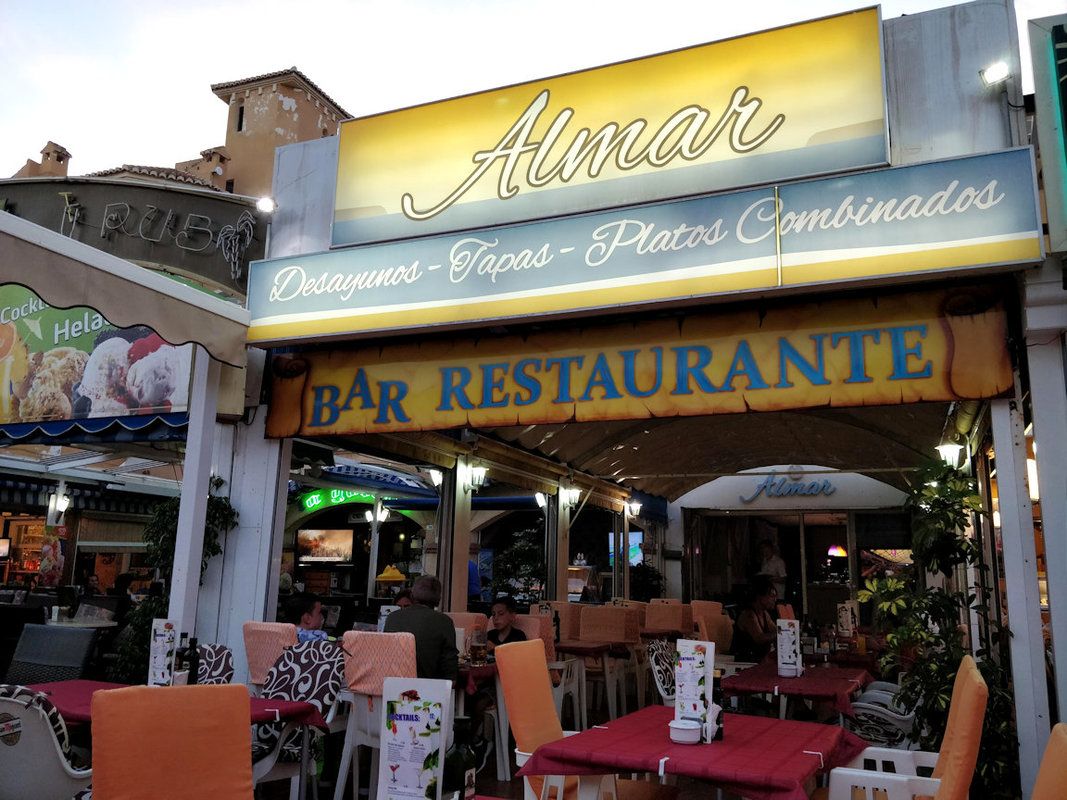 Eating in Roquetas, as in many other beaches in Spain, offers a multitude of options, for all tastes and budgets. Here are the ones we tried:

In a rank of several restaurants side-by-side in the second line of the beach, this restaurant seemed to have the lowest prices for a light dinner, and it was our choice.

It matched our expectations, the food was reasonable (though the “paellas” were a little bit saltes for our common tastes), and the price was fair.

No special reason to return, nor to skip it.

An attractive esplanade with several fans, in a not very hot evening, invited us for dinner. Five of us shared four “Roscas andaluzas”, a huge wheel of bread filled with different mixes of cooked food. They were appreciated, everything else was normal, and the price very reasonable.
It is close to the hotel, so I think that we will return.

With a closed restaurant at its side, its almost empty esplanade, in August,  gave us the idea that the restaurant may not have a promising future.
​
We risked, anyway, and the present was satisfactory –  Well served dishes, tasty food, and moderated prices.

I hope I was wrong, but when we left the sensation of emptiness remained…

When we sat, the prices seemed a little bit high, but, at the end, we paid as usual.

Those savings were the result of the option of half the group, to replace the regular dishes by “tapas”.

​Nothing special, nothing to complaint, just one more meal.

We risked, and had the cheapest  meal in Roquetas. The tapas were poor and not much elaborated, but the steak was really tasteful and well served.

The women of our group said that the tapas here were smaller than in the previous restaurants, but I noticed that there was more variety, and the preparation was more elaborated.

We ordered three normal dishes and they were well served and tasteful.

The best of all… the price – much cheaper than all the other meals. That may be the reason why, when exiting, we saw the long line waiting for our tables.

When a group of women and children cross half of the town to have an ice cream, it must be good.

I didn’t eat it, but I was the only one, and I think that I must be prepared to return in the next days…

Someone gave us a leaflet in the beach, promoting this restaurant, and, as we had no reason to refuse it, and wanted to try anything new, we went there.

It was easy to understand why they have to announce it in a hard way – it is somewhat hidden, and very discreet.

The service was gentle, the prices were low and the food acceptable.

After a week, we decided to change, trying the Greek cuisine.
It was a wise decision and a good choice.  The service was slow, and not too efficient, but the food was really good and… different.
We tried several dishes, and two of them were great surprises. Of course, our knowledge of Greek didn’t allow us to remember the strange names

The last meal in Roquetas was, maybe the best – excluding the buffet in the hotel, and the challenging Greek Eudoxia.

Some of us ordered a regular dinner, the other opted for tapas, and everybody was pleased at a nice price.