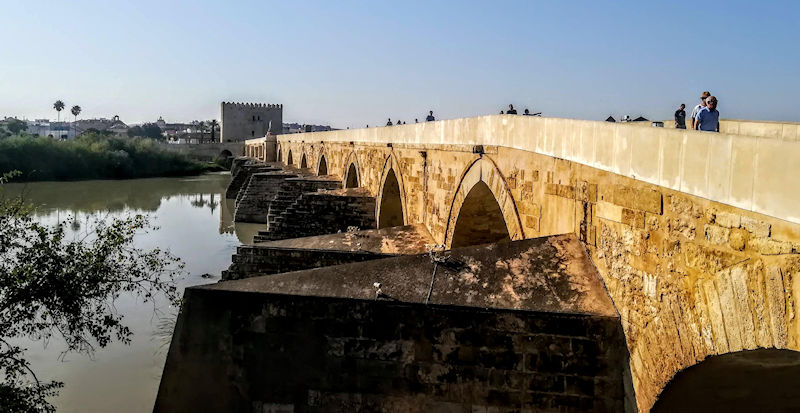 The Mixing of Cultures

Land of history and romance, Cordova is out of my usual ways across Spain. But the challenge of visiting its famous mosque made me go plan an express visit. And I’ve been back more times.

I admire all the examples where one religion accepted something from its forerunner, showing a cultural respect uncommon in past days. We have it in Portugal (for instance in Mértola), but in small scale. With Saint Sophie, in Istanbul, this cathedral is one of the most famous in the world, with the curiosity of their evolution occurring in opposite ways. And with advantage for the Spanish.

In Saint Sophia the christian symbols were covered for centuries, while in Cordoba the Mihrab still stands in its opulence.

Linking the tower of Calahorra to the historic city, across the Puerta del Puente, this bridge with almost 2000 years still works, as the easiest way across the Guadalquivir in central Cordoba. Halfway there’s a statue from the 16th century.

The Guadalquivir, more than a river, is a reference in Spanish culture, history and poetry. Its peaceful passage by the historical Cordoba, reminds the Moorish times, well preserved in most artifacts used to retain or extract the water. To understand all my feelings you need to:1 – Learn Portuguese or Spanish2 – Find a record of João Villaret3 – Listen to him asking: “…Antonio Torres Heredia.Camborio de dura crin,moreno de verde luna,voz de clavel varonil:¿Quién te ha quitado la vida cerca del Guadalquivir? …”From “La muerte de Antonito el Camborio”, by Federico Garcia Lorca. (IF you did it… good! You may keep on listening to the magic Villaret. If you didn’t, at least, try to read Lorca… in any language!)

in Cordova
| Tags: To see