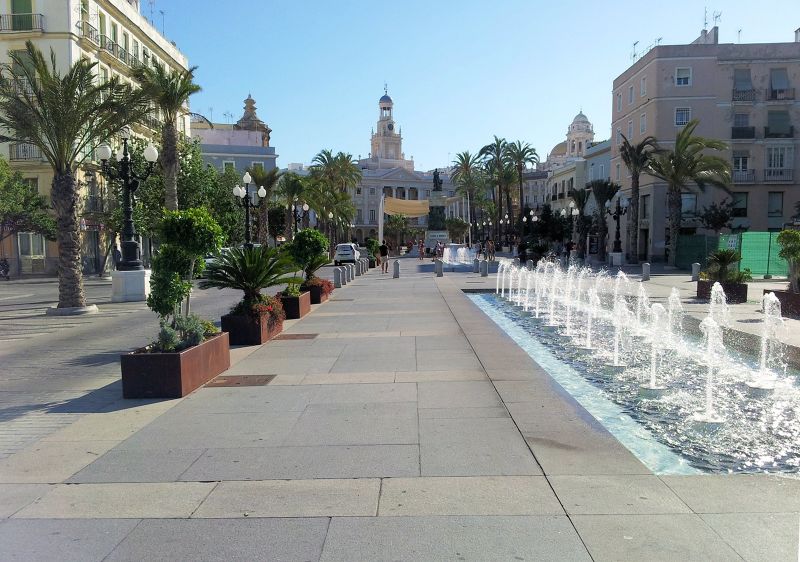 I’ve been in Cadiz for the first time in 1963 and it didn’t impress me much. Several times after that I passed in the area, skipping it because… it was not interesting.

This year I spent two weeks in the facing city of Puerto de Santa Maria, and visiting Cadiz was almost mandatory, but, my son had the information of a colleague who lived there for some time, that it was ugly.

So, the visit was postponed until almost the end of the vacation, and it was done in a rush.

We all felt sorry, because we should have given the city a little more time – it is not ugly, it is lively, and it has, for sure, several motifs of interest for all kind of tastes in the family.

​We tried to correct things repeating the visit two days later, but, there is still much to see and do in Cadiz. For now, let’s bury that silly information about the “ugly” city, OK?

The Plaza de España is a large and modern square close to the port, dominated by the Monument to the Constitution of 1812.

​This beautiful monument is a project of the architect Modesto Lopez Otero and the sculptor Aniceto Marinas, and it was finished in 1929.

The towers were the first thing travelers saw when arriving sea, and Cadiz became famous all over the world thanks to its watchtowers.

The watchtowers of Cadiz (they were a total of 160, 126 nowadays) show a clear influence of North Africa. Generally watchtowers were used between the 18th and 20th centuries.

​In the 18th every merchant decorated his house with a watchtower, thus evidencing their prosperity.The beauty of Plaza de España is enhanced by a few watchtowers in background.

Surrounded by some of the most commercial streets of Cadiz, this square, known by the several stall selling flowers, is one of the liveliest places in the city.

Curiously, the square gets the name from a Spanish politician but the statue in the square is from Columela, a roman writer, that gives name to one of the adjacent streets.

​He is considered the “father” of the Carnival of Cádiz.

​Several times awarded, he won the Golden mask in 1969, the highest award to an author or performer of the Carnival of Cadiz, and a small statue facing the sea in Caleta beach.

​A small nice area to refresh a little during the strolling across town.