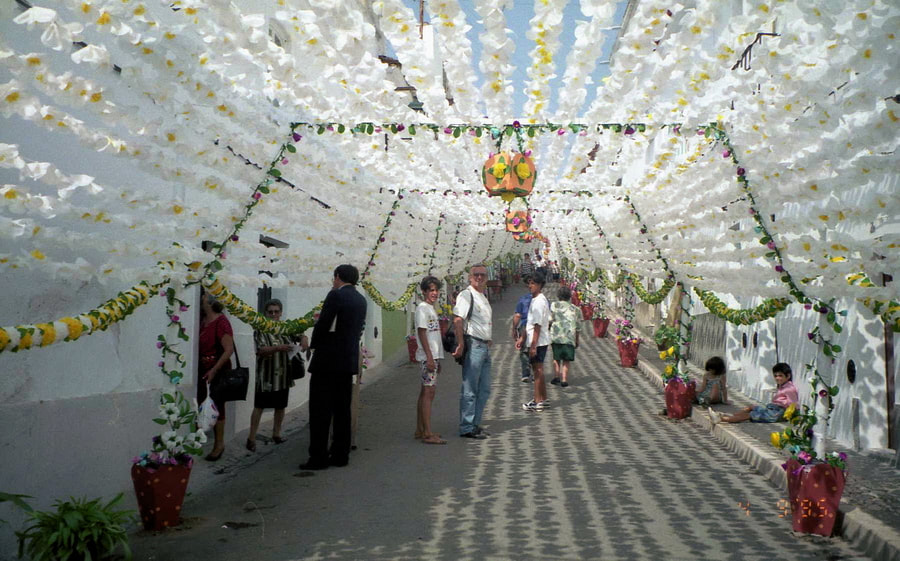 Some tips may help you to understand Portugal, and to ease your trip.

It’s impossible to drive across the country in summer, without stumbling in one (or more) popular feast.

You will see the “arraial” – paper flags all over the area – hear the noise and feel the confusion of cars.

The Portuguese venerate hundreds of saints, and each town or village chooses some of them to celebrate in summer. What is all about?

Well, the priest celebrates a mass, if the saint is important there will be a procession, and afterwards the people meets in the “arraial” listening to some (bad) popular music, eating occasional “petiscos” talking and laughing. So… why not? Do you want a better opportunity to meet local people and make friends?

Eating is the Portuguese’s favorite sport. So, there are “stadiums” all over the country.

​Don’t waste your time asking for the best cuisine – everybody will tell you that the best is their local cuisine.

They are being honest, each one prefers his own recipes.

Wherever you go, you may find some special menus, sometimes exclusively in that restaurant or region, and many of them drag thousands of visitors to… eat.​

Being Portuguese, don’t get surprised if I tell you that, after tasting dozens of different cuisines, I agree that the best one is… yes, Portuguese. I could tell you about lots of dishes, for instance bacalhau, cooked in 1000 different ways (and one more, the one I tasted today at lunch). And Cozido a Portuguesa, and Leitão a Bairrada, and Cabrito, and cataplana of… and…

Excuse-me, I have to stop, it’s dinner time, but do come, and see for yourself. Believe me, if the stomach is supposed to be the entrance to each man’s heart, it surely is the entrance to Portuguese’s soul. Table means… friendship.

If you decide to drive in Portugal (and it uses to be a good idea, since everything is near and public transport is here and there inefficient), give a special attention to some details:

1 – The roads are usually very good and often jammed, or very bad.
​
2 – Most of the roads have no shoulders, so you may encounter a pedestrian, a cyclist or an animal in your way.

3- Though improving their behavior in the roads, the Portuguese are “nervous” and competitive in their cars. If you’re Latin, it will be easy, but if you come from a calmer country you may feel uncomfortable.

4- The road signs are acceptable in highways and the new roads, but absent or confusing in most of the old roads, and inside cities.

5-To leave a car unattended uses to be safe in the small towns, but increasing the risk as the town grows, specially with goods seen through the windows.

6- Don’t hesitate to ask for help in any circumstance. Locals are friendly and always willing to be useful and nice.

​7- AND REMEMBER: THE BEST SIGHTS ARE ALWAYS IN THE SECONDARY ROADS

Portuguese are proud of their independence from Spain, and may get offended if CONFUSED with Spanish.

However, Spanish people are well received in Portugal, and the attempts to communicate between both languages created a new concept: “Portunhol”.

That’s what we call to the result of a Portuguese trying to speak Spanish.​

Both languages seem alike when written, but they are very different when spoken, the Portuguese being one of the most  difficult languages in the world, because of its use of closed vowels (Brazilian is an evolution easier to learn, because it uses less closed vowels).

​Portuguese, generally, do understand Spanish, if spoken slowly, but it doesn’t work the other way. That’s where “Portunhol” may become useful.There’s nothing to be afraid of, concerning language, when coming to Portugal. Everywhere you will find someone speaking English (or trying to), French and Portunhol. Get a good dictionary, and enjoy your time, in a real welcoming country, with a welcoming people.

Maybe you are alerted to the risks of dishonest taxi drivers (If you weren’t, you are now!), charging in excess.

They exist, and specially when exiting from the airports you must be careful. However, if you set the fare before leaving, you will discover that the taxi driver is a nice and friendly guy, that, in the expectation of a small tip, will assist you far beyond his obligations.

Remember, no one knows better the towns and their secrets than taxi drivers (well, in the villages without taxi drivers, you have the barbers).

A few years ago, some friends decided to create a shop online for Portuguese crafts.

They have in mind to choose the best in several materials that it is made in our region (Leiria District) and, if succeeded, enlarge the idea to the whole country.

It’s a nice site, and, even if you don’t want to buy, it’s a good place to look at some examples of top quality in Portuguese handicrafts.

Porto-Algarve in two and half days

Someone demanded a suggested itinerary to travel from Porto to Algarve, arriving in the afternoon of the third day. There are many options and this is one of them (scheduling time is just a reference to help you to understand the needed time).

9.00 Leave Porto taking A1 south, exiting in Leiria to IC2 and driving to Batalha

15.00 Drive back to Alcobaça until Valado, to pick A8 south, exiting in Óbidos

17.45 Proceed to Lisbon to check-in in the hotel, refresh and rest a bit.

20.00 Leave the hotel, walk a little downtown, and take the subway to Marquês de Pombal. See the statue, and move up Parque Eduardo VII along its right side, to see the romantic constructions, the lake, and finally to enjoy the sunset from the top of it.

21 – If it is Thursday walk to the restaurant Nini (make a previous reservation) to have dinner with Fado. When tired, take a taxi back to the hotel. In the other nights try to listen to fado in Bairro Alto or Alfama.

9.00 Drive to Sintra, and go straight to Palácio da Pena, that opens at 9.45, giving you the chance to park in a very difficult area. Visit the palace but don’t waste much time with the park.

11.00 Descend to town and visit the strange Parque da Regaleira or the City Palace

15.00 Leave Cascais following the Marginal road. You may stop some minutes in Estoril, the remaining road is just a scenery road with several small beaches which means lots of traffic and difficult parking. You may make a few photographic stops, but try to arrive in Belem before 17.00 and go straight to Jerónimos. Visit the monastery, and walk a little eastbound to Casa dos Pastéis de Belém, and taste their exclusive pastry. Return to the parking near Jerónimos and drive a little back to the Tower of Belem. If you arrive before 18.00 you may enter, but the interior is poor.

Drive eastbound in the avenue by the river to stop in the area of Discoveries monument and see the area. Return to your hotel and forget the car.

If you’re not tired enough you may walk a little downtown seeing something of the highlights (Praça do Comércio, City hall, Rossio, Restauradores, Santa Justa lift).

20.30 have dinner in Charcutaria, near Praça Luis de Camões, and end your night strolling in Bairro Alto.

Drive to Évora. Visit the city and have lunch in Fialho. According with your time proceed to Algarve. If you have time you may consider a detour to Monsaraz.

​In my other pages you may get an idea about what I suggest and why I do it. Of course, there are dozens of alternatives (Coimbra, Bussaco, Tomar, Ericeira, Sesimbra, Arrábida are other top destinations) but considering the available time this may be the richest option. The scheduling time is tight but not too much, and you may also decide to skip or to shorten a visit.

Fatima is a common destination, justifying some general suggestions:

If you come from the middle east do have in mind that there are no direct connections to Portugal. You have to make a stop in another European capital. The best (cheaper) are London and Paris, so, if you want to see something in France plan your long distance flight to Paris.

There are several low-cost connections to Portugal from Paris (Easyjet is the best) but you may check several companies in a couple of sites that do a terrific job: skyscanner, momondo and kayak are very known, and I recently found azdreams that seems rather efficient in Portugal and Spain.

I live 50 km far from Fatima and I know that, unless you have strong religious reasons, a couple of hours will be more than enough, but there are several wonders close to Fatima that you shouldn’t miss.

In a shortage of time, I suggest that you stay in Lisbon and book a one day trip to Fatima, visiting, if possible, at least Óbidos and Batalha (but Nazaré and Alcobaça are also top visits). You may check it in City sightseeing.

​Don’t plan to use train to Fátima – the station with the same name stays very far from the city, and the connections are not too frequent.

​Book ahead, if you plan to stay there, around the 13th of each month from May to October

If you plan to visit Portugal, or to deal with Portuguese, there´s a word that you should understand – “Desenrascanço” or in its verbal form “Desenrascar”.

It has no translation in English, and browsing the net searching the best way to explain it, I found a silly text that, despite some nonsense that shocked the few Portuguese that commented it, gives a close idea. The site is called “The 10 coolest foreign words English language needs” and says:

“Means: To pull a MacGyver.

This is the art of slapping together a solution to a problem at the last minute, with no advanced planning, and no resources. It’s the coat hanger you use to fish your car keys out of the toilet, the emergency mustache you hastily construct out of pubic hair.

What’s interesting about “desenrascanço” (literally “to disentangle” yourself out of a bad situation), the Portuguese word for these last-minute solutions, is what it says about their culture.​

Where most of us were taught the Boy Scout slogan “be prepared,” and are constantly hassled if we don’t plan every little thing ahead, the Portuguese value just the opposite.

​Coming up with frantic, last-minute improvisations that somehow work is considered one of the most valued skills there; they even teach it in universities, and in the armed forces (Ah Ah, Ah!).

They believe this ability to slap together haphazard solutions has been key to their survival over the centuries.(Ah Ah, Ah!) ​Don’t laugh.

At one time they managed to build an empire stretching from Brazil to the Philippines this way.(Ah, Ah, Ah! – my next visit: Portuguese Philipinnes)Yes, don’t laugh! I promise to stop laughing too.

It seems to have been written by one those Americans that we see in TV answering that Australia is the capital of Paris, but it gives an idea – “Desenrascanço” is the ability to go beyond planning if anything fails, and to find a solution.

So, if you travel near S. Martinho do Porto, and find a pillar in the middle of the road, at the exit of a tunnel, don’t be surprised – it is not madness or incompetence . It is a monument to the national “Desenrascanço” by an architect that, probably, studied in one of those mentioned universities.