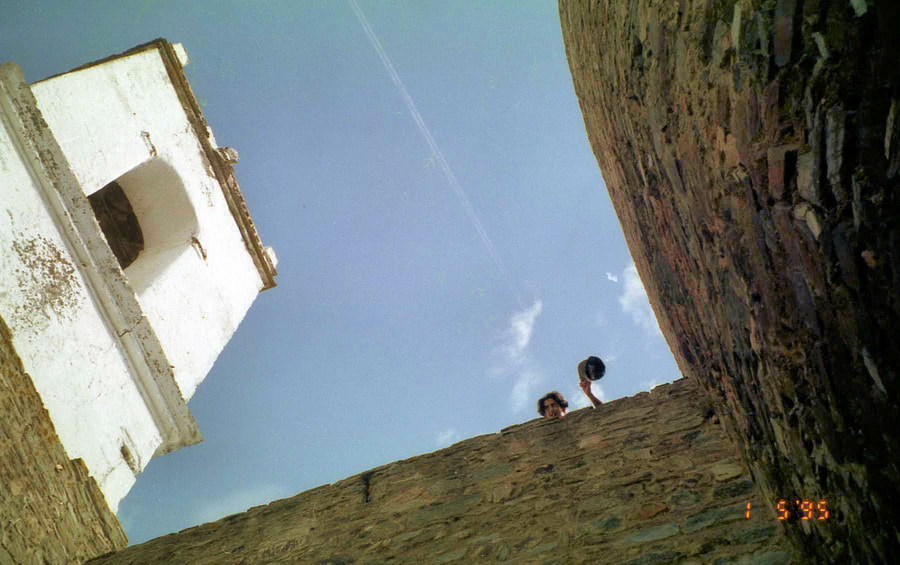 Alentejo is a hot, dry and plane area in the southern half of Portugal. In such a plane area, each mount gets its own importance.

That is so true that in the region monte is almost the equivalent of house. When and where it appears an higher hill, generally a city was installed atop of it, protected by walls.

In Alentejo life flows slow (veeeeeeeeeeery slow in Portuguese jokes), which helps to preserve the sites.

One of the best is Monsaraz.

​ While the active life moved down to the planes, to Reguengos de Monsaraz, the historic city stands by and inside the XIII century castle, with excellent sights over Guadiana river till Spain.

Strolling in the narrow ways of Monsaraz is relaxing. Here and there, churches, bars and handicraft shops, allow a refreshing shade.

In the plane and dry area called Alentejo, some hills are usually chosen to concentrate the small towns.

In the plane, Reguengos de Monsaraz is a new town that became capital of large scale wine producing, but atop the hill, inside the medieval walls, the old town has been preserved, and keeps the look of the traditional villages of Alentejo.

Modern life is in the plane, history in the walled hill.​ Though too much touristy, it is one of the most attractive points of Alentejo, with the only drawback of standing far from everything, forcing us to plan an express visit, and never a stop in a common way.

Cars are not allowed inside the walls, but parking is

easy near the main door of the walled village. To preserve the village most of its live and development was transferred to Reguengos de Monsaraz, in the plane and not too far.

​Monsaraz lives to and from tourism, and passing the main door is really a sensation of entering the past.

It was built in the 16th century, during the black pest, because the older one couldn’t receive all the dead needing burying.

It has a heavy and strong look, almost Roman, but it was built according to Renaissance plans. It has a gilded altar and some tombs

Discreetly lined with the white houses, there’s a small church that (it seems – I couldn’t read much about it) is dedicated to St John.

​It was closed, so I don’t know how to visit it (and if it deserves to be visited or not).

At the very end of Monsaraz main street there’s the castle.

It has a particularity – I think that it is the only one in the world that houses… a bullring.

​Funny detail, in a building that dominates a very beautiful small city inside its walls.

All the houses in Monsaraz respect the general medieval look.

​Some of them are really old and classified, as, for instance the Governor’s house, used in the old days by the military governor and the out-coming judges, nowadays belonging to Évora university.

Located in the main street, it was built in the 14th century. and recovering works in the middle of last century, discovered two interesting frescoes.

One of them, called “The good and the bad judges” became famous.

in Monsaraz
| Tags: To see