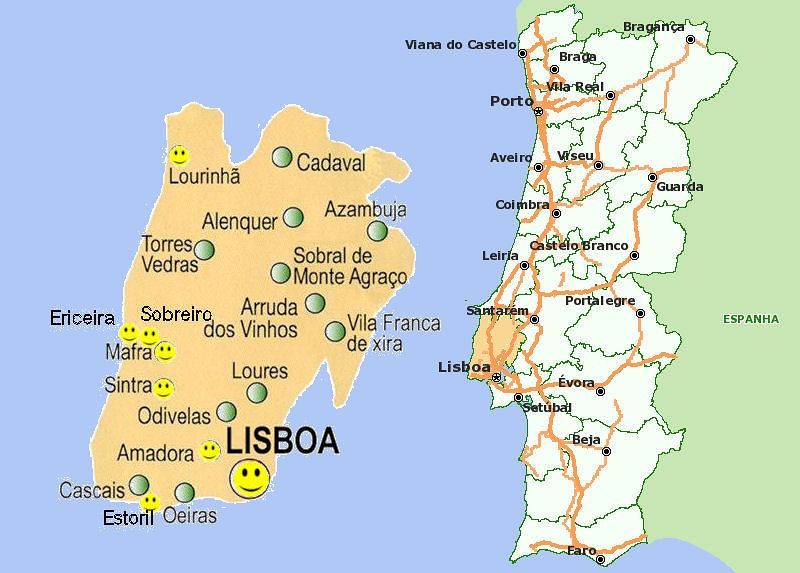 Dominated by t​he great capital this is the district that 80% of the tourists know better (the other 20% go straight to Algarve or Porto).

Lisbon is, of course, the top destination, but Sintra is also almost mandatory, as the coastline connecting Lisbon to Cascais. What else?

To complete the visit to Lisbon and included in the trip to Sintra and Mafra, you’d better allow some more time to see the generally called “saloia” area, meaning rustic, because, in the old days, their agriculture fed Lisbon.

By the sea, Ericeira was a great fishing port, still showing well the traditional look and it being a good place for a quick stop, from two hours to two weeks.

​This is, also, one of the top destinations to eat seafood.

Capital of the district and the country, Lisbon it’s one of the top places to visit.

It has not the variety and richness of most European capitals, and some foreigners become disappointed with the degraded condition and even dirt in some of the old quarters, but to enjoy the visit it is important to skip those unaesthetic areas (that all the towns have, as a matter of fact) and to dedicate more attention to the effects of light in the clarity of town. It is also important to follow the river from Expo 98 (a well succeeded project of modernity) to Cascais, the British preferred place. In between, Belem is a world by itself, but Lisbon is also a good base to short trips to the many “must see” in a short distance.

When, in 1963, I moved to Lisbon, Loures was a village almost 10 miles away, where we rarely went, and usually just passing by. With the disordered growth of Lisboa, Loures became a peripheral city, in practice almost a neighborhood at the edge of the city.

Some commercial and service activities were transferred to the area, and Loures is today a city alive and with an urban image.

​From the tourist point of view we can say that Lisbon is just there, Sintra nearby, Mafra not far…

Visiting for a lunch and returning

Lourinhã is known mainly for its dinosaur’s trails. In my first visit I didn’t see them, but had a nice lunch with friends.

Years later, with a grandson, dinosaurs were mandatory.

From Lisbon, this is the beach that achieves the best ratio between the quality of the beach and the distance from town.

Located halfway between Lisbon and Cascais, Oeiras is not a common stop for foreigners, being used mainly by Portuguese looking for good beaches close to Lisbon.

​A fastly growing city, not being a top destination, is gathering each more reasons to attract visitors, showing something new each time I visit it.

Half an hour distant from Lisbon, Sintra is one of the few Portuguese “must see”.

My many visits were superficial, but recently, VT forced to a more attempted look and new photos.

The great point is that, each time, Sintra has something new to reveal.

​Be my guest in my Sintra page.