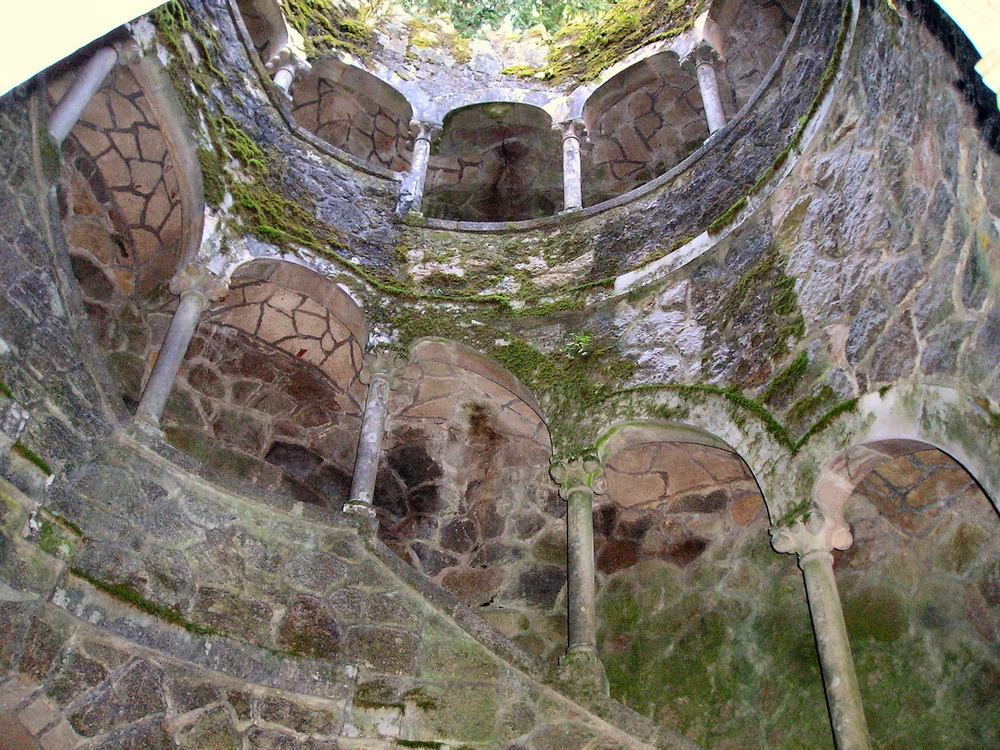 Immortalized by Byron as the romantic Portugal, Sintra is an island of green freshness close to Lisbon.

Castle, palaces, beaches, and the rural tradition of feeding Lisboa make this place a varied and mandatory visit, even without leaving Lisboa.

“I offer a candy to who guesses Pena style”.

It’s a funny challenge: what style?

All of them are there, but none of them dominant. The palace seems to be a collection of styles and influences, without any kind of option or preference.

​Maybe kitsch, maybe revivalist, maybe too complex, maybe humorist, maybe an accident, it is there, and it is interesting to explore.

Built in the 19th century, this is a “German” castle, with a rather artificial look, but that (and its location) is what makes it so interesting, because its bayerisch structure is decorated with unexpected Portuguese and Arab elements.

The most strange element in the complex mixture that is this palace, is the door with the Triton.

​Willing to represent the world’s creation, this door is the theme for the longest talking of the local guides about mythology… the four elements… the king… and…

Maybe the wisest idea would be the official version, in my free translation:

The decoding of this portico has given place to several theories, many of them without foundation. Most probably D. Fernando proceeded, in the conception of this portico, as he did in relation to almost all the decorative arts in the Pena Palace: to recover elements from the Portuguese culture.

And there are two possibilities:

One is the work of Damião de Góis of 1554, where it is mentioned a Triton that had been seen singing with a shell in a beach near Colares. The other,  Luís de Camões also mentioning a Triton in Canto IV dos Lusíadas, whose description resembles the monster of Pena.

Being almost a catalog of the prevalent aspects in Portuguese art, tiles couldn’t be absent in Pena’s Palace.

One of the facades is totally covered by tiles.

​It’s not one of my favorite details.
​

One of the finest details in Pena’s palace is the way they kept everything as in king’s time. Advancing from room to room, we feel like the place keeps being in use, expecting to find the owners in the next room. The small dimensions of some rooms, the vision of the king’s artistic weakness, everything is well displayed.In my last visit pictures were not allowed anymore.

It’s a pity! In a prior visit there were no restrictions, except using flash in the chapel, and I don’t know what damage could a photo cause to the palace.

An old convent atop Sintra mountain was destroyed by Lisbon earthquake 1755 only surviving the chapel.

It was around it that the palace was built, in a strange but beautiful mix of many styles.

​The masterpiece in the chapel is a work in alabaster and marble from the french sculptor Nicolau de Chantereine.

Standing atop the mountain, one of Pena’s highlights is the gorgeous views.

​The palace has a public coffee shop, where, in a bright day, you may sit and enjoy the wide views, reaching as far as Lisbon and the ocean, surrounded by the palace’s magic.

Yes. some of Pena’s highlights are the great views – looking east, Lisbon may be seen, 30 Km away, and in the opposite direction, the views over the coastline are breathtaking.

Sintra has so many interesting points to visit, that most tourists visit the palace and skip the park. If you have time, don’t do it.

The park has a great botanical variety, and some views are great.

​Remember – the ticket to the palace includes the park, and you may also visit only the park. If you are visiting also the other monuments check for a combined ticket and save.

“Man of scientific spirit, very large culture and rare sensibility…”, is what I read in the leaflet received at the entrance of the park, about the man who conceived the place. I can’t follow him! I find no harmony, no connection between the buildings, no rationality at all. Maybe… that’s the idea. It’s not easy to classify the place, but it surely deserves to be seen.

In USA it’s common to see some rich guys trying to replace the absence of historic architecture with the expensive reproduction of ancient styles.

​In Europe it’s not so common, but… it happens.

One century ago a rich man used the team that built the hotel in Bussaco following a Manueline style to build his own palace.

Beautiful? Well… that’s up to you.

Not so obsessive as the buildings, but still mysterious, the gardens are a pleasant area to stroll, specially in summer, when the cooling in the shades may complement the sun in the beaches.

​There’s always one more detail to appreciate here and there, in a very uncommon garden.

What a strange thing, this deep and elaborated well with a complex staircase descending in spiral to the bottom, to… to what?

​Mysteries, cabalistic symbols, odd elements, this palace and gardens were made to feed… discussion, but it’s a very interesting visit.

A ruin with good sights

It’s nice to see the castle from the city, and its nice to see the views from the castle, but, compared with the other highlights of Sintra, I can’t say that it deserves the 7.50 € charged at the entrance. If you have time, and being so close to the “obligatory” palace of Pena, you may include it in your plans. But there are plenty of more expressive castles in Portugal and expressive buildings in Sintra to see. Anyway, it seems to be one of the oldest (9th century) keeping signs of its later occupation – doors, a chapel, a cistern, so… why not?

For several years abandoned, this beautiful palace and surrounding park has been recuperated, and is again an interesting visit.

​The best information is gathered in its home page, but there’s a short and precise description in:Portugal Virtual

Less visited than Pena, this palace, in its simplicity (and emptiness!), is much more harmonious.

​A nice park allows the option between a quick visit or a long calm day in a luxurious natural environment.

Once the summer residence of Francis Cook, the beautiful Monserrate palace was surrounded by a great garden and forest, taking advantage of the favorable climatic conditions. Always improved year after year since the 19th century, it is now a national monument.

​Palace and park may be visited in several ways, isolated or combining other visits in Sintra, what justifies that you read carefully the park’s page and plan your visit to save a few euros and use well your time.

The centre of town is dominated by the palace, and you must be very attentive when visiting this palace: it is not a common work, but a odd collection of works, for more than 500 years.

​In this single monument you may find medieval, gothic, manueline, renaissance and romantic styles in adjacent structures, combined with decorations using sculpture, tiles or paintings.

The two big chimneys became the landmark of Sintra, and, standing in the centre of town, you can’t miss it.

Built from a Muslim palace, for several centuries it was suffering modifications and improvements. Its general look comes from the 14th century, but almost all our kings used it, always adding something.

It’s a good opportunity to understand the evolution of Portuguese art.

When entering Sintra from Lisbon, the best place to park car is near the balcony with good views over the valley and the hills.

​The historic centre is not far and the views are wonderful.

Sintra is not exactly a beach destination, but, being so close to the sea, some of its beaches are a good break in the normal big doses of history, landscape and art.

​Praia Grande, easily accessed passing Colares, is the biggest (“grande”) beach, and a nice place to rest after the hard walk across the city and many parks.

A trip along the coast will show some beautiful spots. Maybe the most interesting one is the group of “natural” pools in Azenhas do Mar.

Nested in the cliffs, this village is a good stop, with a few pools smartly excavated in the rocks and a small beach that changes each year, according to the “humor” of the sea.

Back to Sintra page
in Sintra
| Tags: Center area, To see