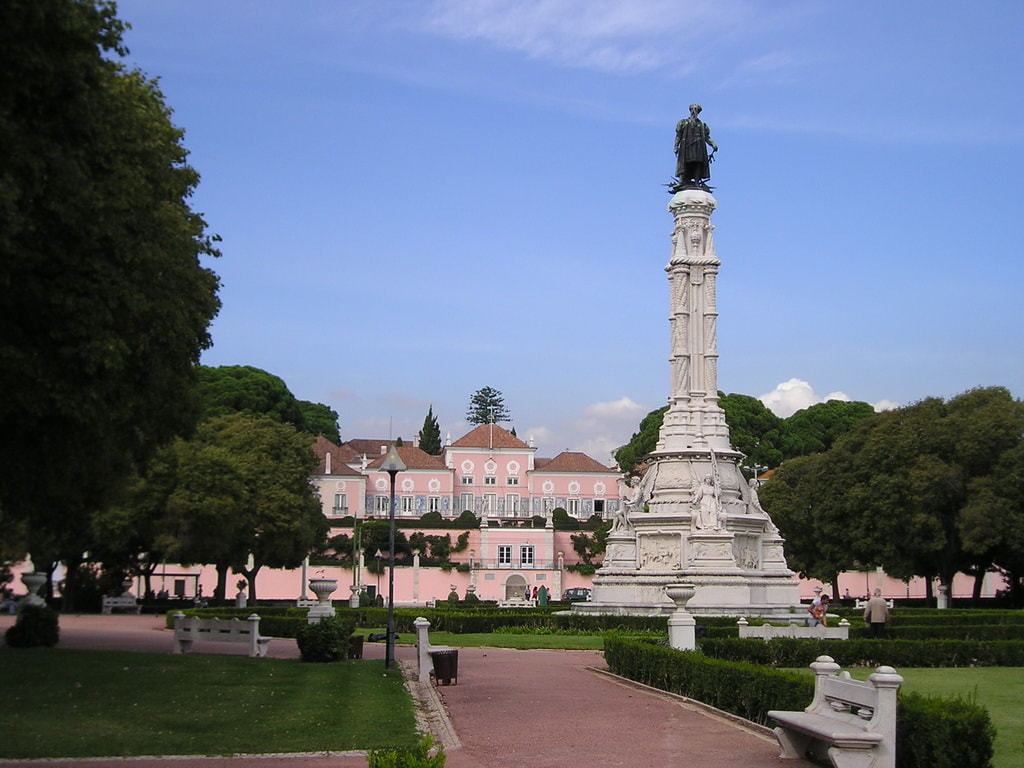 If you have, at least, one day in Lisbon, Belém is one of the things you shouldn’t miss. You may build your own program, from a couple of hours till one or more days.

Supposing that you will have only half day, then you can only have a glimpse of the ensemble of the Praça do Império, visit the Tower and Jerónimos.

The area is still keeping the look won in 1940, when the political regime tried to make an impressive exhibition to hide the colonial nature of our possessions in Africa and Asia, spreading the idea of a multiracial, multicultural, and universal country.​

The gardens and some buildings were kept.

​For instance, the Popular Art Museum (Museu de Arte Popular) and the restaurant in the artificial lake (Espelho de Agua) were part of the exhibition, but the real gems of Belem come from history, with Jerónimos and the Tower on top.

Jerónimos is a wonderful monastery, build in the 16th century, to celebrate the discoveries and to be the king Manuel I’s burial monument. It took all the century to be built, and houses the tombs of the king and his sons.

It is one of the best examples of Manueline architecture (the other “super” examples are Batalha and Tomar, with the famous window), a Portuguese style in transition between Gothic and renaissance, making use of nautical decorations, and that took the king’s name.

The church and mainly the cloisters are splendorous.

In the main corps you can also see the tombs of Vasco da Gama and Camões, transferred there about 50 years ago.

The Portuguese are proud of “their” exclusive style – Manueline.

It’s a Gothic style, with nautical elements, celebrating the discoveries. This style is present in many monuments, as their original concept or in later adding.

​ Jerónimos in Lisbon is among the best examples but Batalha doesn’t stay behind and a window in Tomar is considered the most precious detail of that style.

This beautifully gilded chapel, concluded in 1669 in Jerónimos monastery, was initially dedicated to Saint Anthony.

Despite most visitors focus in Vasco da Gama and Camões tombs, many other may be seen in Jerónimos, with evidence to those of king Manuel and his wife.
​

In the many details to see in a visit to Jerónimos, you must include the tomb of Vasco da Gama, built in 1888 in the monastery that celebrates his successes in India.
​

​The Tower of discoveries

Belém Tower was built in 1515, by order of king Manuel I according to the defense plan of the Tagus estuary decided by his antecessor, King João II.

The tower is replete with Manueline decoration, with crosses of the Military Order of Christ and some naturalistic elements such as the rhinoceros, said to be the first such representation in stone known in Europe.

If you have time you may go inside and up to the top, but if you are in a rush than maybe you’d better save your time for another highlight of the area –the monastery on the top of all.

Most visitors don’t enter the Tower of Belem.

It’s acceptable, because its content is poor and time generally short, but if you have time, and want to discover how it was conceived and used as stronghold, you may go inside and have a look. It is not a waste of time, and it will not consume much of it (time).

Monument to the Fighters in Africa

Just a few meters west of the Tower of Belem, a monument inaugurated in 1994 celebrates the fighters in colonial war (about two hundred thousand and… me).

Surrounded by a long wall with the death’s names, a modern formation pretends to be the symbol of the union among people.

​OK! No problem. It’s just beside the tower, can be seen in a glimpse, and, as a sample of modern architecture, it’s better then the bunker called Cultural Center.

Included in Belem complex, by the river, this museum uses some of the best buildings from the 1940 Expo.

t shows crafts from almost all the country, and if you have no opportunity to discover them in their original location, it may be a quick and easy way to find out what our Country produces in popular crafts.

The Monument to the Discoveries was inaugurated in 1960 during celebrations of the 500 year anniversary of Infant D. Henrique (Henry the Navigator)’s death.

It evokes the maritime discoveries, and reproduces a model that was used in the 1940’s exhibition.

With the shape of a caravel, it is headed by Henry the Navigator with the company of most of the historical Portuguese figures.

From the top, which you can access by elevator located inside the building, you have a magnificent view of the area, having at your feet the compass in paved stone offered by the Republic of South Africa, in 1960, to the celebration, and that between galleons and mermaids, shows the routes of the Portuguese discoverers.

A large symbol of the nautical Portuguese successes exploring the seas, close to the discoveries monument, has been drawn with colorful stones – the “Rosa dos Ventos”.

Contrasting with the black in white of the typical Portuguese cobblestone pavement, this formation is better admired from the top of the adjacent monument.

In a disputed agreement between the government and a rich collector, Joe Berardo, the Cultural Center of Belém has, now, a new museum of Modern and Contemporary art, that, I must confess, I didn’t visit. Yet!

You spent your day in Belem and want to stay for the night? Move to the Cultural Center of Belem (Centro Cultural de Belem, or commonly, CCB). Since its controversial construction, (opened in 1993), most of the nightlife of first quality happens there, and if you arrive in daylight, modern art is always present, as a final touch for an extremely rich day. I didn’t mention dinner! Do I need to? Don’t you know that, close to Belem, near the bridge, the docks are the real capital of Lisbon’s young nightlife?

​Anyway, you have the scheduling program online.

Leaving from Belém, on March 30, 1922, Gago Coutinho and Sacadura Cabral, succeeded in the first aerial crossing of South Atlantic.

The plane, named “Lusitânia” is displayed close to the Tower, in the open garden.

If you have plenty of time (and kids) The Planetarium, right beside the Jerónimos Monastery, may justify your visit.

Recreating the sky at night, their several sessions, presented in Portuguese, English and French, will tell you more about ‘The solar system’, ‘The moon’, ‘The evolution of the stars”, ‘The movement of the earth’, ‘ Earth – Planet Alive’, ‘The universe’, ‘The sun’, ‘The constellations’ and many others.

You just have to choose the scheduled program.

​A Break in Historic Tour

Need a break in Belém?

​East, and behind the Presidential Palace, the Tropical Garden (Jardim Tropical) is a pleasant place to rest and… to breath.

Maybe the most visited museum in Portugal, it is a “Must see”, generally included in the visit to Jerónimos monastery, located at short distance.

It has a precious collection covering three centuries.

The museum was moved to a new and modern building in 2015 but the original and beautiful palace remains being used as a nucleus, now under the name of Royal Riding School.

Pastry is famous in Portugal, mainly for its taste and diversity, but, sometimes, it mixes with art, with surprising results.

​In the carriages museum sugar was used to built a replica of one of the displayed coaches.

Carriages museum was moved to another building in Mai 2015.

I don’t know if sugar “melt” in transfer.

The official residence of the President of Portuguese Republic is a palace built in the 18th century in Belém.

It’s possible to visit the palace but only in organized groups, booked through the palace’s national museum.

A small garden adjacent to Empire square, in Belém, facing the presidential palace, has in its centre a Neo-Manueline monument built in 1902, topped with the statue of Afonso de Albuquerque, a famous governor of India.

One of the less visited museums in Lisbon (It is new, opened in 1996) this museum, in Belém area, shows several displays concerning energy producing.

It was not difficult to gather a good display, since the museum occupies an old thermoelectric central station, keeping the old equipment.

​If you have nothing more important to see…It uses to have some interesting temporary exhibitions.

Built after the 1755 earthquake, this palace was unfinished due to french invasions.

Used by the government for some feasts, is has been restored and enriched with art collections. Its location, in somewhat despised area, means few visitors, but if you don’t mind crossing some degraded areas (under recuperation), you may be surprised by large views, and the splendorous colors of Lisbon.

I heard that it is going to be open to public visits, and that… it is very interesting.

​I will check it out.

Maybe it is interesting! Maybe it is just starting to make and display its collection! Maybe I didn’t see the best part.

I had a professional meeting in this museum, and used the occasion to have a look.

For a lover of the theme or for a museum devourer forced to see them all, it’s OK, but if you have to select, look at the nice building and head to the mandatory ones.

The biggest work of the dictatorship was… a copy. Salazar bridge was an important work, reproducing in Europe the Golden Gate of S. Francisco. I saw and crossed both, and… prefer ours! Not for nationalism, but for three objective reasons:

– The light of Lisbon is unbeatable (even when the fog releases S Francisco’s bridge – 25 minutes each year).
– Lisbon’s bridge is better framed by the views
– The statue of Christ in the southern bank helps a lot.

– Its new name (25 Abril) helps to remember that, no matter how much the dictators spend promoting their names, history generally ends making justice, and erasing their memory.

​Don’t read back! Do you remember dictator’s name?

Sights across the bridge

Facing Lisbon, in Almada there’s a replica of Christ Redeemer of Corcovado inaugurated in 1959.

It is the best sightseeing point to a general look over Lisbon, and the entrance costs 4€.

This area by the river, is the easier to access, and safer (it it is possible to assure that in any city, by the end of the night).

Night that, on weekends, most of local youth extends to the morning, when the hot bread by a awaking river is a temptation.

This was the area for the 5th Euromeeting dinner, in May 2011 – a good choice

Back to Belem page
Back to Lisbon page
in Lisbon, in Belém
| Tags: Center area, To see