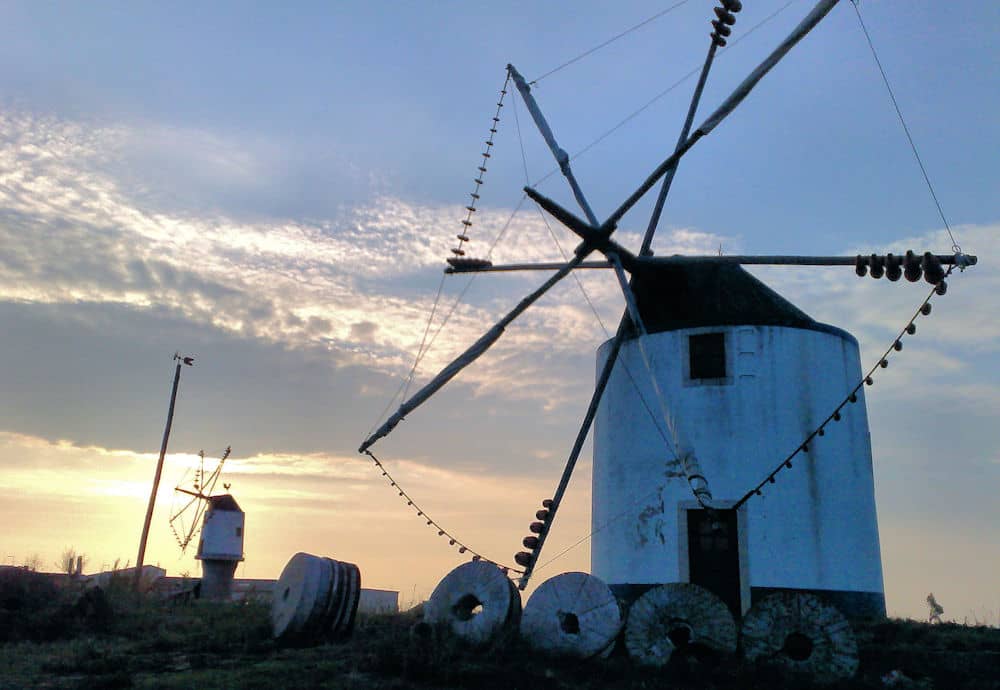 Turquel is not a big city, but it covers a wide area, with several types of landscape, and many small settlements. Some of the interesting details of Turquel are located in those scattered settlements.

Once a landmark spread all over the hills of Turquel, the windmills stopped one by one, until the last resistant. Joaquim Rodrigues, the last miller, died a few years ago. His eldest son decided to keep the windmill operational just for the pleasure of a lasting tradition. Construction is encircling and approaching the windmill, and Raul Rodrigues says that if they approach much more he will demolish it.

​I will never forget the words of the president of the Portuguese Institute for Industrial Archaeology, in Marinha Grande:” A society that doesn’t care about its landscape is condemned as a society”.​

Something wise that our local authorities should have in mind!

In a small house belonging to the Philharmonic Association, ADEPART, a cultural organization, created in 2001 a small museum.

Collecting the local memories, in display there are traditional instruments, books, paintings, and handicrafts.​ One of my uncles donated his funny wooden carvings works, with caricatures of most known personalities, which can also be seen there. The museum was recently moved to an old school.

There, with the great dedication of my friends Hélio, José Manuel and more, it was seriously developped, now really deserving a visit,

Forgive me if I insist. but I have to make justice to my uncle’s sense of humor and manual skills. Though hardly concentrated in only two displays, some of the pieces are really funny.

​ The museum has moved to a more suitable building, and the new exhibition is much better.

Casal de Val-de-Ventos, stays atop the mountain of Candeeiros. It was, in the old days, a remote and poor village, hard to reach and to communicate with the “outside world”. Better roads and the industry of stone extraction, allowed the opening and development of the recent days.

​New villas appear here and there, and the signs of the traditional stone small houses are fading, but still present.

A small lagoon gives the name to this area of Turquel. The lagoon is no more than a big pond, but, with some care by the neighbors, it presents clear water where we may see some big fishes.

​Nearby there’s a very old building, once a oil press.

Included in the Natural Park of Aire and Candeeiros, this mountain is a wild area, excellent for trekking and watching natural life and geologic formations. The sights are awesome, and, from caves to dinosaur trails there’s a lot to see and to do far from the crowds rushes.

Rough environment and wide sights encircle beautiful and appealing spots, for a vacation away from it all.

Atop the mountain, the old house of the guards is a chosen place for picnics, and a overnight possibility for a dozen of persons.

In the way up to the Natural Park, from Turquel, you pass close to a small chapel.

It’s an in-distinctive building, standing as a landmark of the locals religiosity, that made some popular people build it, away from everything, almost lost in the mountain.

Once a year there’s a popular celebration in the chapel, and I think that it is all.

One interesting thing to notice:

The chapel was made in the beginning of the 20th century and rebuilt in the forties. Then, the school was still a luxury only available for some Portuguese. The inscription above the door keeps the memory of those time.

​To understand what I mean you would have to know some Portuguese, at least what is a “Qumição”(they meant “Comissão” – comity)

​Some constructions are lost but in a big farm called “Quinta de Val-de-ventos” it’s still possible to see how they managed watering needs – a big cistern, in ruins, but still gathering some water, may be seen at the entrance.

Atop the mountain, right in the Natural Park, life is hard.Long walls of piled stones have not the purpose to close properties, it’s mainly a way to free small portions of land to use in agriculture.

Those walls, stretching everywhere in the landscape, have been replaced, recently, by a flourishing industry, of stone to construction.

​The landscape remains preserved (well…), but it’s easy to have your attention distracted by the large sights, from Turquel at your feet, until the distant buildings and cliffs of Nazaré, with the sun and sea merging in the haze.

​Quite often, locals go up the mountain, stop a while, and let the eyes and imagination travel around.

The Natural Park of Serra de Aire e Candeeiros is a reserve for wildlife and flora, but these days, the landscape is changing.The “talefe” is a geodesic construction that marks the highest point of the mountain of Candeeiros.

In my youth one of our bigger challenges was to walk up to the mountain, and climb to the talefe.

Deep changes turned the highest point into a midget.

​Will it still motivate the youngsters?

It’s an old tradition taking the children to the fields, to collect a wheat spike and use it to compose a bouquet with wild flowers. The Natural Park of Aire and Candeeiros is not commonly used by locals, but, sometimes attracts visitors from distant places.

It is, indeed, a great pretext to give those happy children a rich day in search of nature.

My friend Avelino is a citizen of the world, whose hobby is… making friends. After many years in USA, he returned home, surrounded by tons of… everything.

So much stuff that he decided to share it, building next to his house a sort of museum.

Unpredictable, and always moving around, the works stop and go, but he couldn’t wait for long and many things are already in display, in a messy but funny “parade”.​​

It’s by the road to Alcobaça, so you just need to stop and smile​. Don’t you dare to stop for a long time, or you risk to get… a new friend.

PS: It is empty now, because he moved the stuff to a warehouse by IC2, but, if I know him, things may change in a glimpse…

Despite the new presence of the aeolian park, the mountain of Candeeiros maintains all its charm. The struggle to survive against the rocky soil, gave place to a profitable stone business, visible everywhere. sometimes attacking the landscape.

​In the southern side, the odd salt exploitation (belonging to Rio Maior area), 200 meters above sea level, still confuses the locals.

Back to Turquel page
in Turquel
| Tags: Center area, To see