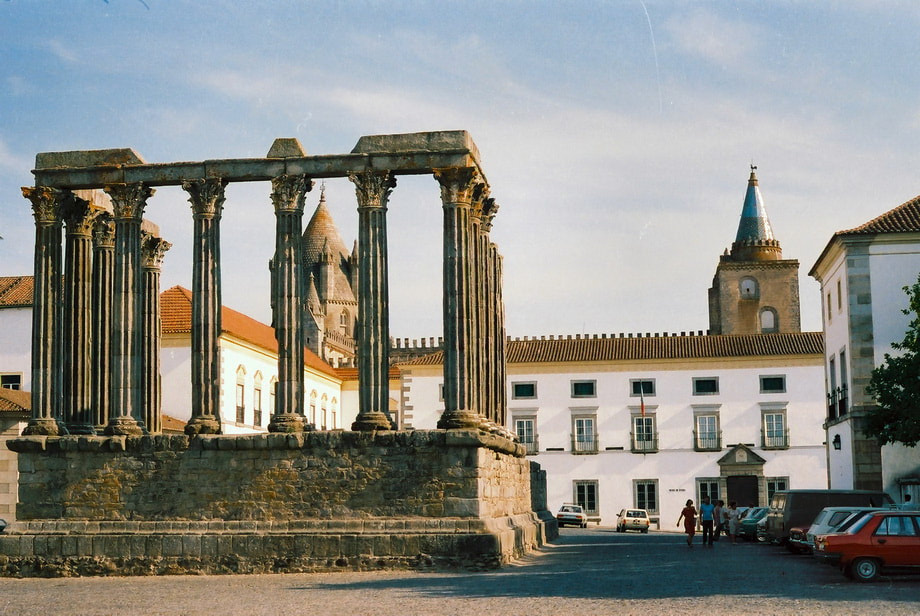 Évora – You must see

I have a debt to Évora: I think that it is a preciosity, have been there several times, and, in all of them, I left with the sensation of not allowing enough time to “live” it as it deserves.

Fortunately, the new roads are putting it “closer”, and promoting it as a good answer to the usual question: “Let’s go out! But where?”

The ex-libris of Évora this is one of the best preserved roman monuments in Portugal. The experts don’t accept the designation of “Diana temple” because they found that it was built in the first century and dedicated to the emperor, not to the goddess, but the people always called it that way, so… let’s accept the baptism.

​Anyway, the point is that this is just one of the several attractions that make Évora UNESCO heritage, and a must see.

Directions: In front of the Museum and Library

Just beside the Roman temple, this cathedral built between the 12th and 13th century and where Romanesque melts with Gothic, its easy to visit and surely deserves it.

From the 14th to the 18th centuries it received a few adding, with different styles, that is possible to verify and compare.

A modern garden close to Diana temple is a common meeting point, close to the best tourist attractions, and parking facilities, with some shades and sitting places.

The whole is pleasant, dominated by a few discreet statues, one of the so beautiful that forced me to read:

Francisco Barahona was a remarkable protector of the city, that, after his death in 1905 erected in his memory a statue in the centre of Diana garden. One hundred years later someone decided to move it to a more discreet place, but the population, who paid the monument reacted and, so far, it still remains with the evidence that was the people’s wish.

This conventual church was established during D. João II and D. Manuel reigns, to substitute the primitive one, coming from the foundation of the country.

Magnificent example of late Gothic with a multiplicity of influences, mainly from Spain and France, it includes also the famous bones chapel.
​
Address: Pr 1º de Maio​

The best of Baroque glows in this chapel of St. Francisco church.

​ Though the bones chapel is the main attraction of the church, it was unfair to pass by this one without a very special look.​

Maybe it would be advisable for the most impressionable people not to visit this chapel – you will be submerged under thousands of bones, in a gloomy but also harmonious image.

The bones are not only piled in the walls, they were used to artistically compose structures, rhythms and images with aesthetics concerns.

​Step a bit outside the path, and pay a little more attention to the church – it is wonderful, and one of the best places in Évora to appreciate Portuguese traditional tiles.

UNESCO world heritage, this church is one of the best examples of Portuguese Renaissance style.

In 1834 it was nationalized and transformed in military headquarters, accelerating its ruin.

Some altars were transferred elsewhere and the restoring works about 50 years ago saved the building, but with severe losses inside.

​It had a very interesting temporary display when we visited it

The main references of Évora to Portuguese are Diana temple and Giraldo square.

As a matter of fact I hardly understand the importance of this square, except that it is central and all the main attractions “happen” around it.

​City hall, a fountain, arcades and shopping places live in harmony at Alentejo pace. Well, all considered, it is a nice example of local character and behavior.

Started in 1483, the king’s palace, for long the best house in Portugal, was ruined and abandoned.

In the 19th century the architect Jose Cinatti decided to decorate the garden with fake ruins, that mixed with the real ones.

​In 1943 the only remaining part of the Palace was reconstructed, but with great differences from the original, however, the whole – buildings and garden – do deserve a visit.

Started in the 15th century, this palace grew to a big complex, occupying almost all the actual garden of S. Francisco. During the Spanish kings it lost importance, and started decaying, mainly when most of its area was returned to the monks, in 1612.

​With the extinction of the religious orders in 1834 the state recovered some of the areas, and the other were demolished to build a market.Nowadays, the only remains of the former palace are the ladies gallery, showing clearly the Manuelin style with Renaissance and Mudejar elements.

In the gardens around D. Manuel’s palace there’s a small statue of Vasco da Gama.

​It was offered by the population of Natal, in South Africa, to commemorate his 500th anniversary.​

While visiting King Manuel’s palace, you may be confused by some nice ruins, close to a “modern” building.

​The ruins are a fake, conceive by Architect José Cinatti to decorate the garden in the 19th century.

Outside Alconchel door, there’s a convent from the end of the 16th century, with a very interesting gilded altar, in the transition from Baroque to Rococo styles.

​The convent was acquired by the state to house a cemetery in the yard, and the building is now used to the music conservatory and some temporary exhibitions,

The walls of Évora castle are amidst the best preserved ones in Portugal.

Almost all the historic city is surrounded by these walls, with several doors and towers.

​A couple of doors were modified, but the other still keep their medieval characteristics.

Address: All around the UNESCO old town

Built during the 16th century to supply water to the city, this aqueduct is 9 Km long, still crossing the city and displaying a few protective towers.

Back to Évora page
in Évora
| Tags: Historic place, South area, To see