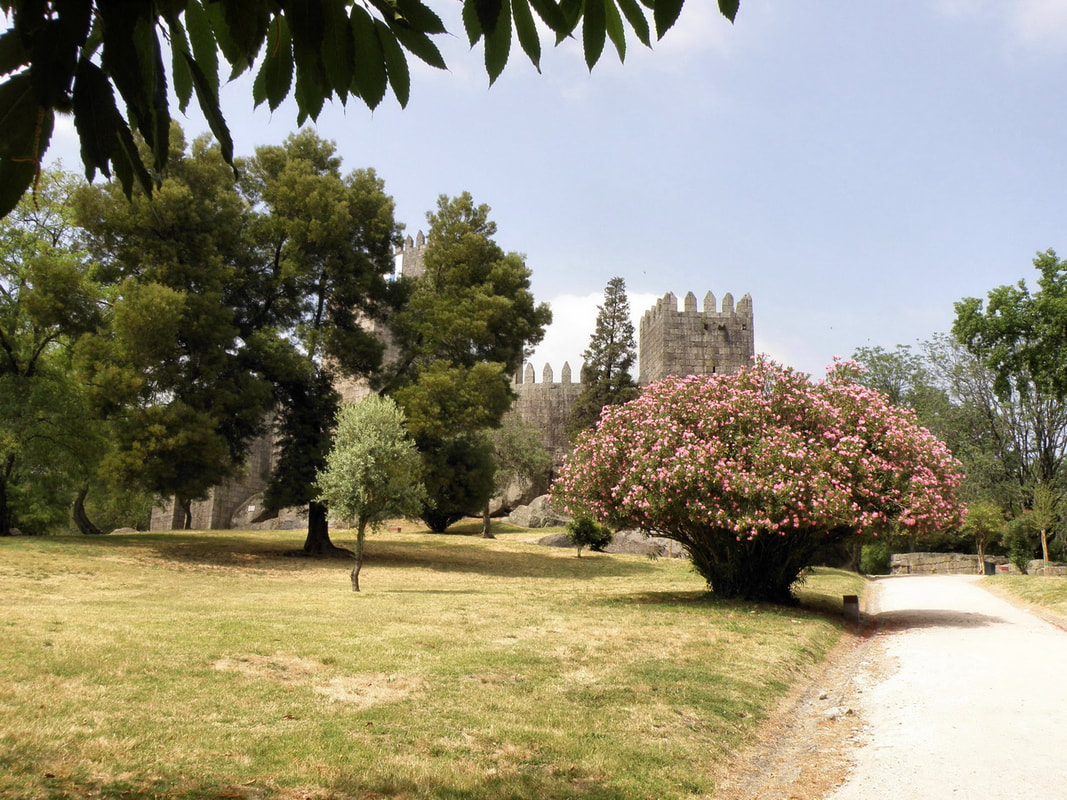 I had been in Guimarães only twice, so long ago and for a so short time that my memories were minimal.

Reading in VT I knew that I must return, and with the kids studying in Braga I can’t find any excuse.

For a couple of years it simply didn’t happen.

Just in case, a little help: Is it there any “El Corte Ingles” or similar in Guimarães?

Guimarães Shopping gave me one hour to walk a little across the city. Not bad, but I still need to return with time. Guimarães deserves it!

It’s nice to be attracted for a traditional building, with a nice yard, and verify in a closer look that is no more than… a cafe.

​Strolling in the historic center is a pleasant experience.

It’s a landmark to any Portuguese, since it was the cradle of our nationality. In the first visit I saw it fom outside, and it was all. A second visit! Once again without time to enter, but with enough time to take a decent picture. Or two…

The park surrounding the castle is a pleasant space, including three monuments, and the gardens of the palace.

​Not too big, it’s easy to walk, while watching the historic details.

Close to the castle there’s a palace built in the 14th in french style, as residence of Bragança family.

Abandoned for long time, suffering degradation and looting, it was recovered in 1933 by decision of Salazar, under strong controversy.

​Today it is a museum.

​St. Miguel church of the castle

Tradition says that this Romanic chapel, located by the castle, was the place where our first king – Afonso Henriques – was baptized.

The chapel was built in the 13th century, while the king was born in 1109.

​Maybe the sink that still is in the chapel was the real one, but… that’s up to you.

The main square in the historic centre is dominated by Salado monument, but it still shows some more historic buildings, as the church of “Nª Sª da Oliveira” and Domus Municipalis.

In 1340 was fought in Salado, near Tarifa, in Spain, the decisive battle where the christian kings of the Spanish kingdoms and Portugal defeated the moors from Granada and Morocco.

To celebrate this victory the Portuguese king Afonso IV erected this memorial.It’s quite uncommon, a non-religious memorial in the 14th century, and it’s nice to see that… it was preserved.

A building with arches between Oliveira and Santiago squares, in the historic center, is what remains of the old City Hall, started in the 14th century.

​Nowadays it is a museum dedicated to naif painting.

Adjacent to Oliveira square (you just have to pass under the arches) this wonderful square is the best place to appreciate the traditional architecture of the city.

​The balconies are lovely, and the esplanades, though out of context, don’t spoil the general look, being very useful to tourists.

Maybe the most beautiful street in Guimarães, this narrow street displays many beautiful houses and palaces.

It was one of the first streets of the city, already used in the 12th century

The so called Republica do Brasil square is a wide and well gardened avenue, stretching from the entrance of the old town to the outstanding Passos church.

Locally known as St Gualter church, this elegant church is located topping a beautiful garden, close to the historic centre.

It was built in the 18th century, with the two high spires added in the middle of the 19th.

Located in Martins Sarmento square, this old convent is now used by the nuns of “Religiosas do Amor de Deus” as a home for girls.

The church has a Baroque facade, and, inside, is covered with tiles (they say… I couldn’t enter).

A small but nice garden, facing Carmo church and flanked by other interesting palaces, is decorated with a fountain from the 17th century.

Built in the 17th century as a convent, this monument suffered in the 19th serious transformations, to be used as an hospital.

​With a great mixture of styles, the original church and cloisters still stand.

One of the most important buildings of Guimarães, St Clara Convent, built in the 16th century, is now used as City Hall, with the municipal archive occupying the former chapel.

​The magnificent gilded elements were transferred to Alberto Sampaio museum.

Known as Misericordia square when it was built (close to the church with the same name), at the end of the 17Th century, this square didn’t change much with time, despite the adding of some modern details, as the granite fountain built in 1820.

Since the 15Th century most Portuguese cities have their “misericórdia” a religious organization dedicated to help poor and sick people.

In Guimarães there’s a funny coincidence – Portugal was born in Guimarães, lost the independence to Spanish in 1580, and recovered it in 1640, the year when Misericórdia church was finished.

​With the building classified as a national monument, that doesn’t affect the organization, that keeps working with the same objectives of almost 500 years ago.

Forget the church – I wrote about it in another tip.

The important detail is the church in the horizon, atop the hill.

I didn’t go there – it is a good pretext for a new visit – but I know that it has great views over the city, a sanctuary, and it is accessible by a ferry cable.

​Yes… I left it for the next visit!

Back to Guimarães page
in Guimarães
| Tags: North area, To see