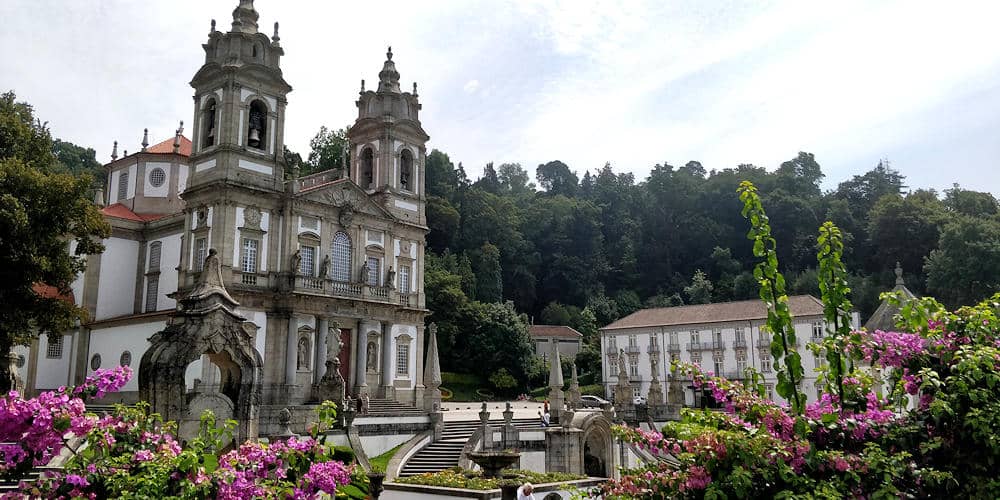 A common expression in Portuguese language may be translated “… it is older than the cathedral of Braga”.

What you may visit is, nowadays, not exactly something of the older references in Portuguese culture, but a complex of old and very old chapels, each one with its own history.

​Started in the 11th century is a landmark in Portuguese cultural history, and houses a rich religious treasure, with a separated visit.

All the information is available in:

Right in the centre of city, this temple comes from the 12th century.

​Several times rebuilt (the last one in the 19th century) it lost most of its original elements, but still deserves to be seen.

A nice garden in the centre of Braga, close to the medieval Archbishop’s Palace, is dedicated to this saint, whose statue tops the central fountain, dating from the 17th century.

More than 90% of the castles, stand in a high hill, easy to see from distance.

That was not the case of Braga, where the castle almost disappeared engulfed by construction.

​The main tower, that was probably built in the beginning of the 14th century, is all that lasts today, and, to find it, you may search Castelo street, in the centre of town.

Though many attractions ob Braga are spread in and out of town, a stroll in the lively city centre is mandatory.

History and tradition are present in each street or square.

One of the largest avenues in Braga, this is the main axis of the historical centre.

​Coming from the 16th century, it was being enlarged and re-baptized, until its actual look and name.

It is always nice to rediscover Bom Jesus. By day or by night, it is a lively place, where one thing is now missing: the famous “canudo” used to see Braga from the distance. ​

Built in the transition from the 18th to the 19th centuries, this big church was an ambitious project to integrate several popular initiatives started in 1629 with a chapel.

Included in the most visited complex of Braga – the shrine of Bom Jesus do Monte – the staircase is a wonderful piece of art, full of symbolism and precious details. Descending in a zigzag, each landing is decorated with chapels and fountains, all of them with a different theme.

​According to the place where you have parked, you may plan your descent by foot, using the old water-moving funicular (the oldest in Iberia, but still safe and working) in your way up, or to do it in reverse order.

More than a sanctuary, this complex in a mountain overlooking the city, is Braga landmark.
This gem of Portuguese Baroque surrounded by pleasant gardens, is the right place to “ver Braga por um canudo” (locals will explain you the meaning of this popular phrase), and spend a couple of relaxing hours.

Close to Bom Jesus, another sanctuary, built in the 19th century, stands in the hills overlooking Braga.

Though missing the garden and the great views over town, Sameiro is an important pilgrimage place, and interesting to visit.

Many years later I returned there… by night.

​A different perspective, a calm stroll in a hot night, overlooking the city.

It’s a beautiful building from the 18th century, with good tiles inside.

​Without the visibility and attraction of Bom Jesus and Sameiro, this church is generally considered the third element in the sanctuaries tour in the outskirts of Braga.

Maybe I should post this tip under Briteiros, but this village has nothing else remarkable, and the “Citânia” happens to be outside it.

So, I think it may be included in Braga (or Guimarães), as something a little more distant, but easy to include in the mandatory trip to Bom Jesus and Sameiro.Citânia de Briteiros is an archaeological site from the iron age, with Celtic and roman adding. Two original houses were rebuilt.

Signposted in the ways to the sanctuaries.

Church from the 16th century rebuilt in the 19th

Church from the 18th century

Sober church from the 17th century

Soccer stadium famous due to its special integration in the landscape

Strolling through the streets of Braga, a store caught my attention. I’ve known for a long time about the existence of a typical Braga viola – the “bragueza” – and I was curious to look for it. Unsuccessfully! With so much variety, and without wanting to bother the seller because I didn’t intend to buy, who would be able to identify it?

Built in 1915, the circus theatre occupied (and continues to occupy) a central space in Braga’s cultural planning. After extensive restoration work at the end of the century, the building was acquired and started to be managed by the municipality.

The longest avenue in the city is also the most beautiful. Located right in the center, it has a wide commercial coverage, and protected circulation for pedestrians.

Back to Braga page
in Braga
| Tags: North area, To see