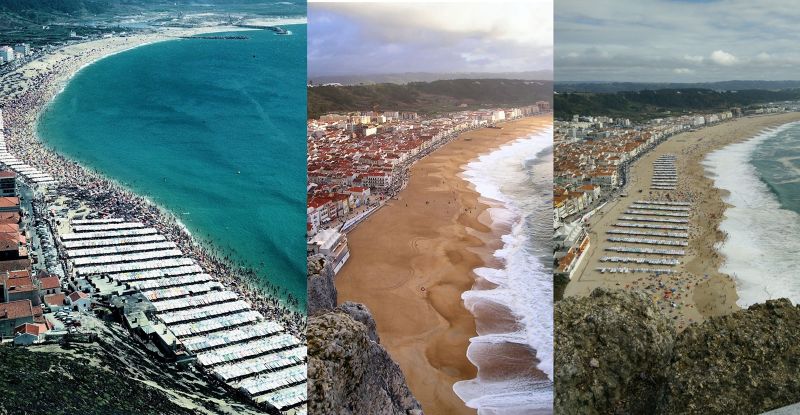 Until recently we, the lovers of Nazaré, were fearing its future, with the stripe of sand narrowing year after year, with the strong surf menacing its use and even the front houses.

Recently things seem to be reversed, and it was a relief and pleasure to confirm, last Sunday, the return to the size of the good old days.

Funny to compare the beach in April and August. What a difference!

And the basket of fish was replaced by the next one, until the end of that day’s catch.

Now, the “Lota” is closed, and that show is not available anymore, but the place was preserved, and is now used as a cultural center.

I saw books and computers around, but forgive me, I only really saw those steps where for decades beat the hearts of the people, and started the spreading of fresh fish to the area.

​At the door, a woman looks at the sea and waits, but to make entire justice to the women of Nazaré, a couple more female figures should be added running with baskets on their heads to the markets.

The traditional social organization of Nazaré reserves to women a fundamental role: while the men are at the sea, women rule life, taking care not only of the house – traditional woman’s role – but also of business. The “peixeira” (fishing seller) became not only a profession, but a status. And it’s really funny to appreciate the “peixeira”‘s independence and strength in everything, even in games. Things are fading, but when holidays provide free time, the happiness of their meeting with the roots is a special show.

Celestino Graça was a great man from Santarém. He launched a big event, that keeps celebrating his memory many years after his death – The National Agriculture Exhibition.

One of the highlights (for those who know nothing about agriculture as me) was the International Folklore Festival, gathering groups from all the world, sometimes with great disputes with the dictatorship controls. I had the opportunity to cooperate with his organization, and to know him from short distance.

One day, we were in Caldas da Rainha in a performance with some groups that we took there from Santarém, when the director of the best group of Nazaré – Tá-mar – also performing, announced the premiere of their 9th dance.

(A parenthesis to explain that Nazaré had a very interesting folklore, absolutely different from any other in Portugal, but composed by only 8 dances – 7 “viras” and a “corridinho”, what stops local groups from performing more than 15 minutes).

The dance started, and immediately, from the audience, a voice sounded, loud and clearly:

It was Mr Graça.

I approached him, trying to calm him down, and asking him what happened.

​Still furious, he pointed the dancers and continued:

​”Don’t you see? He putted the women dancing backwards! This is an outrage! The woman of Nazaré is the only in Portugal that always dances forward. The woman of Nazaré never recedes before man! She puts the fish upon her head and runs to Alcobaça, Valado, Caldas da Rainha, anywhere, to sell it. “Peixeira’s life is lived forward, the dance always respected it, and that must preserved.”

Many years later I saw Tá-mar performing, curious to see if they kept that 9th dance or not. Well… they did!

​But the women danced forward. Mr Afonso (the director) also respected Mr Graça, and also learned from him!

The witches of Nazaré

​Yo no creo en las brujas…

​Once upon a time, when the witches still rode their brooms, I took my girlfriend to Nazaré, in a nice rough winter.

Walking by the seaside, she almost got wet, by a stronger wave, and I didn’t fail the photo, capturing the moment.

Later on, while developing the photo, the witches showed their power, and a face appeared smiling from the water at Fernanda’s feet.

Cautiously, I advanced to the second picture, an innocent sunset, and… god!

Flowers, popping from the clouds?

It was too much.

​What could I expect from the third one?

Fisherman not fishing as usual, people searching the witches in all directions, but… nothing, I said.

We had to think.

The explanation came afterwards, as common as we could expect.

The paper used to print the two first pictures had already been exposed, but not developed.

The smiling face and the flowers belong to an unknown bride, that will never guess what happened.

You say: everything natural and clearly explained.

Of course, but look at the perfect position of both the strange elements.