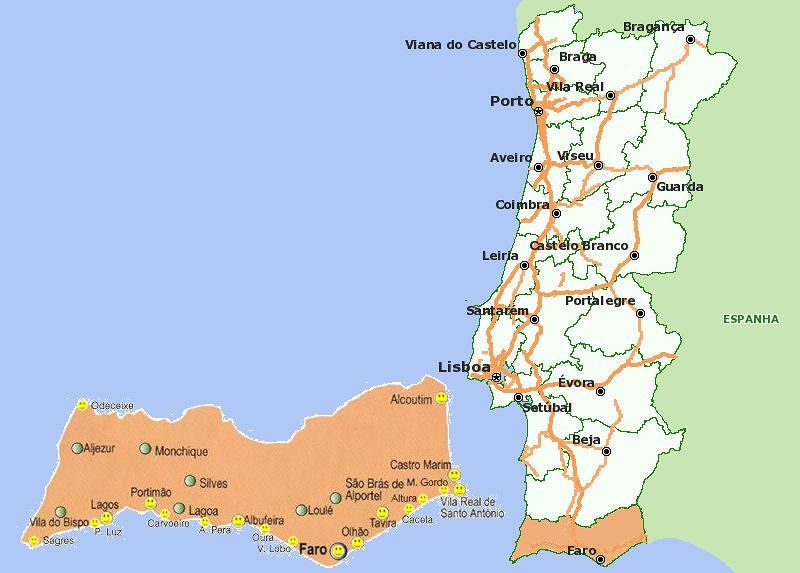 My favorite destinations in Algarve:

The area west of Lagos is… foreigner land.

This means that we, Portuguese prefer to go east of Lagos.

Between Lagos and Sagres, the main vacation area is Praia da Luz. English and Nordic people do have here the needed sun, in a not so expensive nor crowded ambiance. But the colder water (1-2º less than in the east), the more windy weather and higher surf don’t attract us.

​As a matter of fact, we love to be abroad, but… in the other countries.

More than 80% of the Portuguese elect Algarve as their top destination in weekend, specially in the long weekends allowed by holidays at the beginning or end of the week. Then, the roads become congested, hotels get full and prices rise. But there’s always a solution for everyone, and a diversity of options – beach, of course, but also history, gastronomy, wild places and lively nightlife. The only indispensable thing is… sun. But he uses to be there.

Algarve water uses to be 2 or 3 degrees warmer than the western coast, and that makes all the difference. From hotels to camping, from children to senior people, couples or singles, everybody finds easily their own program in Algarve (even those who use the sea as a pretext to go there, but end getting no time or mood to go there).Western area (barlavento) uses to have predominance of foreigners, eastern coast (sotavento) has more Portuguese. But all the Algarve is a floating multicultural population where sun is business.

I spent almost 20 years without going to Albufeira.

Once “my capital” of Algarve, the boom of construction spoilt the traditional fishing village that I knew, replaced by… a forest of concrete and cars.

I went there some weeks ago, and, prepared to the worst, I was not shocked. It’s heavy commerce by the seaside, as expected, copying the Spanish mass lodging and catering patterns, but… Algarve is still there.

​The beaches keep wide and clean, the sun shines, the fish is fresh, local cuisine was preserved and enhanced, so, if this suits your plans, Albufeira may be your place.

In the old days, this nice village perched in the hills was the first look of Algarve for all those who travelled to the sun. With the opening of the highway, it turned out of the way, missed inland.

For more than 20 years I forgot it, until I saw an old picture.

How will it be today, with desertification growing around it? Really out of the beaten path, it is something different to see in the way, if travelling with time.

​I will not forget!

I stayed in Altura for a week 20 years ago.

I went back there last month, and… couldn’t recognize it.

I mean, the only thing that I remembered was the hotel that we used, the only high building in several kilometers of coast.

I’ve been there again – ​Big construction (with wiser criteria than commonly seen in Algarve) new roads and streets, and a lively place. Altura is a beach that I may consider in future vacations.

Out of the main touristy area, this small village by the sea has invested in serious recuperation work, enhancing its traditional look.

​It is not comfortable to reach the beach, but the views are great. You may see my Cacela page.

For wild places lovers, the western coast immediately north of S. Vicente cape is a paradise.

Fabulous landscape, with secluded or wide sandy beaches, broken rocks evidencing millions of years of geological history, a preserved fauna, all gathers to make the weekend or day trip a very relaxing and heady day.

​Its only problem is that, getting there means car or… very long trekking.

The capital of Algarve and its big city, Faro is not the best place to enjoy the beach – the laguna of Ria Formosa puts the sea several kilometers away.

However, as the biggest city it is a lively place, close to several good beaches, with the strange coincidence of having one of the most wild and empty beaches, in the island of Faro.

Of course, several points in the island have the usual big amount of people (mainly by the bridge and the camping, but, stretching for several kilometers it is not difficult to find a wide and empty spot.

The highest point of Algarve is a great idea for a short trip in the wild, far from the sea.

Largely promoted by the pink magazines, this beach didn’t convince me.

​Very wide beach, distant from the densely constructed area, it has nothing important to challenge its neighbors Monte Gordo or Altura except… some pink business

This town at very short distance from Faro is in a second line of touristy destinations, because its good beaches are not very easy to reach, some of them needing a boat. However, Olhão deserves three special references:

– It’s the best place to watch the typical roofs of Algarve, in a wise respect to the local traditions.

​- Fish is generally sold in the market much cheaper than in Faro, largely paying the trip if you are cooking at home.

– If you want savage and lonely beaches, you can’t find better elsewhere.

Included in Albufeira broad area, this is one of my favorite beaches in Algarve.

I spent there a good week many years ago, and in my recent visit I kept enjoying the place – the tremendous construction in the area didn’t spoil too much this special place, at least by the sea.

​More than 20 years later I was back to Oura, and I enjoyed what I saw.

​Algarve was spoilt by heavy construction, and Oura is no exception, but the beach keeps the beauty that makes it one of my favorites in the area.

Backing the imposing beach of Praia da Rocha, Portimão is the second city of Algarve, and one of the most famous places of Portugal to eat sardines.

The natural harbor in the mouth of Arade are full of fishing and recreational boats, being the main departure point to the trips along the coast, that you shouldn’t miss.

Rocha is the most famous beach (and the most accessible), but Vau, Alvor or Ferragudo are also good options.

​The area west of Lagos is… foreigner land.

This means that we, Portuguese prefer to go east of Lagos.

Between Lagos and Sagres, the main vacation area is Praia da Luz. English and Nordic people do have here the needed sun, in a not so expensive nor crowded ambiance. But the colder water (1-2º less than in the east), the more windy weather and higher surf don’t attract us.

​As a matter of fact, we love to be abroad, but… in the other countries.

The most historic place in Algarve, Sagres is a mandatory visit.
Don’t expect much, except the cultural references, and the dramatic landscapes.

There are a few beaches secluded by the abrupt cliffs, but the water is colder than eastbound, and the sea may also be rougher than elsewhere.

One of the most historic places in Algarve is one of the least known by the Portuguese, included… me. Beach is the common destination and only foreigners like to travel inland watching the country. It’s an error that I will correct.

​This year I stayed in the eastern side of Algarve, and saw something there (Tavira and Cacela Velha, for instance). Next time in the central or western side I will leave some time to Silves.

Most Portuguese skip Tavira. When they go to Algarve the essential is… sea, and Tavira is distant enough from the sea to become a secondary destination. When we “are” in Algarve, and decide to leave the sea, for variation, Tavira is too close to the sea to be the alternative, and we prefer to go inland.

​That’s why Tavira is mainly for foreigner eyes, more interested in the contact with the whole and real Algarve, and, for that, Tavira is one of the best solutions.

Tavira is also the best point to reach lone and remote beaches. Always needing a boat, those who hate crowds may find from Tavira the best wild and hard to reach beaches of Portugal

One of the most exclusive places of Algarve, Vale do Lobo is something that… I don’t like. It is exclusive because it is expensive, and it is expensive only to be exclusive.
Maybe I was unlucky, but all my few experiences there were negative. I didn’t swim, but the beach didn’t attract me, and I only used restaurants, and bars for the night.

All expensive, without any reason – the quality ranged from bad to average, the service was slow and unkind, though professional, and the small unmerited tip was collected with disdain.

​No, Vale do Lobo is not MY Algarve

Back to Algarve page
in Algarve, Whole area
| Tags: South area, To see