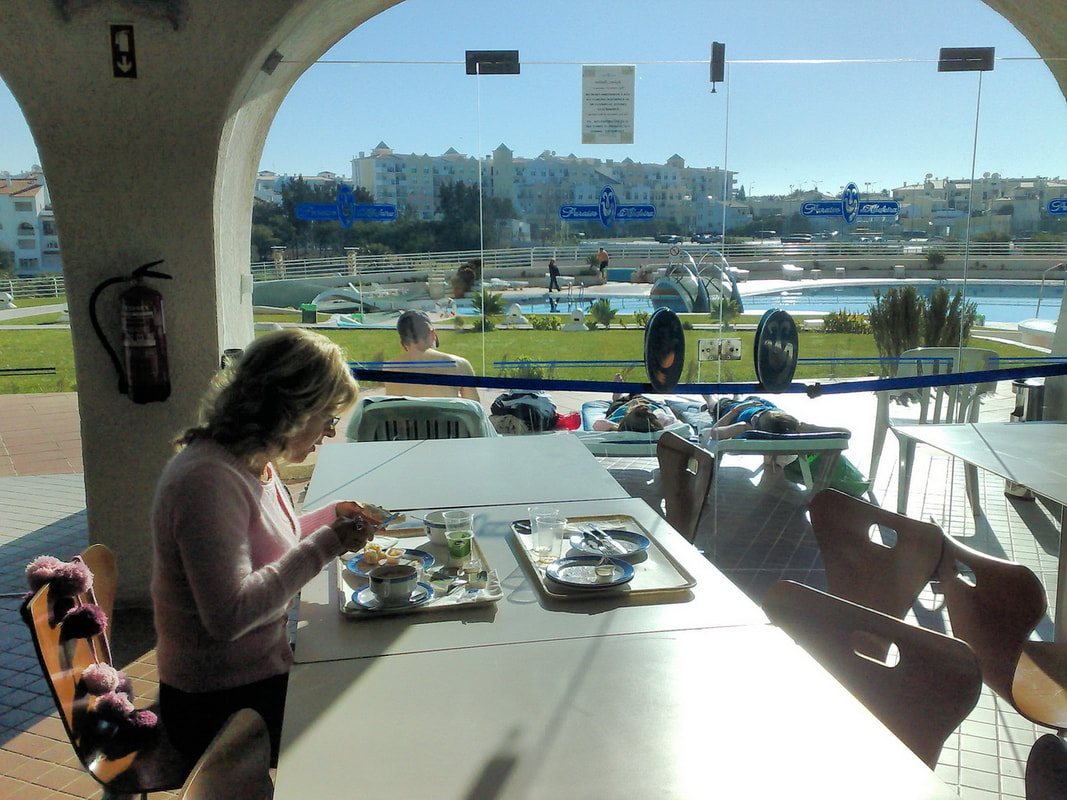 I stayed at this hotel of Albufeira for two nights, to participate in their New Year’s Eve party.

The hotel is good, but, perhaps due to the confusion inherent to the circumstance, the service was a little confused, especially at breakfast.

For my taste it is too far from the beach, which means that I could go back there but, like this time, without the beach as a goal.

I saw this hotel in January, and was fascinated by its location. I took note, and in the first opportunity decided to book it.

Before going I read all that I found about it, and it frightened me. So many terrible things…

The truth in detail:

The location is good: though built in the silly maze of Areias de São João, once found the way, the access is not bad, parking always possible (in June, remember!), and the sea very near.

The hotel is mainly french speaking, and, at the time we were there, full of mainly senior people.

​No problem for us, used to be abroad in our own country when visiting Algarve, and speaking French as badly as English. (Fernanda was sick, and that stopped us from joining the dancing group in the lobby. It was a pity, because, used to be grand daddies in our dancing group, we would be junior in that team!)

The apartments were OK, with a good balcony with views to… the bushes. The big problem was that, as usual, we got the last one in the line, and moving along the stupid corridor, with 30 steps up and 32 down to brake the monotony, was boring (and tiring with luggage).

I saw a tiny TV set upon the wardrobe and an air-conditioning device in the wall, but had no idea if they worked or not, because… there was no control. Someone told me that I should collect them in the reception, but, God, making twice the terrible corridor to get something that they could easily deliver when checking in? Is it forbidden to think, or no respect for clients?

Breakfast was another criticized aspect of the hotel: it was not so bad as expected, except the so called “orange juice”, a real shame. Not good, indeed, but I had worse for more money!

The beach is wide, with thin white sand, really attractive. I didn’t swim, but could notice some hidden rocks in the water, advising a good care choosing the area to enter it. A very good point is the short distance and the ease to walk along the beach to the centre of Albufeira. That’s it: location is excellent!

What can I say? It is Algarve, in its main “quality”: price ahead of service. Would I return? Maybe! The alternatives in first line of the sea are not many, and use to cost more.

I didn’t stay there, but a couple of Canadian friends did. We visited them at night, and spent a great time listening to popular music played… exactly as it should be in a hotel lobby.

​Our friends enjoyed the hotel, and, if we go back to Albufeira accepting to stay far from the sea, this will be one of the first options.

Back to Albufeira page
in Albufeira
| Tags: Hotels, South area