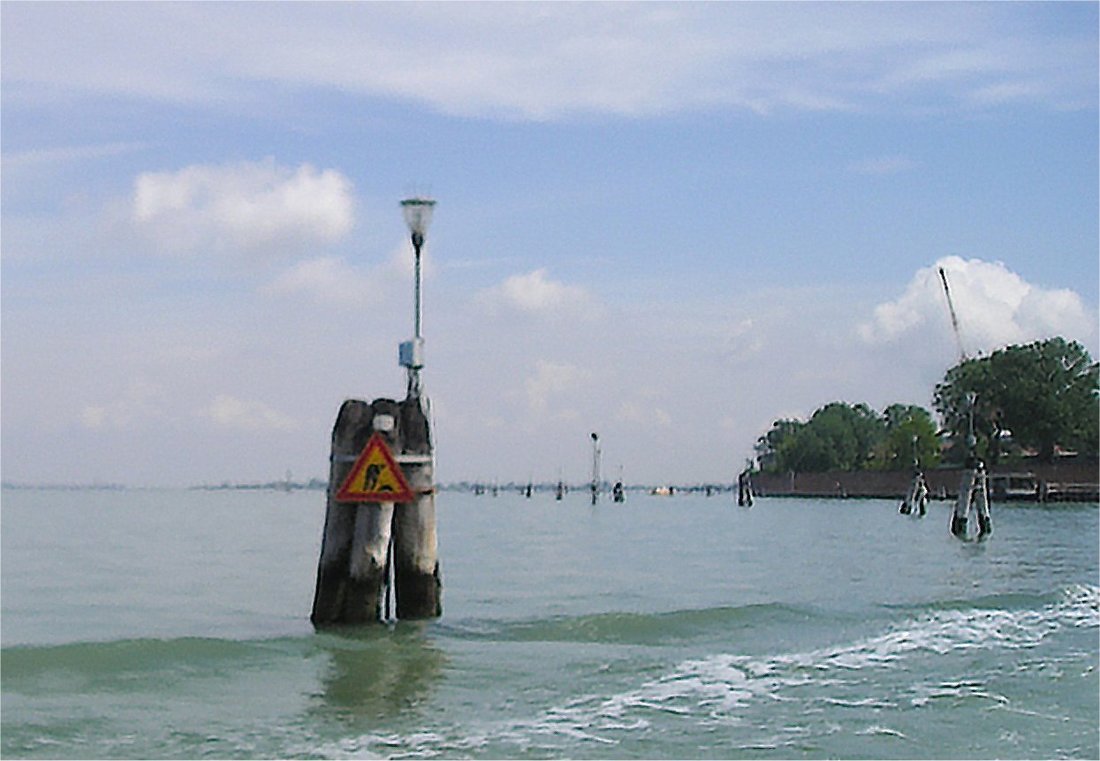 Venice is a marvelous city with the additional detail of water replacing tarmac.

Life in the water flows naturally  inviting us to face surprising details.

It’s funny to see weddings (and funerals) flowing in the water as common roads.

​It’s funny to see people parking boats at their doors.

We quickly get acquainted to waterways as the main displacement mean, but… workers on water? Where were them? Diving?

​It was Venice, and far from Carnival.

We quickly get acquainted to waterways as the main displacement mean, but… workers on water? Where were them? Diving?

​It was Venice, and far from Carnival.

In my first visit to Venice, I was impressed by… a funeral.

A boat with a coffin in the middle, surrounded by flowers, crossed the canal.

However, it’s strange, the way the water separates things, and at the same time joins them, in a different way.

​No visit to Venice is complete without a trip in Grand canal.

​All the ways lead to S. Marco

Summer or winter, under the sun or heavy rain, even when flooded by “aqua alta”, this splendid square is always filled with people and pigeons.

The harmony of the buildings give intimacy to the large square, and the monuments share the space with heavy commerce. It allows a strong sensation of dipping in history, only broke by the noise and movements of the crowds.

Located in the square where everybody goes, the cathedral is, of course, a must see. A fabulous example of byzantine art, it deserves a detailed observation either of its beautiful exterior either of its rich interior. Permanently shaded and crowded, the observation is not easy, but its possible to admire the rich combination of stones (and gold) that makes each square inch a piece of art.

Right in S. Marco’s square, this palace, together with the church, composes one of Venice’s most celebrated images. As a matter of fact, I’ve been in Venice at least 4 times, and never entered more than its yard.

It’s a question of priorities (and companies – changing company you have to rewind priorities), but I always leave Venice swearing: “Next time I DO have to enter”

One of Venice’s landmarks, this tower, almost 100 meters high, is a temptation.

From the top… Well, after 8 € and variable but generally long time in the line, you will find out that… it was not so good.

​The narrow windows are well protected and allow only a limited sectorial view in each direction. You may see the island’s location in the lagoon, and… roofs. Come down. Venice is very beautiful seen from the ground level. You could have spared time and money, didn’t you?

Rialto is mainly known by its bridge, that is not exactly a bridge: It’s a landmark, a commercial hub, a meeting point, and… yes, the most beautiful bridge over the Grand Canal.

Religious promises or thanks giving, are, in many occasions, the basic reason for some artistic monuments. Batalha, where I got married is my closer example, and Santa Maria della Salute is another one. In 1630, facing the plague, the Venetian Senate promised to build a church in honor of the Virgin Mary to stop the plague . The plague was really stopped, and the Venetian authorities honored their promise having built the church in Dorsoduro, by the Grand Canal. Baldassare Longhena, the architect, conceived a octagonal basilica, combining elements of Venetian Byzantine architecture with domes inspired by St. Peter’s in Rome. The sights from the Grand Canal are wonderful, and visiting it’s easy and free, with a vaporetto stop just in face of it.

The “Chiesa degli Scalzi”, or Church of the Barefoot Ones, is named after the Barefoot Carmelites monks who have been in this church for more than three centuries.

​Built between 1660 and the early 18th Century, the church, facing the grand canal, stands as one of Venice’s most beautifully and ornately designed churches, with a facade designed by Giuseppe Sardi.

Address: Cannaregio, near the train station

The quay east of San Marco is a quiet and open space to walk, far from the crowds, with the gorgeous views of St Giorgio Magiore, Salute and Giudeca in the opposite islands.

Statues and palaces line the walkway that ends near Arsenale and St Helen’s island.

Venice is a city on the water, but… how to get potable water?

A very ingenious system collected the rain across filters to large cisterns in the centre of the squares.

​The water was then drawn up in buckets, under severe hygienic control.

Nowadays the system has been abandoned, but the wells remain, most of them real pieces of art, and all contributing to “tell” the history of the city.

The neglected square and facade invited us to bypass this church.

We didn’t, and it was a good idea.

​Free entrance, but no photo allowed to register the rich paintings of Palma il Giovane and Padovanino.

You have to see them for yourself!

This is my favorite photogenic spot in Venice, till now.

​The shape and position of the canals, the location of churches and bridges, living boats, and the people, all merged to compose a wonderful spot in a zone where we were just passing by.

Though covered by flowers, in small vases, gardens seem to be a rarity, in Venice.

I remember the trees near Piazalle Roma, the city garden near Arsenal, and… only a few palaces show a small and shy garden.

​Technical problems to maintain them, or is this the consequence of the high prices of each square centimeter of land?

Turn north or south, east or west, and you will see… glass, but look closer: where does imagination lead us to?

What are the constraints of glass manufacturing?

​How do they manage to surprise you next time?

Because they will! While they can!

Go and have a look – it’s a wonderful activity, risking to disappear.

With all my professional life connected to glass, my expectations about Murano were very high.

That’s why I came back a little disappointed. I was aware of the industrial crises, but expected more from the museum.

Anyway, for those who had never been in Corning or seen Baccarat museum in Paris, it is worth the vaporetto trip.I went there again – crisis continues, but it is always an astonishment the imagination and technique used in glass manufacturing.

​A stop in the way to Murano

In my first visit to Venice I was surprised by a funeral: a boat descending the Grand Canal, with a coffin in its top, surrounded by flowers. An odd show!

Later on I found that it seems to be, really, the only way to make funerals: the cemetery is located in a island, half way from Murano, and boat is the only transport to reach it.

​I never saw it again which means that there is not much people living in Venice, or that they are resistant and healthy. I choose this second option.

I know the rules: Never, but never, make a final idea of a beach in winter.

So, this was only a first impression: thin but dark sand, wide beaches and empty restaurants and stalls.

I shouldn’t have gone to Lido in winter! It left me with no intention to return in summer, and I KNOW that in summer, it will be totally different.

Two weeks later I had a dinner with a couple of Canadian friends in Nazaré. Winter in Nazaré! What a difference… But I will check Lido in summer!

I didn’t return to Lido (yet), but I spent a week in summer in a beach close to it, being almost its continuation – Lignano Sabbiadoro. It’s different… as expected, and as I describe in Lignano page.

After seeing the similarities between Venice and Murano, I was expecting something alike in Lido.

Lido is a modern continental neighborhood, more Mestre than Venice.

Even the unique monument I could see in the island was modern and absolutely different from Venice.

​Built after WW1, this temple is clearly seen when we approach in the vaporetto.

Back to Venice page
in Venice
| Tags: To see