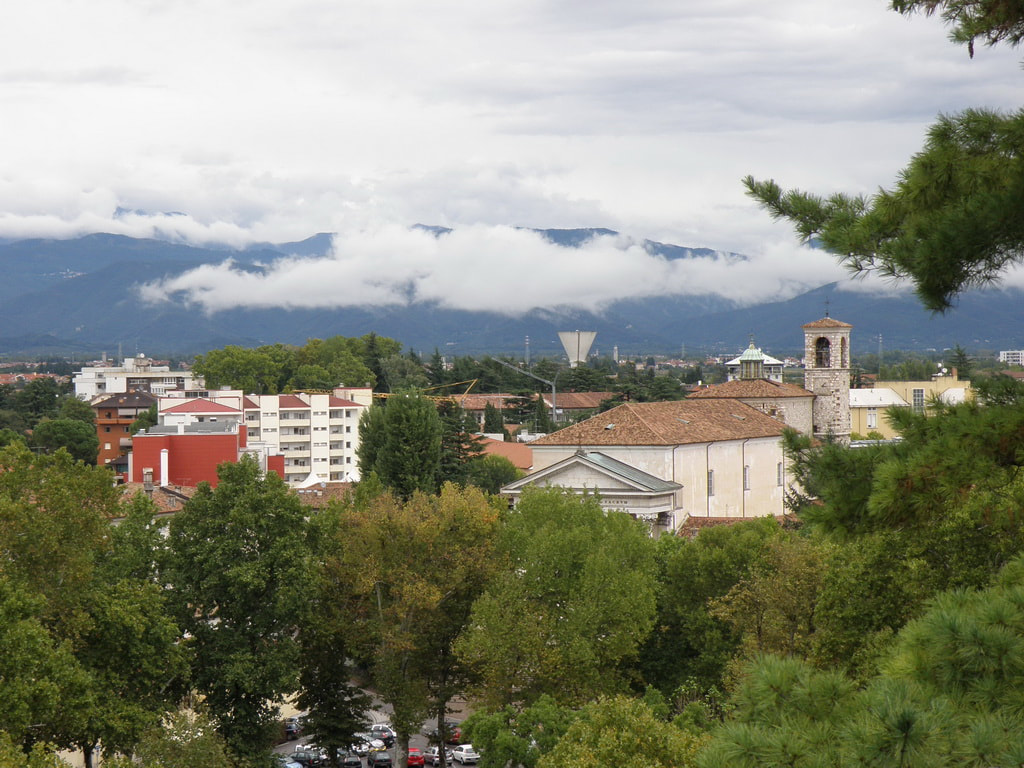 I visited Udine without planning.

We were in Lignano Sabbiadoro, with a few friends, and decided to go elsewhere. Venice was known, Udine was the natural alternative.

​It was a nice day, in a nice city, even with the sad colours of a rainy day.

Facing Loggia del Lionello, across the square, the Loggia of S. Giovanni was built in 1533, including a temple dedicated to the saint, but latter replaced by another one dedicated to the fallen. The most remarkable detail is the clock tower, in Venetian style.

The most beautiful monument in Udine is the town hall, in Venetian style, inspired in Venice’s Doge’s Palace.

Also called the Loggia del Lionello, it has an open space, with striped pink and white walls, and a small display on antiquities.

​It was built in to the fifteenth century, and partially rebuilt after a fire in 1876.

Udine was ruled by Venice for many centuries, and the Venetian influence is particularly evident in the central square – Piazza della Libertà.

Surrounding it there’s Udine’s town hall, also called the Loggia del Lionello, opposite to it the Loggia di San Giovanni is another arcade, with a clock tower resembling the one in Venice’s Piazza San Marco.

​The square is also decorated with a few statues, including the Venetian Lion of St. Mark.

Piazza Libertá topped with a tower very similar to the one in S. Marco square, in Venice, displays several statues and a nice fountain.

The column and the lion of S. Marco could be expected, the statues of Justice and peace are understandable, but was is Hercules doing there?

And why do they call him Florean?

​Don’t ask me, I only know that he is really big!

One of the mot beautiful constructions in Udine is the complex of paths and staircase that lead to the castle.

​Built in 1487 by order of Tommaso Lippomano, the Governor from Venice, it is a delicate example of venetian style.

The so called castle of Udine is a palace built atop the central hill, in the location of an old fortress destroyed by an earthquake in 1511.

Built a few years later it was again damaged by a recent earthquake, in 1976 and rebuilt.

​It is today, the city’s museum, with a yard with the best views of the city.

The castle was built at the time of the Aquileia bishops in the center of the town, and was replaced in the 16th century by a more majestic building, damaged in the 1976 earthquake and underwent long restoration works.

It was already, since 1906, a museum, and after reconstruction, it hosts the Civic Museum and Galleries of Ancient and Modern art, with famous friulian and venetian artists such as Tiepolo or Caravaggio.

It was closed when we went there, and we could only see from outside a Pietà.

At the end of the access to the castle, there’s a second gate, between the castle and Santa Maria di Castelli church, with St. Marco’s lion on the top, and seeming much older than the more famous Bollani arch.

However, for a long time, I couldn’t read anything about it, but, with perseverance I got it:

​This arch, named Rimani, was located in via Portanuova and was moved to this location in 1902.

The Santa Maria di Castello, at the castle’s entrance, is the oldest of the city of Udine, seeming to have been built on a site of a previous one.

The actual structure in Romanesque style comes from the 12th century.

​Inside, the most remarkable details are the frescoes from the 13th century.

Udine’s cathedral, the Duomo, comes from 1335, with a big transformation in the 18th century.

The interior isn’t particularly interesting, but it has some 3D trompe l’oeil angels, and paintings from Tiepolo and other.

There are ancient stone carvings over the doorway.

​It has a museum but we didn’t enter.

Dominated by the church with the saint’s name, this square is now named Matteoti but also known as Piazza delle Erbe or Mercatonuovo, because it is the place for market of vegetables.

​ The square shows also a elegant fountain and a column with a statue of the virgin, both from the 15Th century.
​

Located in the square now named Piazza Matteotti but still called St Giacomo by locals, this is the oldest church in town (forgetting the reconstructed one in the castle).

Built in 1378, it was enlarged in the 16th century, when it received the actual facade, and in the 17th when the adjacent chapel was added.

The old fish market is a very beautiful building, so beautiful that they wisely decided to preserve it.

​Today it is an open space for photo exhibitions, either from the city’s collection either from other origins.

Outside the oldest walls of the castle and its moat, the first inhabitants built their houses, around this street, where in 1200 was created the first permanent market of the city.

​Today, a few shops give life to the street.

The Palazzo del Monte di Pietà, dates from the 17th Century, and was designed by Bartolomeo Rava from Milan.

It is located in Udine’s historic centre, with statues at each of its corners and large stone arches. It is a bank today, but inside, there’s an art gallery of regional artists from the 16th to the 20th Century.The best detail is a chapel that may be seen from outside.

​With a fresco painted by Giulio Quaglio the Younger (1668 – 1751), and the altar sculpted by Giuseppe Torretto it is a very beautiful example of Baroque art.

Built in 1295 as part of the city walls, the tower of Santa Maria, also called Porta Nova was reconstructed, housing today the City Museum.

Vincenzo Jopo library is the most important of Friuli, with more than 500.000 books, and occupying nine buildings, including this beautiful palace Bartolini, built in the 17Th century.

Once a Gothic church, built in the 14th century and transformed in the 18th, this building is nowadays an auditorium, housing temporary exhibitions.

The church of San Francesco is one of the oldest in Udine, today and only used for exhibitions and concerts. It seems to be the most beautiful church in Udine, with great frescoes inside.In 1934 some works of restoration demolished some elements from the 15th century, and in WW2 bombing forced a second restoration to the actual look, saving the frescoes.

This palace from the 16Th century, was a former residence that suffered several transformations along the centuries, losing much of its authenticity. What remains is occupied by the Bank of Italy.

Dominated by a palace built in th 16th century to Floriano Antonini, and several times transformed in the following centuries, this a large, nice, but strange square.Some roman ruins seem to dispute the square with a big and modern block looking like a bunker, that, by the time of our visit, was painted with protesting messages. With different reasons, I do protest also.

​1St of May square

The biggest square in Udine is an ugly place when seen as a whole, interesting when you go around it and look at the details.

Very wide and somewhat impersonal, it is surrounded by palaces and churches really nice.

A small ditch crosses Udine, composing a few corners of great beauty. It seems that in medieval times there were six ditches, only remaining three.

The building of this sanctuary, guarded by the Friars Servants of Mary, began in 1495 and ended in 1520, being renovated with subsequent expansion in 1730. The facade and exterior work were added years later. The church was declared a minor basilica in 1922.The chapel of Our Lady, rebuilt in 1769, has a Byzantine image of Our Lady of Grace of the fourteenth century, crowned in 1870 by decree of the Vatican. The other altars show several paintings of Tintoretto,

One of the most remarkable buildings surrounding 1St may square, is a complex that, it seems, belongs to an open school – Liceo Stellini.

The controlled river flowing around it compose some of the best romantic spots in Udine.

The oldest detail in this church seems to the door, built in 1518, while the Gothic style of the building comes from a restoration in the 17th century. The original fresco over the door was so damaged that couldn’t be recovered and was replaced about hundred years ago. The interior has a few interesting works from the 16th century to the 19th.

Located in Via dei Torriani, this small chapel with the name of the original owners the Manin family, has a wonderful Baroque interior, with sculpted panels and a coloured marble pavement. The domed ceiling is topped by a lantern.

The oldest entrance in town, dating from 1299, is called porta Manin or St Bartolomeo tower. The walls are gone, and even the tower has a somewhat modernized look, maybe by influence of the adjacent buildings