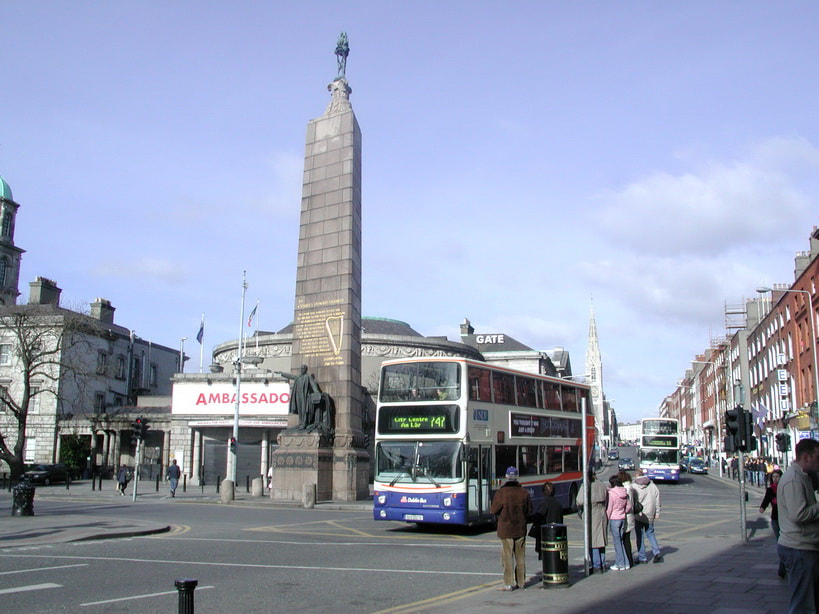 The Irish are a lively and communicative people, and help foreigners to feel well in their country. Maybe this is a risky opinion, constructed in a very short visit, but, it was what I felt there. Each side of the river has its own look and personality, but everywhere you may find reasons to stop and have a closer look. And the commercial area didn’t motivate only the women…

Said to exist since the XI century, the Christ church cathedral, has been restored in the XIX century, (with a whisky distiller’s money), showing today a Victorian aspect.

The heart of town

Music, beer and joy. No matter the ages, sex or culture, life pulses in Temple bar, where people converge naturally. It was funny, and the lunch at Oliver St John Gogarty was good, but I must admit that our best night and our best meal they both happened in different places, somewhere else in Dublin.

I can’t tell you about the studying quality in Trinity College, but the quiet ambiance calls to reflection and concentration.

The campus is well conceived and harmoniously balanced, and the library invites us in. Rather British, indeed!

The largest (and longest) avenue in Dublin has a long and rich history, since its creation in the 18th century.

After being neglected for some years, it was recently recovered, and shows today a wide and clean look, with several classical buildings and statues along its 500 meters.

Initially built in 1038, the cathedral suffered several transformations until the Victorian period when they decided to restore it following its medieval characteristics. Mixing some original details with pastiche, it keeps being a good example of medieval religious architecture.

Grafton street is the most commercial street of Dublin.

Closed to traffic, you may find there… the usual!

​All the great brands that are taking control of the world, and all locals and visitors in a constant parade.

Do you know who did we meet in Grafton street?

James Joyce, would you believe?

He didn’t accept any kind of conversation, but didn’t refuse a picture.

​Not bad, but I do prefer his words to his image.

I love Molly Malone! ​No, I’m not exactly talking about the lady. As a matter of fact, we really don’t know who she was – a fishmonger, a prostitute, or just a name.

I was talking about the song with her name, which is one of the best melodies to listen in front of a Guinness mug (I don’t drink beer, but in Dublin I forgot it, of course). Imagine my satisfaction when I met her in a street. She looks healthy, generous, and a music lover like me.

Address: We met her in Suffolk Street but it seems she is moving in 2017

Top of the top

Dublin is one of the places in the world with the liveliest nightlife.

Temple Bar is an area where the bars and restaurants are side by side, the choice becoming very difficult.

We wanted live music, and that narrows the options.

in Dublin
| Tags: To see