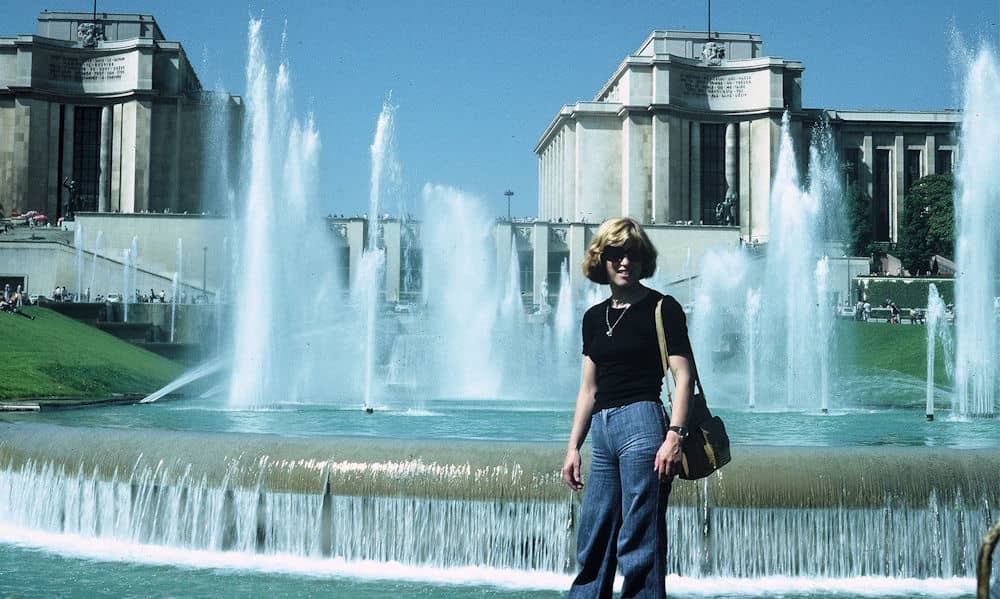 The Square to Walk Backwards

To start, one of my oldst and funniest memories of Paris:

​If you want a little bit of fun, just stop in the square facing Notre-Dâme and look at the people. There’s always someone walking backwards in the square.

The facade is so big that confuses the photographers, who try to frame it from the center of the square, and discovering the impossibility start to move backwards until… until the photographic point right at the bottom of the square.

​So, after looking and smiling, save your time, and go straight there. In my recent visit I noticed that the old fun is over – the new cameras have wider lenses and framing the facade is easier… closer.

This funny experience was lived in 1979, in the “pré-history” of photography.

Now with digital cameras, the angles have changed, and the fun is no more available to anyone.

One million times NO!

I went to the romantic square of Tertre and couldn’t believe what I saw: the artists, expelled from the square by a dense esplanade!

No! I can’t believe that the good old Tertre was killed! It was the effect of the rain! It only could be!

I hope!
​
I will never go there again in winter!

Place de la Concorde, one of the most beautiful places in Paris, is also the least photogenic of them all.

A wide place by the river, flanked by wonderful palaces, no matter from where you look at it, becomes a plantation of cars.

The geometry, the beautiful gardens, the sights of the several monuments that can be seen, close by, or several kilometers distant, all vanish behind the always rushing lines of cars.

​Unless you dedicate a special attention to details (and the obelisk invites you to), the square risks to be a discreet passage in your visit.

I use to say that the only city in Europe that challenges Lisbon’s light is Paris.

Tuileries, in summer, is one of the best places for that light to glow, and that’s precisely the reason why it becomes so depressive in winter, at least to who is expecting its colors and brightness.
​

Standing below the Arch of Triumph I was reading the many names of the battles won by Napoleon’s soldiers when I had a surprise: OPORTO.

This means our Porto, a city that calls herself “invicta”, which means never defeated. Where is the truth? I must go back to history and read it more carefully!

​In 1809, March 29th, the army of General Soult entered Porto without any significant military opposition, and attacked the civil population.

Trying to escape to the southern bank of Douro river, people used a precarious bridge made by boats that collapsed, killing more than 4000 civilians.

​Less than one month later, Portuguese and English armies fought back the French, that where obliged to leave Porto forever.

Everything is now explained: in Paris it’s celebrated March 1809. In Porto they celebrate from April till now. Everybody gets happy, and I celebrate the pretexts to build monuments like this one. (I think that there’s an arch missing in Porto)

It’s not so common as in other places, but beggars may appear in touristy areas.

​Will it be difficult to you to find out why did Victor Hugo come to my mind, when entering Notre-Dame?

​I prefer an umbrella

It’s not Pavlovian, but, while in Paris, I’m starting to associate Zara with rain: One day, it started raining while we were close to the Opera Garnier – Fernanda found immediately one Zara and entered, while I stayed almost two hours at the door waiting for the rain to stop.

It didn’t until the shop’s closing time, and we had to run back to the nearby hotel.

​Another day, we were in Montparnasse, and… rain again. No umbrella, but Fernanda found… (bravo! you guessed well!) another Zara. This time I entered praying to all the known and unknown saints to stop the rain. They did! My problem is that, now, I don’t know to which saint should I be grateful.

A man gets a map from Printemps;

Gets another one from Galeries La Fayette, and becomes ready to be dragged from one place to the other with 2763 stops in between by his shopaholic wife.

He tries to remember the places, their differences, but… no way.

The building is wonderful and it seems to sell everything, but in such a bustle even breathing is hard, and in a couple of weeks I will be back.

With the same stores, and thousands more, because this time we will stay a week. I promise that the 6 visits planned to these galleries will allow me to see, at last, the Invalides and Sainte Chapelle. Well, let’s not be optimist: at least one of them!

Hurrah! I DID see both, in my return to Paris. And the galleries, once more. Of course!

It’s not exactly a local custom, more an universal custom in a local flavor.

In all the Metro lines in the world it is common to see someone playing guitar or accordion or any other light instrument.

However, a complete camera orchestra… only in Paris!

Back to Paris page
in Paris
| Tags: Memories