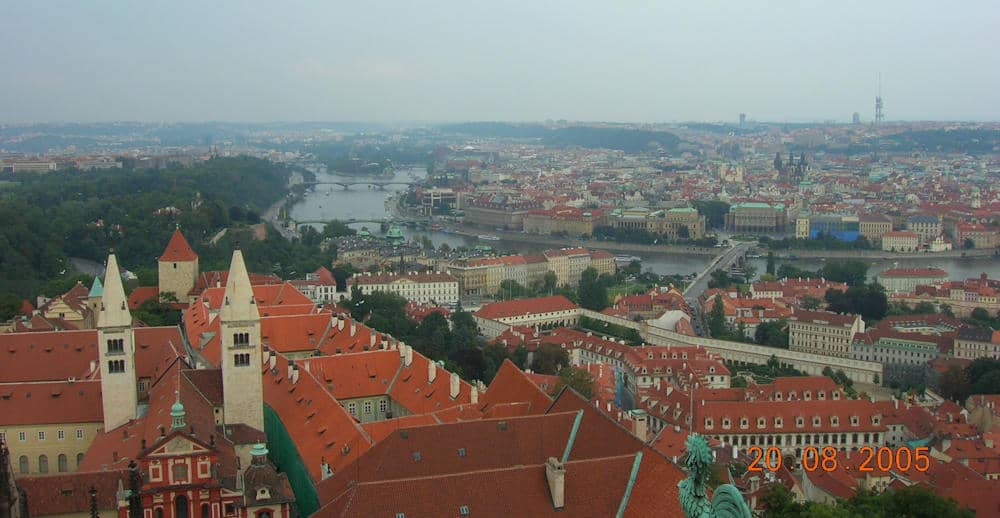 “Next time we will go to central Europe”. We say it almost each year, and, at the end, we finish somewhere else. That’s why I don’t know Austria, or Hungary as I would like. And I only know Prague because glass activity took me twice to Czech Republic. Bad luck, both times happened in winter, so, I kept from Prague the image of an extremely beautiful town, but a bit dark and cold.

Next time we will go to central Europe. In summer. It’s an easy city to visit, with a surprise behind each corner, and all the main attractions in a short distance. But if you want to enlarge your itinerary, public transports do work and are also easy to use.

Visiting the old town it’s easy, and a nice stroll. Everything is located around and near main square, one of the most beautiful squares in Europe. Jan Hus monuments occupies the centre, but around it there are many wonders, with evidence to the Astronomic Clock, the churches of St Nicholas and of Our Lady before Tyn, and old Town Hall Tower.

One century before Martin Luther, Jan Hus, the dean of Charles University in Prague started challenging the church, condemning the practices that originated protestant reform. He was convicted and burned as heretic, leading to a popular revolution – the Hussite war.

​Jan Hus became a national hero, and in the beginning of last century a monument was erected in the centre of the main square in Prague.

​Facing the church of Our Lady Before Tyn, that became the centre of the Hussite movement, this monument, though discreet in forms and proportions, becomes preeminent in the wide square.

Prague is one of the easiest cities to visit – the historical area is not big, the monuments come to your eyes in a regular cadence, and the general look of the old quarters is very appealing. Once a settlement surrounded by a moat, nothing remains from those medieval times. The actual place comes from the 12th century, when the square was a marketplace.

​The expansion of town in the 14th century eliminated the moat and protecting walls, but the historical buildings in Romanesque, baroque or Gothic styles added for centuries, enhanced its beauty, making it a mandatory visit in town. Furthermore, the public transport in central area is very efficient.

Located in main square, this wonderful white building is the most impressive of all. After centuries of religious disputes and wars that introduced several changes in its Baroque original style and decoration, the Czech Hussite movement took control of the church that since then is used both as a church and as a concert hall.

Knights of the Cross

This wonderful square, dominated by the Baroque church of St. Francis, is located by Vltava, close to Charles bridge.

​Opened in the 19Th century, the original Baroque style was preserved in most buildings, including the gallery of the Knights of the cross, and was embellished with a statue of St. Wenceslas and a monument honoring Charles IV.

A clever solution has been found to solve the space limitations of the national theatre: absolute preservation of the beautiful old building, and the construction at its side of a new one, totally different.

As a matter of fact, the ensemble does work. The dominating glass in the modern building turn it discrete, with reflections enhancing the beauty of its neighbour.

A perfect combination of classical and new structures. A pity, we didn’t enter it.

Prague lives around Vltava river, both banks showing beautiful buildings embracing the river. Not large enough to allow a great traffic it runs for more than 30 Km inside Prague, where we may see many of its 18 bridges

Don’t worry about location, accesses or anything else concerning this bridge. “All the roads lead to Rome” except here: all the streets and people seem to converge to this wonderful bridge, where statues mix with living artists. Built in the end of the 14th century, it was, until 1841 the only way to cross the Vltava river. Protected by towers at both ends, it is decorated with many statues.

Carlos Bridge is a wide and permanent art gallery. I’ve been there in winter, and even the negative temperatures didn’t dismiss the painters exposing their works. Several techniques several styles several prices. I didn’t buy, but a friend of mine brought a reasonable collection.

I only have been there once, at dusk, in a dark day, rushing down to dinner in town. Not enough time to appreciate it or to make good pictures, but time enough for a strong decision: “This is a place where I must come back”.

The so called castle of Prague is a very interesting quarter, with historic buildings and squares, where this cathedral assumes the most relevant position. Showing several styles, denouncing the many adding and recuperation, in its more than 600 years, this cathedral deserves much more time than the quick look that I could have. That’s one of the many reasons that make me wish to return to this lovely city.
Address: Katedrala sv. Vita, Vaclava a Vojtecha
Directions: Prague Castle

Half way between the castle and the old city, close to the north exit of Charles bridge, this wonderful baroque quarter is a hub in transport around town.

Waiting for the tram is not so boring as in many other places.

Near Wenceslas square and Narodni museum, this small street market is a nice stop, with several products available. Being with women…

Wenceslas square is more an avenue than a square. Lined with shops and hotels, it is the centre of nightlife (if you’re male be prepared to meet “quick friends” in the square). Behind king Wenceslas statue, stands the monumental National Museum.

If I had to choose the best in Czech Republic I would have no doubt – Folklore.

Being in Prague I tried hard to find a live performance, and could only find it as a dinner animation in Holiday Inn. I had no doubt, and took all my team to that dinner. They went a little bit suspicious about the interest of that show, but soon were convinced.

Folk in the square – Feeling jealous

For more than 30 years that I am a lover of Czech dances. I searched everything to find a live performance in Prague, and discovered it in a wine dinner at Holiday Inn hotel.

Excellent, with an extra bonus: In our way out, the snow released the child hidden in most of us.

A couple of years later Tito went there in summer, and had free folk dances in main square. Well, that’s it, I must return in summer…

Back to Prague page
in Prague
| Tags: Memories, To see