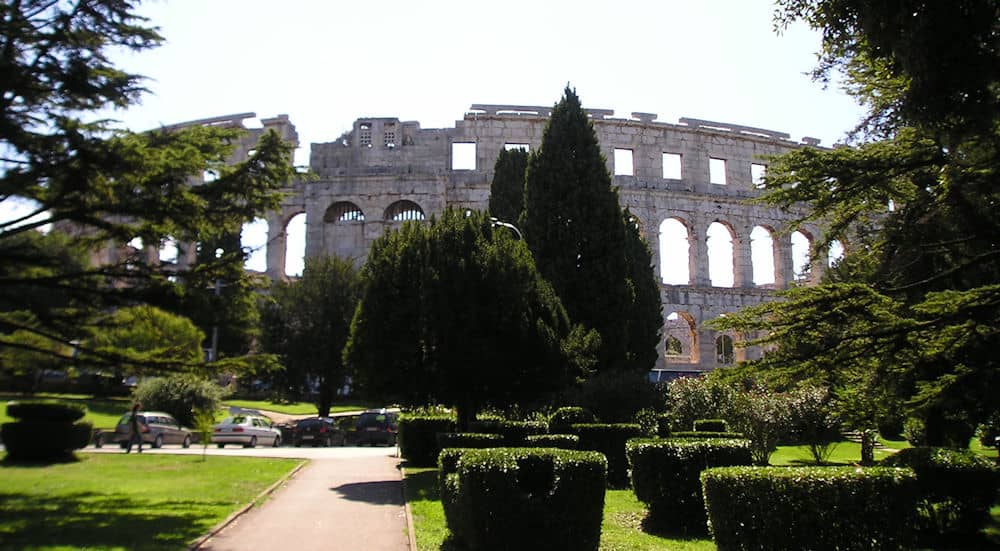 Standing around its ex-libris, the roman amphitheatre, Pula was the first warning about the way the Croatians try to make history survive to their long tradition of war after war. Built and destroyed, rebuilt and destroyed again, new monuments over the ruins of the old ones, life and death are always present everywhere, in a mix of dates, stiles, and influences.

Promoted as the most complete Roman amphitheatre, that may only apply to its external walls.

The interior suffered the common transformations of most Croatian monuments, and shows almost nothing of its original structure.

Much smaller than its brother, in Rome, it is a magnificent building, deserving the quick mandatory visit.

The whole area in front of the Communal Palace and Temple of Augustus was being excavated, in search of the Roman Forum.

One day (if no more war comes to change things) it will be presented and explained.

​When we were there, only enclosed rocks and fences could be seen.

Imagine a medieval barricade, built in a hurry, while the enemy approaches: Everything possible was used, and so, stones, pillars and maybe statues were piled in despair.

​Time passed and the now useless walls were destroyed, but a small part stands, by the kept twin doors. Browse the walls – Impressive!

​It’s a hard and respectful effort to preserve, but it is also a visual mess. Till now, the final and prevailing style is Venetian. But… till when? Impressive, again!

The triumphal Sergio’s arch was built shortly before Christ’s birth, in Corinthian style. Today, it gives expression to the central square, and shopping streets.

​Until going there I only knew one cathedral with the tower separated from the main building – in Leiria.

​Now, I knew a second one. And that was my most remarkable note about this monument, as usually built-destroyed-rebuilt, sharing stones with other, including the amphitheater.

Originally from the 6th century, escaping from demolitions and bombs, this small chapel, standing beside a small garden that replaced a quarter erased in WW2, was built in Ravenna’s style. It seems that it had some rich mosaics that were moved to the Archaeological Museum of Istria.

Walking along the short and narrow streets of the old town is a good opportunity to see the succession of styles and exterior influences in Istria.

One (good) idea to promote some monuments is their use in cultural or ludic events. The magnificence of the ambiance enhances the quality of the show, if well integrated in it. However, all events have their backdoor stage, and the mix of modern stuff with history, when seen out of the desired context, is sometimes unwelcome. I wished I had attended the concert prepared in Pula, but I didn’t like its preparation.

Back to Pula page
in Pula
| Tags: To see, Useful