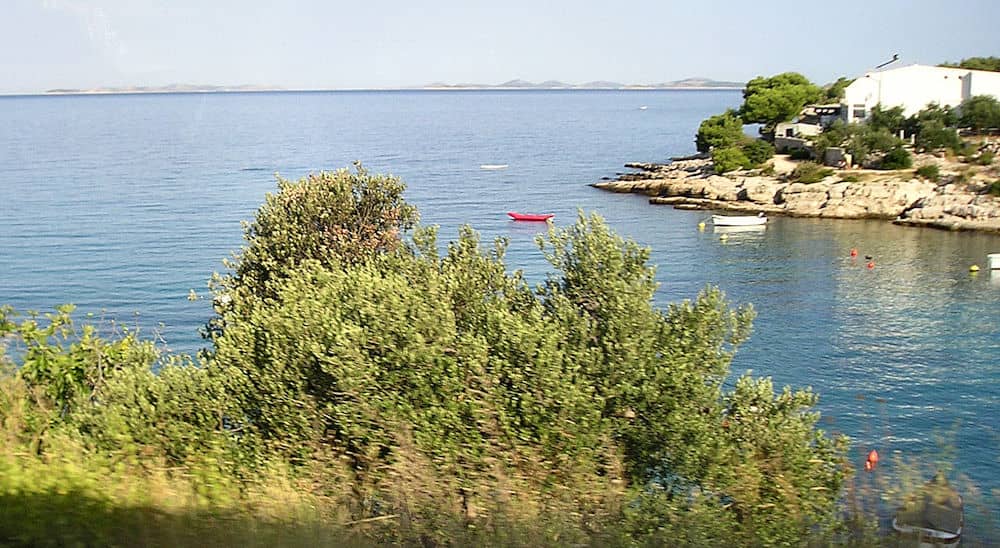 Vodice was, in our plans, the first day on the beach. The hotel mentioned as a resort was a good promise, and the city listed nothing special to see, so, upon arrival we went to the sea.

Well it was a real adventure, that made us give up of the beach, and travel a bit along the coast. Not far from the hotel, we found a REAL beach, but already out of time to try it.
Lots of people, a lively image, and the conclusion that I should have prepared better that stop

“Hotel in the beach” is not exactly the same as “Hotel near the beach” as I found in Vodice. I had there one of my worst experiences in the sea, and, a couple of hundred meters to the left, the beach could be… well, a beach!

As a matter of fact, this ocean resort near Sibenik makes me confuse.

The thousands of people enjoying the night showed the popularity of Vodice, but in front of my hotel, swimming was a nightmare.

I couldn’t check the beach, but I don’t believe it would be possible to attract so many people if it didn’t have the necessary conditions. Anyway, I must confess that Vodice was my worst experience in Croatia.

While leaving town, in the morning, we were surprised by the calm, in strong contrast with the lively animation in the eve.

Seeing us looking so attentively through the window, the guide announced us one building as the typical Croatian house.

​Don’t ask me the distinctive details. He didn’t explain, I didn’t notice. But all the landscape and buildings seem to follow the typical look and, if it is possible to say so after such a convulsive history, the typical architecture.

Back to Vodice page
in Vodice
| Tags: To see