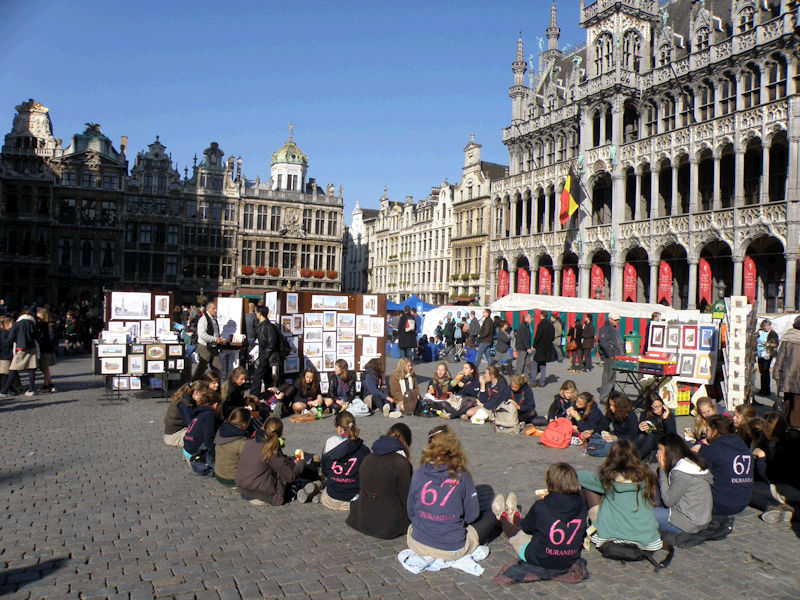 After the disappointing first visit, and the more convincing second one, Brussels became a recurrent destination, increasing the interest for the city, and the passion for Grand Place.

Started in 1854, it was finished in 1908, with recent renovation. It was planned by the same architect who created the Place of Justice, Joseph Poelaert.

​Located close to the kings residential area, it is the burial place for the royal family.

Behind the church is referenced a very interesting cemetery that we couldn’t visit.

Attributed to the architect L. Fayd’herbe, a pupil of Rubens, this church shows the Italian-influenced Flemish Baroque style of the 17th century, with a facade that is considered one of the most beautiful in Belgium.

The church originally served as the center for the “beguines” (lay sisters) who lived in houses around it.
​​After a fire in 2001 it has been restored to the actual look.

One of the main commercial avenues, it mixes some classical construction with modern and large buildings.

Our attention was caught by a detail -a large hen atop one of the beautiful buildings.​

​He died before ending the work that was completed by some other authors, from the architect Janlet to Georges Houtsfont who created the mask or de Vreese, who conceived the animals surrounding the fountain.

By the time of our visit the fountain was empty and dry, for a longtime, it seemed, so I don’t know if that is its normal situation

In the 19th century the old church from the 1 4th century was replaced by this one, only leaving from the original the Baroque bell tower that standing apart from the church, confused me with the black tower.

The church, inspired by the Parisian St. Eustache, was being cleaned and we didn’t enter.

In front of the church, the old docks filled by sanitary reasons are now a long avenue.

​One of the most gracious churches of the Flemish Baroque period, but it is also the most untypical of the Flemish style not showing the Latin cross, but a hexagonal form.

The facade is nice and well proportioned. Inside there are some remarkable pieces of art.

The oldest church in Brussels, its construction began in 1210 and was completed by the end of the 13th century.

​It reflects the transition between Romanesque and Gothic styles.

A Baroque bell tower was added after the French artillery bombardment of 1695, and several campaigns of restoration were undertaken in the 19th and 20th centuries.

Its remarkable the pulpit, intricately carved hunk featuring part of the Old Testament.

Albertina is a common female name in Portugal and it seemed strange to see it in Brussels, until I remembered “Albert” as a king’s name.

Albertine is the popular name to the royal library, the square and the garden. It’s a nice wide space, that we saw superficially, but the curiosity led me to Norali’s travelogue, with precious details of the garden.

The Brussels opera house is officially called Le Théâtre Royal de la Monnaie, because the place of its construction was related to a coin.

It has challenged Paris as one of the most popular theatres in Europe. During its life it has undergone two reconstructions since its first conception in 1700. The second design, by Louise Damesme was built in 1818 and survived until 1855.

After only 40 years, the theater was changed once again. Its original designer was Joseph Poelaert, the same designer for the Palais de Justice, using a mix of Neo-Baroque, Neo-Renaissance and Neo-Rococo.
​
In 1985, it was reconstructed, but the design was kept, and the interior of the concert hall remains unchanged.

With an audience of 1,700, it still hosts plays, operas, and all kinds of concerts.

Covering 12 centuries of history, this large cathedral was finished in 1047, but it was renovated in the 13th century. The actual facade comes from the 15th century.

The most interesting details are the stained glass windows, and some vestiges of the initial construction.

Just one question:
What’s the purpose of the ugly structure used to “hide” it during our visit?
Address: Parvis de Sainte Gudule

The ex-libris
Why millions of people merge each day before this 61 cm high bronze statue of a child, pissing water to a small basin?
Well… because everybody goes.
No surprise that the ridiculous “monument” became the theme of many legends, traditions, and… business.
“I was there” or “I saw it” are two versions of the same common objective, between two bites in the mandatory chocolate.
Serve yourself!
Address: Corner of Rue de l’ Etuve and Rue du Chêne

I’ve been in Brussels many times: the first one in 1971 for a good stay, but I didn’t like the city, with exception to Grand Place and Atomium. Too dark for my expectations – I didn’t know much outside the white and clear Portugal, when I crossed the Pyrenees for the first time, in those 70s…

The second one was for a short visit with the boys, and without time for more than a quick stop in Grand Place (and to lunch in Alfama, a good Portuguese restaurant close to it, with great memories from the first stay), we stopped also in Heysel park to visit the Chinese pavilion and Japanese tower.
Well, they are Belgian buildings with oriental style, built in the beginning of the 20th century, with decorative details coming from Shanghai and Yokohama.
The visit is easy and quick as we needed, if you don’t use much time to see the temporary exhibit that you may find there, generally of oriental arts.

The entrance costs 3€ (closed on Mondays) and it is free in the first Wednesday of each month.
Third visit (last time in Heizel)… better photos… still nice!

Facing the Chinese pavilion, this Japanese complex, was built to show two different structures – a high red tower and an adjacent wooden pavilion.

Housing temporary collections of Japan (Closed, now?), it is surrounded by a garden with many Japanese plants.

The Chinese and Japanese pavilions were built in the beginning of the 20th century, as a result of the passion of king Leopold II for eastern culture.

​Park of the Fiftieth Anniversary

It was the place of the national exhibition commemorating 50 years of independence, in 1880.

ts most remarkable structure is the Triumphal arch, built in 1905, but the complex houses also three museums and a mosque.

By the end of the day we ended by incident in a very beautiful area that made me feel sorry for having not enough time to explore it as it deserved – the Sablon.

Wonderful old houses, a promising church already closed, many appealing bars and restaurants led me to a conclusion – next time in Brussels I will reserve time to… Sablon.

​Just one more visit, by day, to confirm that there are two Sablons, the big one, with the cafes and… the other

​In my previous visit, we didn’t approach the royal palace – I didn’t inform the king of my visit to Brussels, and I always knew that it is impolite to appear without announcement.
​
In the recent visit we had a closer look, but again without an invitation, we didn’t enter. Only back home I read in the official site that it may be visited and:

“The Palace is where His Majesty the King exercises his prerogatives as Head of State, grants audiences and deals with affairs of state.

Apart from the offices of the King and the Queen, the Royal Palace houses the services of the Grand Marshal of the Court, the King’s Head of Cabinet, the Head of the King’s Military Household and the Intendant of the King’s Civil List. The Palace also includes the State Rooms where large receptions are held, as well as the apartments provided for foreign Heads of State during official visits.”

This may be, I think, one of the least touristy areas in Brussels – a pot of cultures and nationalities, composing one of the poorest areas in town. We had there a cheap meal, and saw not much, due to the late hour.

Maybe my impression is wrong, maybe the closed church that came from a chapel in 1361 to the actual Neo-Baroque look in 1979, will be interesting, but I must confess that it is out of my preferences for next time in Brussels.

…And suddenly, we found ourselves in Spain.

​The statue of D. Quixote and Sancho Pança that I knew in Madrid, was in front of us.

Well, it is not Spain, but Spain square, wisely ornamented with a replica of the original creation of Lorenzo Valera.

Located in rue Fossé, 18, La Gaîté was a legendary club in the centre of Brussels until closing in 1982.

Anneessens tower, also called angle tower, is one of the few remains of the old city walls, built in the 12th century.

Built by the end of the 19th century as part of a plan to embellish the city, this palace in Neo-Renaissance style mixed with Second Empire, it has many decorative motifs from several artists.
​
Located in Boulevard Anspach, it is today a “dead” building, since the trading start to be done by computer.

Escaping from demolition of the old walls in the 16th century, because it was a good storage place, this isolated tower, close to St Katherine church, is one of the few remains of those walls.

Be careful – the tower is small, and somewhat hidden. I was looking for it and was mislead by St Katherine’s bell tower, that stands apart from the church, so… I didn’t really see it.

Well, this was in the first time, but not in the second one… as the photo proofs.

Back to Brussels page
in Brussels
| Tags: To see