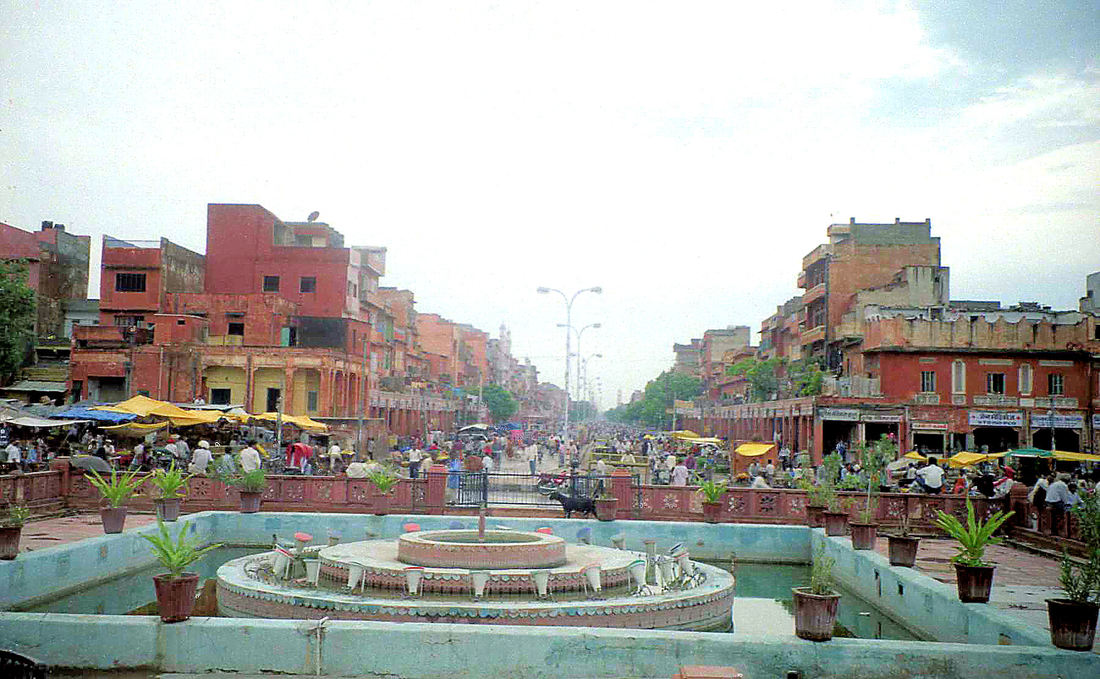 No place in India seemed so colourful and vivid as Jaipur.

The tour around town pulled by a bike was super, and the contact with people in the streets and bazaars was easy and extremely friendly.

Of course, with lots of things to see, I wished I had more time for Jaipur.

All the concepts of India
​
Riding an elephant uphill seems a cliche for tourists. And it is. But it really helps feeling the ambiance and plunging deeper in India.

I had a personal experience in Fort Amber… well… I describe it in “Personal memories” section. However, the visit to the fort, going up by elephant, on foot, or by helicopter, is something no one can miss.

I’m not going to repeat everything you can read in most texts about this palace, in Wikipedia, or something alike.

My special feeling, besides the confirmation of the beauty of its facade, was the way it is integrated with the city, dominating the image of the area, but very well integrated in the whole.

Not the usual outstanding luxury apart from the city and contrasting with it, but something being part of the street, living with it, still hiding the faces of gone women, behind its delicate windows.

The city palace complex still has some areas reserved as royal residence, but several buildings are opened to public as a museum.

Be prepared to pay the same than 5 Indian citizens to enter, doubling the price if carrying a camera, however, for occidental uses, it is not expensive – about 2€ to enter

A very beautiful gate to City Palace is made of white marble, flanked by two elephants also in marble, carved in a single block,and added later to celebrate the birth of Maharaja’s son is called Rajendra Pol, which means gateway of princess.
​

Diwan-I-Khas
​
Diwan-I-Khas is a very harmonious hall, with beautiful floor and chandeliers, but where the top attraction is a pair of huge silver vessels, the biggest in the world, according to Guinness Book of Records.

The complex of city palace is composed by a few specific and distinct areas.

The Maharani’s palace impresses for its delicacy, with wonderful stone carvings and frescoes painted with dust of precious stones. Today it is a museum of the weapons of the Maharajah’s family.

There are two silver urns placed prominently in the City Palace. Visitors often express themselves puzzled by their presence…

Yes, we did to! But let me continue to reproduce what I read in internet:

… particularly since the attendants are quick to point out that these are the largest silver objects in the world, as recorded in the Guinness Book of World Records.

More interesting is the reason these urns — there were three altogether, but one has since been lost — came to be made.
According to Hindu belief, crossing the seas to journey to distant lands inhabited by heathen races was an act so unholy, it brought upon the perpetrator untold calamities. Not content with that, it was deemed that the contaminated person would also lose his caste in the Indian social context.

Built in the 19th century, this fabulous palace is now converted in Jaipur central museum.

It displays a large and interesting collection of local art and crafts.

Jantar Mantar is referred as a set of constructions used to astrological observation, but, nowadays, it is difficult to understand the purpose and use of each element.

This was the first time that we loved to loose ourselves inside the hotel, with the feelings of being in a featured monument.

All the space is absolutely fantastic, and, if it is open only for the guests, it’s a good reason to stay at least one night there.

Back to Jaipur page
in Jaipur
| Tags: To see