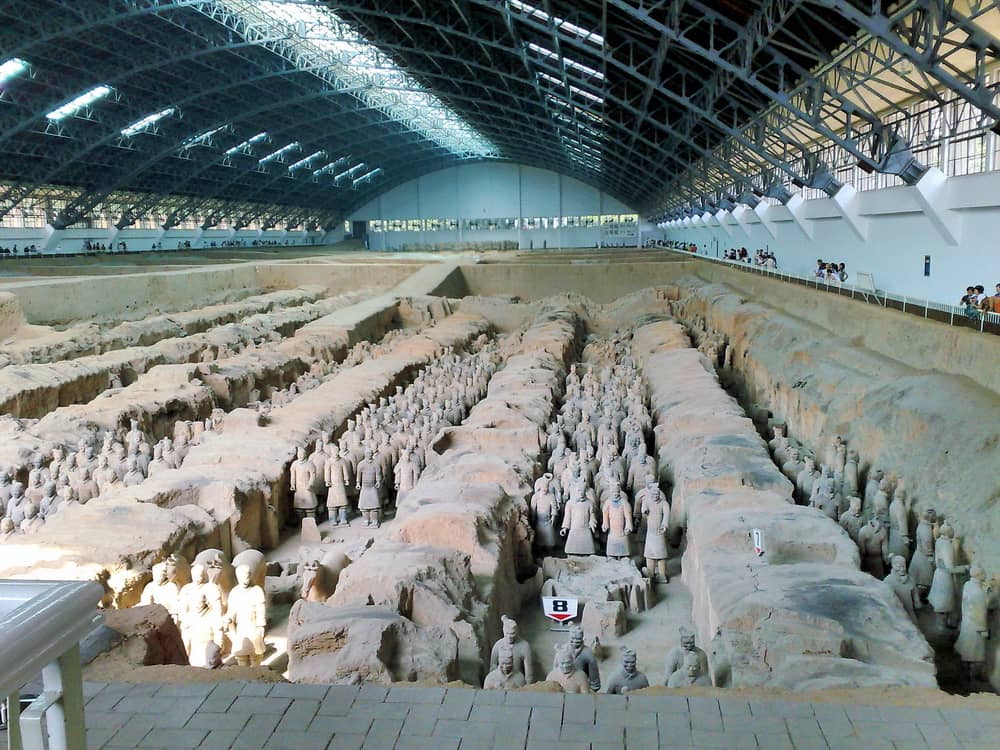 Maybe it’s true… that story of the 8th wonder…

A very well-conceived 360º film explains how did time lead to the actual situation: the construction, the destruction by the Mongols, the recent discovery. It is, really, enough reason to visit Xi’an.

When the terracotta figures are dug, they show almost the original colors, but, in contact with the air, the colors rapidly fade and disappear. That’s why they stopped digging, even returning some figures back to the earth.

In the universities they are studying the best way to preserve the colors and only after that the work to unearth an reconstruct the figures will proceed.

Meanwhile, there are hundreds to see, but… almost colorless!

We enter pit 1, the larger one, and we get immediately the notion of the huge size of the archaeological site, but they alert us that only a small part is dug, and that the main open area is pit 3. Why?

Because it is the headquarters. Generals, nobles and other important people seem to be represented there. Well, maybe historically that is important, but for the general visitor like us nothing beats the impact of the immense pit 1.

Well done, this explanatory film, explaining the construction of the statues and their destruction by the mongols.

The synthesis is perfect, and we really feel in the middle of the action.

Twenty quick minutes that you shouldn’t miss, at no extra charge.

This museum is a grave. The dug mausoleum of Emperor Liu Qi is fundamental to understand the more outstanding terracotta warriors.

In the dark corridors, we can see lots of small dolls, buried with the emperor, and, according to the tradition, representing people to serve him.

The small step from dolls to actual size figures was only a matter of power and ambition.

There is not a large collection in this museum, but the wide space, under dimmed light, is very well planned and presented. So, you must be aware that the real collection is displayed in the many pits that surround the emperor’s tomb.

Getting back to light, you’ll meet… a shop, of course.

A challenge
​
What a challenge for the photo maniacs!

The poor illumination, the reflexes in the glass, the impossibility to use flash, the uncomfortable position, everything contributes to the poor quality of all the taken pictures.

Of course, some efforts deserve respect!

Taking a picture of a detail is something hard to do, unless you use the tactic of holding your camera in the air and taking the picture above dozens of heads.

In the display by the terracotta warriors I did it, getting a reasonable picture of something that… I couldn’t see.

When, finally, the crowds allowed a short break I noticed that it was a sword. But all the large stories around it were… in Chinese, so, I couldn’t find out why was it so important for them, and that allows me to use the imagination: it was the emperor’s sword.

To avoid scratches in the glass, everybody receives a couple of plastic bags to cover the shoes.

Clever, but the surprise of the situation is a good opportunity for some laughing, and some shoes are hard to cover.

“Bottoms up”, then, will be the common position to see the Museum… for those who do risk.

The terracotta warriors have the expected evidence in Xi’an’s Provincial Museum. They are simple details that will not replace the visit of the excavations site.

For those who had been there, the display doesn’t add much in that subject, however, there are other topics deserving to be visited.

Ceramics
Ceramics and porcelain are some of the most distinguished arts in China. Though mainly concentrated in the older days, the collection of Provincial Museum is very rich, showing very uncommon pieces and techniques… at least for a non-expert as me!