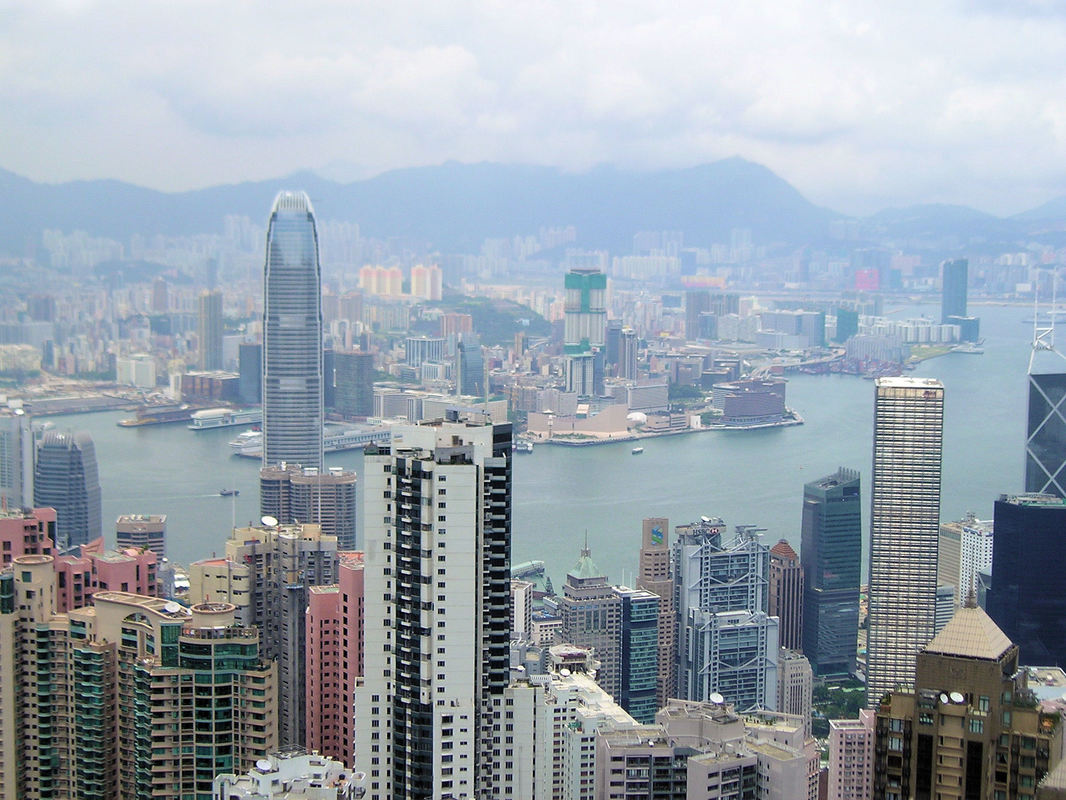 A few years ago, Hong Kong should have been a precious visit, allowing an approximate idea of China, mixed with British organization.
​Today, it seems to have lost importance: China is an open country, and arriving in HK after visiting China, as we did, loses a lot of impact. A few British remains, the beautiful and lively bay, the great social organization, and… modern architecture. Not much, but enough to justify a visit.

The bay is the gem of Hong Kong central, and with total justice: no matter in which side you are, either at low or high level, the views of the bay are always gorgeous.

Crossing the bay in a ferry is a mandatory experience, and no one misses the light show at night.We felt sorry, because we saw the bay under several weather conditions, but never under a bright sun.

​I think, there will be sun in Hong Kong… sometimes, but not for us.

Hong Kong central, by day, is… shopping, so, nothing better for a brake in the night than… shopping!

However, I had a compensation: I think that I was the only foreigner to notice the temple that, probably, gave name to the street (Fernanda is in the picture but didn’t see it – her eyes and thoughts where in… well, you know!

May I make a confession? I don’t understand why my guide book mentioned Star Ferry as a great attraction. I understand that in an extremely well organized city, with hi-tech solutions in mass transport, the “old” ferries may be considered a piece of museum, kept in action for cultural reasons.

​I know that, this line, created in 1888 has a very rich story, but I must confess that, for me, it was rather common, matching the conditions of many ferries regularly used in Europe (and still a dream in many third world countries). And yes, it is a cheap and nice way to cross (and see) the bay. Maybe that will be enough to the recommendations in the guide book.

One of the most remarkable achievements in Hong Kong central is the intricate network of protected passages over the roads.

It’s easy to escape the danger (the noise and the smoke) of the traffic, and it is comfortable to circulate in the air-conditioning from building to building.

However, that gives us the strange feeling of being somewhat… confined, without the chance of feeling the town, and, as all the knots of the network, are shopping malls… dramatic!

Well… someone that I know didn’t feel anything alike, you may believe…

​In a so dense forest of concrete, it’s nice to find a place with a traditional look and small proportions.
This square is not a big one, the statue is not impressive, but upon arriving we almost feel, at last, free to breath.
A break in the massive soil occupation.

British Remains
​​There are not as many signs of British presence in Hong Kong central as we expected. Of course, it’s easy to find a house, a church, a garden with colonial style, but less than expected, and discreetly hidden in the cement and glass “forest”.

​One of the best exceptions is the Legislative Assembly, with a small garden “protecting” it, and throwing the modern giants to the background.

Concrete and tarmac leave not much space in Hong Kong Central district, but where it is available, space is carefully treated.

​Exchange square is one of the examples, a small area with lakes and statues but also with the absence of something green.

Mid Levels
​
As you climb uphill, the landscape changes: the wide avenues give place to narrow winding roads, trees line the roads, and the skyscrapers appear as the exception to the lower profile of the houses, here and there, seeming a planned aggression to the landscape.
We made it by bus – Walking should be hard!

Described as the longest escalator in the world, with its 800 meters of total length, this may be useful for locals, but not much for tourists: if you go up to the top, as they are one way only, and mid-levels a residential area, you will end facing the problem of how to get out of there.
We used it only for a couple of sections and left, allowing us to find the way to Man Mo temple, descending instead of climbing, wit a short and easy look at Hollywood Rd.

Too discreet in the outside, this temple is an explosion of colors as soon as you enter the door. Small spaces to lots of details, compose a dense atmosphere, where people jostles, moving around for prayer or photo.Originally built in 1848 and dedicated to Man Cheong, the God of Literature and Kwan Yu (Mo), the god of war, this temple was use to settle all kind of conflicts.

​The tradition has faded but devotees continue to come and burn huge bell-shaped coils of incense that we may see hanging from the ceiling, providing the smoke and intense smell common in all Chinese temples.

Art collectors may spend hours in this street, as the shops are side by side, and the announced prices are inviting.

The others, like us (thanks God, Fernanda only collects shoes and bags), do have nothing special to see, just a quick look in the way to or from Man Mo temple.
​

Skyscrapers are the dominant look of Hong Kong, most of them becoming anonymous in the competitive forest of steel, cement and glass. The Bank of China, with its distinctive size and forms, glows in the whole.
​With its 315 meters, the Bank of China Tower was the first building outside USA to break the 1,000 feet (300 m) mark, and the tallest building in Hong Kong and Asia, when it was built, in the beginning of the nineties.

Views from Victoria Peak
​
I spent three days in Hong Kong, delaying the visit to Victoria peak because the weather was so cloudy that we couldn’t see it from below.

At last, we got a couple of clear hours and went up. Be careful with this point: the best of the peak are the views and they aren’t always available.

​We HAD good views.

in Hong Kong
| Tags: To see