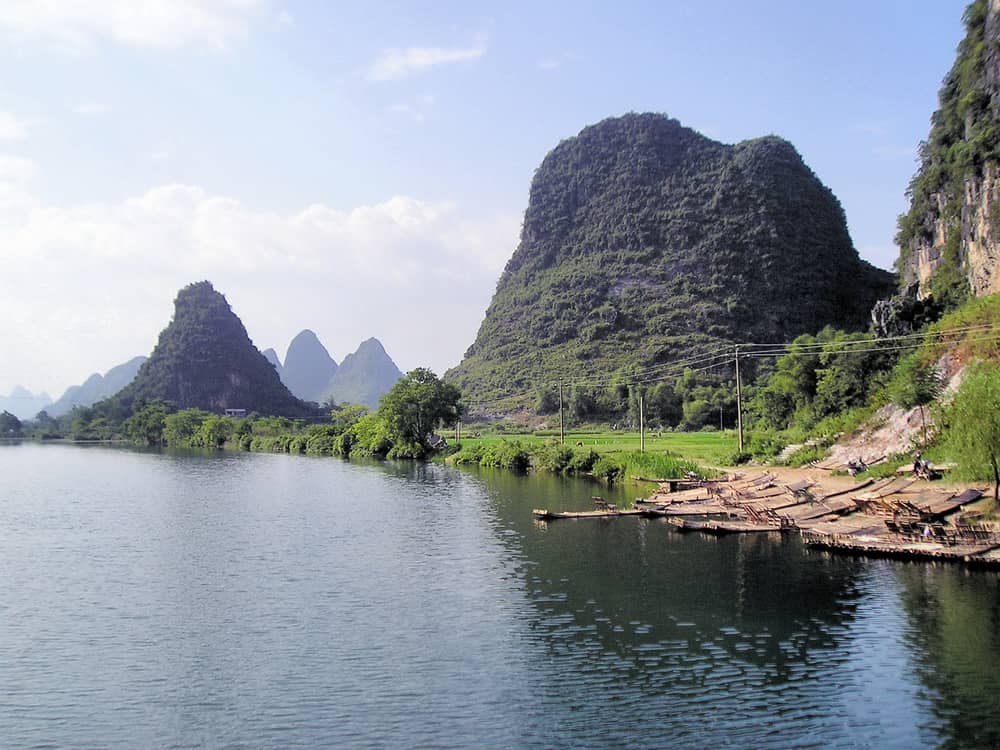 Small and calm city, western food, marvellous landscape, Yangshuo was the rural touch in a trip concentrated in big towns.
​
Though carefully carried from beautiful urban development to the also beautiful rural display, we could have a side view of real rural life.

It looks as hard as expected. China grows at two different speeds, and there are millions far behind the splendors of the progressive big cities.

The cruise in Li river from Guilin to Yangshuo has three steps:

1 – The excitement of the beautiful landscape “passing” by your boat, in a succession of odd rock formations and life coming to the river.

2 – The boring section, when things get repetitive, and beauty seems to fade, with empty or abandoned banks.

3 – The final approach to Yangshuo, where beauty comes back, with typical construction mixing with the green, and life returning to the river.

Visiting Yangshuo shows that it is not a big city (by Chinese standards) and, despite being surrounded by steep peaks, it’s easy to walk around, or to rent a bike.

Some nice spots in the rural area close to the city do deserve a look.

I didn’t find out if we were in a hotel by a public lake, or if the lake was part of the hotel.

​Anyway, the integration was perfect, composing one of the prettiest spots of the city.

The name was given by the cafes and restaurants selling western food, but everything is quite Chinese, even those “western” establishments.

Western food is just a detail, in a street market that sells everything from early in the morning until late in the night.

Around Yangshuo we saw the best views of China, with the sun helping to compose “postcard pictures”. Each angle, each detail seemed to be the most beautiful… until the next one…

Visiting Yangshuo it is very important to go out of town!

Though clearly performing for tourists, the “actors” really look like natural people, and those who surrounded us trying to sell something were real people.
Not pushy, real friendly and gentle people, providing a contrasting look to the powerful, rich, and modern China that we felt around us all the time.

Don’t miss it. At 7.30 PM a boat (50 RMB per person) leaves to the river, with a man paddling at its side. Under a strong light, a few cormorants swim and dive, catching the fish attracted by the light.

They have a ribbon tied in the neck that allows them to swallow only the very small fish. From time to time, the sailor grabs them, and empties their necks into a basket. But, at the end, one of the birds still had three fishes in the throat!

NOTE: You will be in a cloud of mosquitoes, so, be prepared, and use repellent in your exposed areas.

In several places we noticed that some people use long special sleeves to drive.

I never saw it anywhere else, and don’t know the idea (protecting from the sun, as Sirgaw suggests? Maybe!).

Even the electric car that took us from the hotel in Yangshuo to the farming area, was driven by a lady wearing… long sleeves.

Though carefully carried from beautiful urban development to the also beautiful rural display, we could have a side view of real rural life.

It looks as hard as expected. China grows at two different speeds, and there are millions far behind the splendours of the progressive big cities.

The landscape is fabulous, but locals have no time to enjoy it: agriculture is a very hard life, and the use of ancient techniques turn it harder.

Rice is the main product, and buffaloes the great help, but men and women have to struggle!

in Yangshuo
| Tags: To see