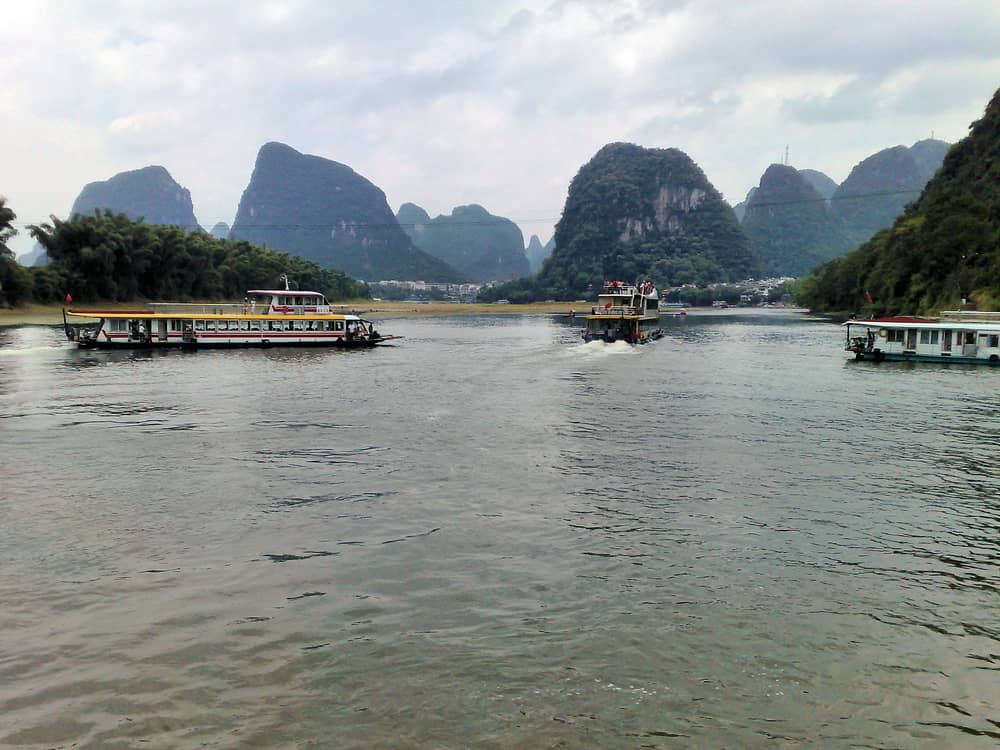 No, it was not the landscape: I went there expecting a marvelous landscape and saw a marvelous landscape. The surprise was… the city. A modern, organized, and very tourist-oriented city, far from the rural look I was expecting.
The fir lake is a perfect central ornament, while the elephant’s trunk is just a common spot. Out of town the Reed Flute Caves are interesting and well illuminated.

Li River is the main attraction, and, after learning in location that it was the first Chinese town opened to tourism, everything makes sense.
However, visiting Guilin was a surprise.

​A couple of lakes meandering in town complement the river: Fir Lake, edged by a small and cool garden, with its two pagodas, is really nice, and one of the most photogenic points of Guilin.

In the fast developing cities, it’s easy to loose the image of China.

Big buildings, large avenues, compose quarters that could be… everywhere else in the world.

However, here and there, even in the most transformed cities, it’s possible to see the views that filled our imaginary. Fir Lake it’s true China when visiting Guilin.

One of the attractions that we can’t miss visiting Guilin is the show that each night, at 8.30 PM, takes place in the rear of the hotel: from the top, a cascade of water descends along the glasses of the wall, with music in the background. It’s nice, and it is, indeed, the most spectacular way to … wash windows!

Progress against cliches
​
Descending Li River all the tourists, camera in hand, waited anxiously for the cliche: a raft standing in the river, with a fisherman covered by the traditional hat.

Now, life depends on tourism, and fishing is less rewarding than travelling tourists. The rafts were there but with colorful umbrellas over a comfortable chair.

70 000
​
​I was told that the people visiting Guilin to descend Li river were about 70000 each day. Correct or not, we really feel like being part of a long caravan, always with a couple of boats ahead and behind us.

70 000, with 100 people per boat makes 7000 boats, which seems too exaggerated, but, anyway, you do never count on a calm and lonely presence in the river.

Li River banks
​
I was expecting a Li river full of live, with lots of villages bordering it and living on it.

We saw animals (not many) and a few houses, but many of them seeming… abandoned.

I understand that the boats passing by are not significant to the local’s life, and business is only placed at both ends of the itinerary, but water is life, China has billions…

I don’t know if it is announced for being interesting, or just for being there.

There were some boats stopped nearby, but I saw no one entering it, and we had no chance to leave the boat, too big to approach the entrance.

Yangti
​
Descending Li river, you may receive a well detailed map, that gives a name to almost all the geological formations in the banks, and to some villages hidden in the green of the trees.

Yangti is one of those names, meaning… nothing. We may see one or two roofs, maybe a child by the river, but it’s hard to imagine the whole village that stands behind. Unless you travel by road, you will stay restricted to the magnificent performance of nature, that slides by your boat, without a real look of Chinese life.

7 Horses
​
​While you descend Li river the loudspeaker (and the supplied brochure), are putting names in everything that justifies a look.

A large mountain with stripes in its slopes is said to be “the 7 horses”.

Don’t try to find the horses: one is out for a race in Hong Kong, two are mating in the other side of the mountain, and the other four are shy.

Shallow Waters
​
In summer the water is so shallow that, here and there it is hard to believe that the big boat will pass. I heard that sometimes it gets so shallow that is absolutely impossible to pass.

So, since that descent is the great reason to a trip to Guilin or Yangshuo, if you go in the end of summer you better check out in advance how are the things, or you risk to miss it.

During the trip along the Li River, the crew tries to amuse the clients (and collect a few more RMB) with some local drinks.

It couldn’t fail the liquor with the snake. I don ’t know the price, but no one dared to taste. Well, if selling was the idea, the snake was not the best bet!

In Li River cruise, one raft – just one raft – approached, paddling, to the boat and offered some crafts to the tourists.

That was something we should expect, but the surprise was… only one?

Local Wine
​
​After lunch we were invited to taste a local wine on board. Some people thought that it was included, but not, they charged 50 RMB. I did taste it. It was a sweet wine, smelling like flowers, but… fresh and balanced. Not bad!

No need to say! I know that they charged the price of a couple of bottles, but… we were tourists, weren’t we?

The long last hour
​
The best of the trip in Li River is in the middle, so we may split it in three parts: the first one, when we “go to the party”, the second one, when we “enjoy the party”, and the third one, when we ”come from the party”. This means that the final part gets a little boring, turning the arrival in Yangshuo in a pleasant relief.

If you decide to use your time for more than to sleep, read or talk, it’s interesting to notice that the coast is not overbuilt: from the river we only see a few isolated houses, respecting the dominating nature.

A hole in the rock, a collection of tales, and… that’s all. Not particularly remarkable nor nice.

The best of it, was… the people around it. Some funny details, a cool garden, good sight of the river, and it’s done.

Elephant’s Trunk Park
​
Though the elephant’s trunk it is not a remarkable spot, it’s easy to understand what it means to locals, enough to justify the arrangement of all the area.

The small park is well maintained, and it allows some beautiful sights.

in Guilin
| Tags: To see