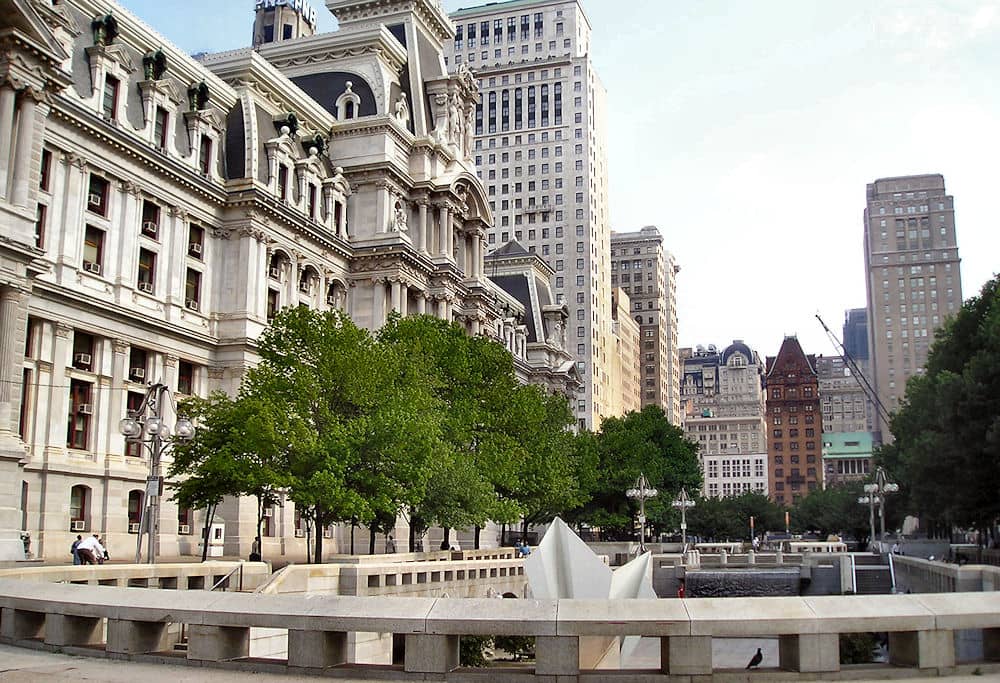 Three visits to Pennsylvania, all of them just passing by.

The first one allowed the visit of Harrisburg, in the way to Washington DC.

Philadelphia was seen from distance but another trip to Saint Louis, with return from Philadelphia allowed a day to visit the city.
Pittsburgh was the third stop, travelling by car from Corning.

Brief visits that were enough to understand the weight of tradition and agriculture in the state.

The Axis of Town

A beautiful avenue connects City Hall with the Philadelphia Museum of Art.

​Too long to walk, it is a good reference for orientation, and it’s easy to see, using the hop on hop off buses, stopping in the most convenient locations, to visit its most interesting points.

The centre of Logan square is occupied by a fountain with native figures representing the waterways in the area and a few animals, conceived by Alexander Stirling.

The Nest of a Nation

Revered by the American, this old (very old, in American scale) building is a landmark in their history, and a reference to democracy. Don’t expect astonishing sights, just the authenticity and the respectful image for a short but brilliant history.

Visiting Philadelphia without a photo by the bell is a sin.

Yes, it is there. Yes, it is broken. Yes, it is well guarded, forcing us to the now common gymnastics of taking off belts, shoes, and everything suspicious or not.

I know, that, despite having less than three centuries, it means, for the American, the same than D. Afonso Henriques sword for the Portuguese. So, my dear Americans, be prepared to strip if you come to Portugal to see the sword that is in… in… God! Where did they put the sword? Wait.

Don’t come yet. Or, if you do, try to see something else, while I locate the sword.

Walking in the old town we were attracted by several signs indicating the way to Benjamin Franklin tomb.

Curious we followed the signs, and verifying that it had a payed entrance we decided to skip (We know that Franklin means a lot to the American people, and I accept criticism, but only from those knowing Afonso Henriques).

​A few steps ahead there it was, seen across the fence, with nothing to show except… the American admiration expressed in coins. Not much, for an European tourist.

Halfway of Benjamin Franklin Parkway, a building was built to expose the private collection of Jules Matbaum, donated to the city.

​It’s the largest collection of Rodin outside Europe, and it’s easily accessed by all the touristic transports.

I was impressed with the views from the museum, specially with a roman looking building by the river, composing a nice scenery.

read that it was the Aquarium, but I had no time to confirm or to visit it. Next time!

In the centre of modern Philadelphia there’s an equestrian statue of a general who fought the civil war – George McClellan, by the artist Henry jackson Ellicott.

McClellan was defeated by Lincoln in presidential elections.

That’s what happens when you go somewhere without a previous reading to decide what to see.I had only a day in Philadelphia, that I used to see its highlights, in a hop on hop off basis. I’ve been twice by the Masonic temple, I noticed its impressive dimension and architecture, but I must confess that I thought it was just another modern American church, following classical European architecture. Being so short in time, I didn’t enter.I repented when I read that it was… masonic.

I never counted, but I think that I’ve entered temples of more than 20 religions (I know that masonry is not a religion, but, having a temple…), and love to see the different ways people use to deal with supernatural.

I’VE NEVER VISITED A MASONIC TEMPLE. As a matter of fact, in my country masonry it’s a discreet, almost secret organization. A big temple? No way!

And I was there, just a couple of steps more! Maybe I didn’t miss anything really important, but I missed a… opportunity. And that is important!

The centre of town is dominated by this huge building, that really impressed me. I’m not able to write about it, but I dare to transcribe visitphilly Overview:
​City Hall is the largest municipal building in the United States, containing over 14.5 acres of floor space. It is an architectural treasure inside and out. The public rooms are among the most lavish in the city. The City Council Chamber, the Mayor’s Reception Room, Conversation Hall and the Supreme Court Room are the most ornate.

The exterior is covered with sculpture representing the seasons and continents, as well as allegorical figures, heads and masks. All of the sculpture was designed by Alexander Milne Calder, including the 27-ton statue of William Penn atop the tower.

​Following it, you have the chance to see at least half of the city’s highlights. Not to be missed.

Popular tradition says that the first American flag was conceived and made by a Quaker lady named Elizabeth (Betsy).

​The house where she lived with another widow, after her husband death, was preserved, and you may visit both the house and the shop.

Philadelphia Museum – Too big for a rushing visit

​Without time to enter and admire its collection, one of the greatest in USA, we could only appreciate the site, but it deserves the trip, especially if you have time to enter, of course.

Located near the Logan Circle, this church with a heavy and dark look, follows the Italian Renaissance style, with a beautiful portico and some interesting frescoes.In its home page, monsignor Arthur E. Rogers invites us saying:

“Welcome to the Cathedral Basilica of Saints Peter and Paul, the mother church of the Archdiocese of Philadelphia. Francis Patrick Kenrick initiated the building of this magnificent Church in 1846. It was continued through the tenure of Saint John Neumann and completed in 1864 by Bishop (later Archbishop) Wood. You are invited to not only learn more about our Cathedral Basilica through this website but also to join us for liturgy, for private prayers and for a tour of our imposing Basilica.”

in Philadelphia
| Tags: To see