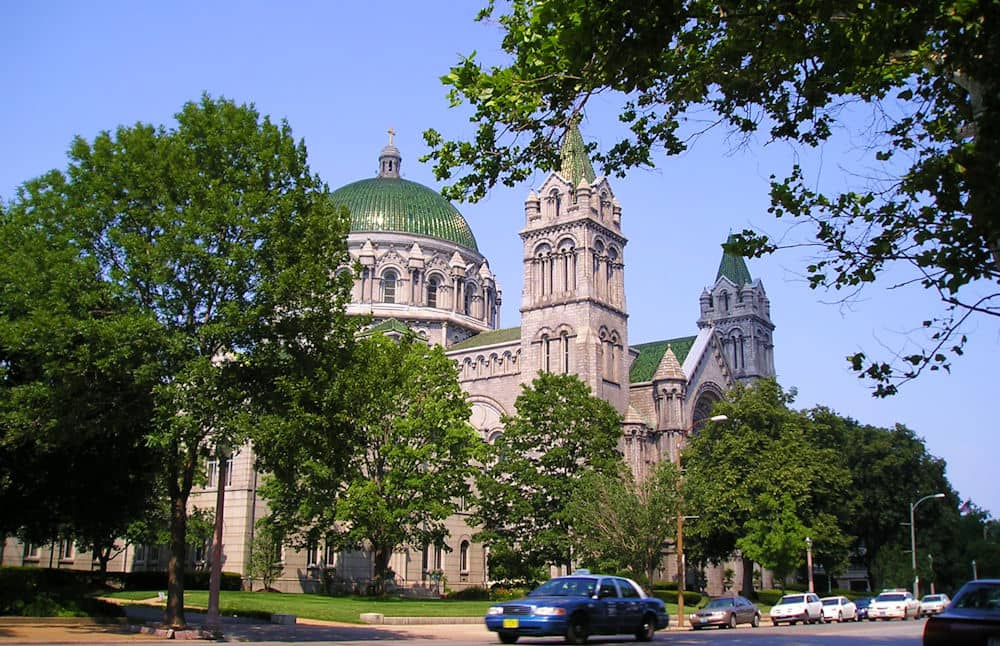 I arrived at Saint Louis at night, among a rather intense traffic, and my first impressions in the morning were: marvellous.
After a calm photo tour at sunrise the second impression was: where is everybody?
Downtown seemed a beautiful but almost dead town, nothing like the lively place I was expecting.
Travelling further west, things became different, correcting the wrong initial idea.
​But I was installed in downtown and coming back I returned to the sensation of cold emptiness.

Suddenly lots of people dressing red shirts converged to Bush stadium, and the neighbourhoods became a red town. For three successive days, baseball gave life to town. I almost decided to join the crowds and enter the stadium, but knowing nothing about that strange game, and aware of jet-lag that could make me fall asleep, I decided not to risk.
So… what did I keep from town? Well, I can’t summarise it. Maybe my tips give you an idea.

​Too big, but with details

Alerted by some tips I didn’t spend the fortune that costs going up, and to be honest, didn’t see anyone looking for the way up (what a contrast with Eiffel tower, for instance).

​The park is pleasant and the look of town from there very photogenic.

It’s, for sure, the craziest museum I ever saw, but it rivals with Science Museum, in London, as the liveliest.

Imagination and freedom merge in the use of recycled materials, to compose a place that, more than a museum, is a meeting place and a Luna park.

​Adults playing like kids, kids playing like adults, and some learning opportunities discreetly available here and there… Funny for all ages!

Pleasant Mall
A well done job transformed an old and useless train station in a commercial complex. The old style was preserved, and all the area was embellished. The big lake is refreshing, and, when I went there, a live demonstration of fisherman without hooks showed the kids the behaviour of fish in the wild. The only thing I don’t imagine was the effect in the children of one part of the show, when the man picked a small fish in a lateral aquarium, and moved it to the big one, to be swallowed by one of the bigger.

That’s natural behaviour, but for a small kid… to see a small fish running in despair before him until being killed… I don’t know!

While visiting Saint Louis I went daily to this factory, where the conference of GAS held several live demonstrations.

I know that, all year long, they provide private demonstrations, and glass is a spectacular art, not to be missed.

​(If you are distant from Saint Louis, you better know that you may have glass work demonstrations in Marinha Grande – Portugal, in another non-profit school)

I didn’t enter it.

​I was there too early in the morning and had no opportunity to come again at opening time.

​However, I was attracted by the marvellous ensemble it composes with the arch, in sunrise, providing a photo that… I like.

Big, Beautiful and out of time

Huge construction with a very beautiful interior, it put me thinking about the use or merit of copies:

​Does its value justify the costs? Who knows? I don’t, however, visiting Saint Louis cathedral was a pleasure.

In contrast with the straight skyscrapers that surround it, this classical building composes, with the arch in the background the best sight of town (all the photographers around it will agree with me!).

​The garden and fountain are also very well integrated in the whole.

After finding the centre of town somewhat cold and empty, this is where the city seems to live.

I could only see it under the strong sun, but understood the promises for the mild nights.

​It surely deserved some more time, that I couldn’t dedicate.

Magnificent quarter that I saw “by mistake” (blessed mistake).

​The architecture is varied but harmonious, and all the area exhales tranquillity and quality of life. It must be good, being a student of that school!

​
​Built in the end of the 19Th century, this church is part of the University, being also known as the College Church. Inspired in Irish Gothic, it composes a harmonic contrast with the modern look of the buildings that surround it.

This is the real heart of downtown.

All living beings I saw in downtown Saint Louis were walking to or from Bush Stadium.

Even I, knowing absolutely nothing about baseball, hesitated facing the idea of getting myself a ticket to see the Cardinals. And I was “obliged” to buy a Pujols’s red shirt to Horacio (he is a Benfica’s supporter, so red is his color).

A cultural reference to most people in the entire world, this mythic river showed me the emptiness of downtown. Two closed boat (during the day), one in each side, were transformed in casinos, waiting for the nightly visitors. I crossed the bridge (which allows me to tell my friends that I traveled to Illinois by foot) and the other side was a terrible disappointment.

​The only interesting thing was the meeting with a local policeman, who came to ask what the crazy Portuguese was doing in such an hostile place, and ended driving me to the best spot for the picture I wanted to take (yes, this one of the tip) and back to the bridge. Nice guy!
Address: Several Casinos to choose from, in St. Louis , MO 63102

​Is it still working or not?

No my dear Americans.

You need not to leave that building so dirty to convince us of its old age. The strong contrast with the modern surrounding buildings enhances its antiquity and classical look. But the black spots in many stones, give the idea of a ruined and abandoned house. What a pity.

The old historical port was invaded by restaurants and bars, becoming the meeting point downtown.

It’s a good preserving work, in a small area, which makes it easy to have a general look, and shortens the walk in the irregular cobblestone pavements.

​Of course, we had dinner there for a couple of times.

in Saint Louis
| Tags: To see