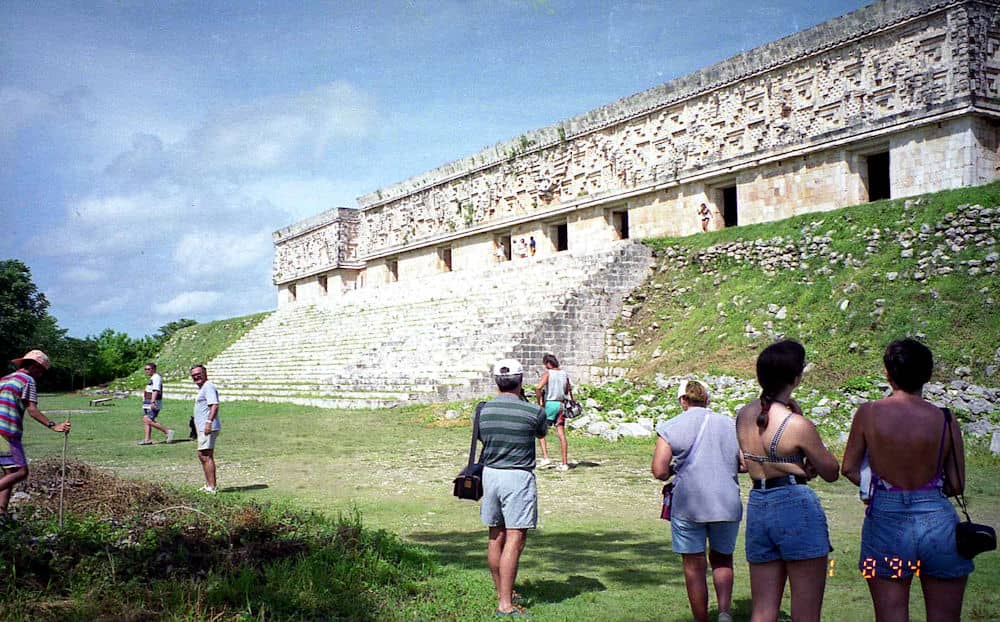 Visiting with my family was a mix of my strong sensations in Mexico – the splendour of the ruins, the hotel (giving the sensation of a five-star safari) and… “Moctezuma revenge”, the typical traveller disease that 5 AM made me take my eldest son to Muna, searching for medical assistance to face a fever reaching 41º Celsius.
​
Unforgettable!

This is the biggest and most impressive of the monuments in this ruins, and climbing to the the top is… imperative. We do it with small steps and, once there, we turn around and the world collapses!

“There are” no steps ahead of you, only a steep high ramp. While you think how to go back down, the pyramid bounces, in a strange sensation of movement, given by the clouds passing by.

There is not much to see there, the views are wide but generally green, and it is time to descend. A heavy chain runs down along the narrow steps that of course, are still there but looking much smaller than when they were almost at your eyes’ level.

Two options: Some of us used the feet a little across the small steps, and ran down in a controlled cadence; the other sat in the small steps, grabbing the chain, and dragged down step by step. No problems, but much more emotion than expected.

Well preserved, this playground allows us to understand easily how the game was played.

However, with so small and so high rings the score should be very far from the actual basketball values, and, if we remember that the usual award in these games was… life…

I couldn’t get an answer to a couple of buildings clearly… out of the context. One of them explained as… “maybe an observatory”, another one a ruin of a Spanish church.

Still waiting to be classified, they said!

I was so impressed visiting Uxmal (the site, the ruins, the preserved nature around them…) that I only had a quick look at the objects displayed in the visitor center.

My fault, justifying the warning – don’t imitate me, and try to see with attention the small objects collected from the ruins.

Back to Uxmal page
in Uxmal
| Tags: Historic place, To see