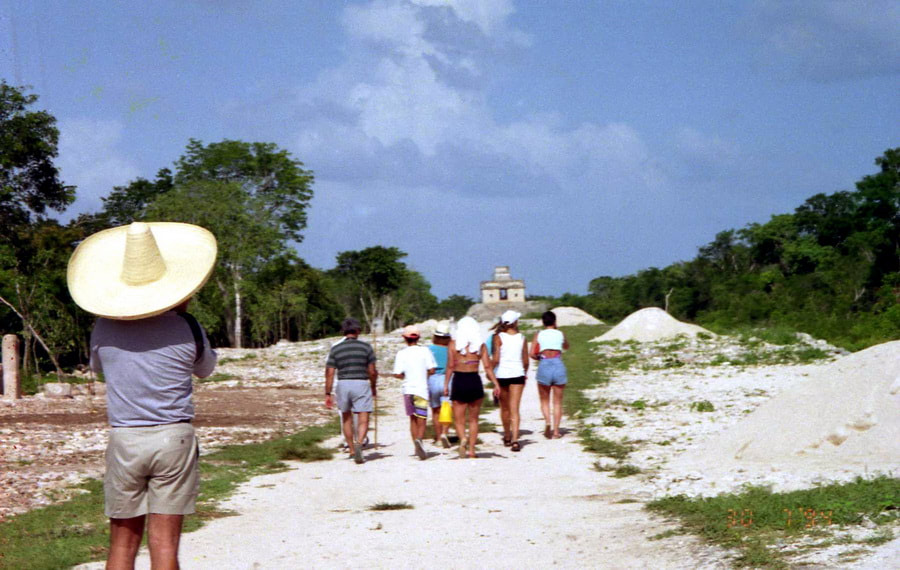 A few kilometres out of Mérida, Dzibilchaltun complex is one of the largest in Mexico, but only a few structures have been unearthed. It’s a long walk, under the heavy sun, and we better take our precautions.

​Don’t expect something like Chichen-Itza or Uxmal, but it still has its points of interest. For instance an open air cenote, where we may swim!

There’s a lot of history about these ruins (maybe more than in the other) and also some legends, generally concerning astronomic relationships.

There is, indeed, a planned alignment in the buildings that, at least, illustrates the elaborated explanations of the local guide that collects you at the entrance.

They say that this is one of the largest collections of ruins, still to unearth, but the visible part is poor in comparison with the know other areas.

The most famous building in the complex is the Temple of The Seven Dolls, whose name was given because of seven small effigies found there.

They say that on the Spring equinox, the sun rises so that it shines directly through one window of the temple and out the other, similarly to Chichen-Itza.

One thing that makes Dzibilchaltun different from the other ruins is the presence of a cenote in the open air.

​Walking the long distance to the Seven dolls, under the strong sun, invites to dive in the clear waters, in the way back, and… you may.

We did it, as most visitors do.