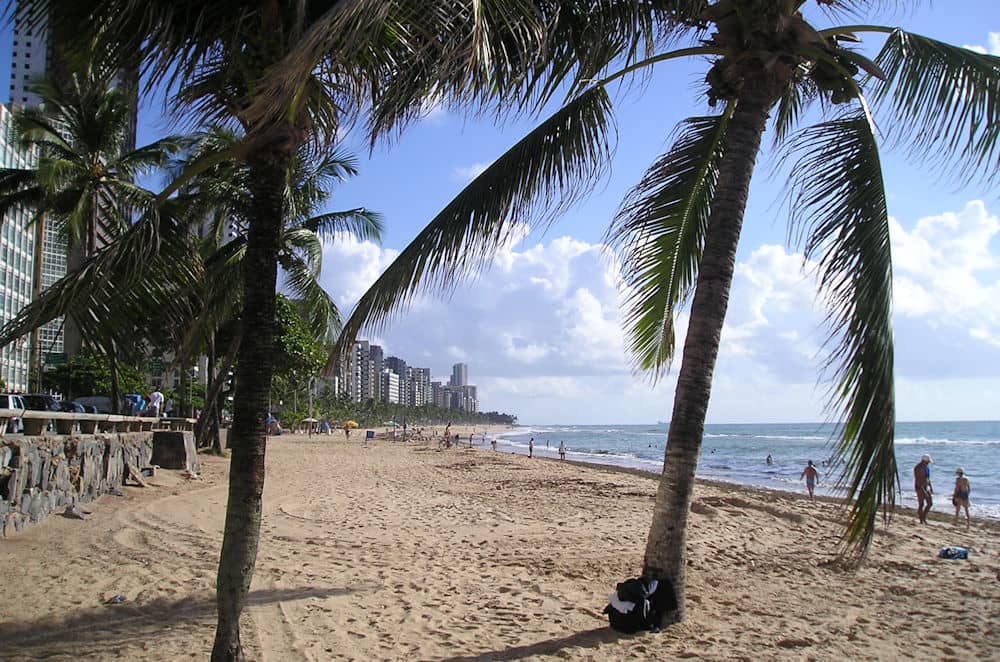 Recife was the hub from where i visited several points in Pernambuco coast.

However, the best areas of Recife also kept my attention, starting with the beach of Boa Viagem, where my hotel was located, and I took the great part of my swims.

A strong effort is being made in the historical area of Recife, recuperating its most beautiful buildings. Before leaving Portugal, a friend told me that he didn’t like Recife, because it was old, degraded, and dirty, but everything has a negative and a positive side: those old and degraded buildings they kept, are now the base of the good work that is being done.

And when I remember the beauty of Av. Republica, in Lisbon, and the crazy job they did, replacing the old, degraded buildings by impersonal blocks, I must celebrate the Brazilian decision to keep the historic area, even with the bad look it still has here and there.

Also called Palácio do Campo das Princesas, this palace is, as expected, one of the most imposing buildings in Recife.

Created in 1841 to replace a Dutch palace, it faces a beautiful garden with a famous African tree, that is a rarity in Brazil – a Baobab.

The real town pulses around this market, more than one century old, in old Recife.

All the nearby streets are filled with popular shops, and this is the area to meet the real Brazilian life.

No need to alert that this is one of the areas where the usual precautions make more sense, as someone had the gentleness to alert me, seeing my cheap camera in my hand (well tight…)

An old detention house, closed in 1973, was transformed under Brennand’s supervision, in a shopping mall.

The architecture was preserved, and the cells were occupied by dozens or small shops, selling local crafts.

Even where interior walls were removed, to allow a little bigger shops, the look was maintained, only two lifts give a dispensable sign of modernity and comfort, in contrast with the strong grills in the center of the building.

We stayed at Boa Viagem, and we took there most of our swims. The beach is long but not spectacular.

The long reef along the coast protects from surf and sharks, but risks to make the bath very monotonous, specially in low tide, when it becomes almost a pool.

People throws everything to the sand, but the local authorities make a good effort to clean it each day.

​The beach closes very early – at 5PM, but at 6AM it’s already a pleasant bath.

S. João Castle
​
A fabulous collection of historical weapons, presented in a castle with a very well elaborated display.

The furniture, pictures and decorative elements are very well integrated giving to the collection a softness and delicacy that smooths the aggressive character of the items, and the density of its richness.

Photo is not allowed inside, and that’s my only complaint.

Pinacotheca
​
The main building houses a collection of art, focused in the influence of Netherlands in Brazil.

It’s a rich and beautiful collection, but for someone who knows what Portugal meant to the history and art of Brazil, it gives the idea that the Portuguese-Dutch conflict subsists.

Garden
​
The good art collections spread by two buildings, are surrounded by a large garden, where art also makes its appearance.

A lake and swans give life to the whole. Nice!
​

The factory
​
An old factory of pottery was transformed by its owner’s imagination in a personal museum.

The integration of the old buildings with the new forms and look, was very well conceived, giving a constant sensation of balance between tradition and modernity.

The exhibition
​
A large area of the factory is covered by all kind of shapes coming from Brennand’s imagination. It’s such a wide display, that you barely notice most of the pieces. And, a strange thing, they don’t seem very interested about… selling. I only saw a small shop, with some banal pieces at medium price. Another missing point is a circuit to visit the working factory.

We may see the workers here and there, but a ban at the door tells us not to enter. Well, art is beautiful, but work is not unworthy.

The Garden
​
Most of the best work of Brennand is exposed in the garden.

The Taj Mahal is the central volume, and the fountains and walls frame it very well.

​Fishing from the reef

The open water is dangerous, and no swim is allowed past the reef, in Boa Viagem.

In low tide, it’s easy to walk on the reef, and some locals use to capture some fish from it, and, by what I saw, sometimes big catch!
​

It is not Recife, but it so close and so connected, that everybody visits it from Recife and it would be a “crime” if I skip this information.

Olinda deserves its own page, and you just need to follow the link.

Back to Recife page
in Recife
| Tags: To see